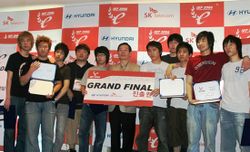 The 2006 IEF, or International e-Sports Festival was held from September 28-29, 2006 in Shanghai, China.[1][2][3] It was composed of 16 players, eight from each country, after a preliminary qualification process.[4] The Chinese qualifiers were held in a number of major cities to select the strongest national representatives, while Korean preliminaries progressed from April through July for the September grand finals.[5][6]

Alongside the StarCraft competition, tournaments for Warcraft III, Guild Wars, and Counter-Strike were also held.[7][8]

The tournament was the second in a series of collaborative tournaments between the two nations, following the 2005 CKCG.

$20,000 was awarded among the top placing players according to the following distribution:[11]

Along with Warcraft III, Guild Wars and Counter-Strike, the total prize pool for the four games was $72,000.

The Group Stage enabled the top eight finishers to advanced to the Elimination Stage:[12]

WE.Super
September 28, 2006
Lost Temple
Luna the Final
Into the Darkness 2

NaDa
September 29, 2006
Lost Temple
Luna the Final
Into the Darkness 2

iloveoov
September 29, 2006
Lost Temple
Luna the Final
Into the Darkness 2

iloveoov to win the tournament in three games in the finals.