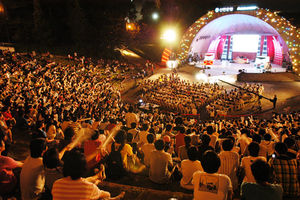 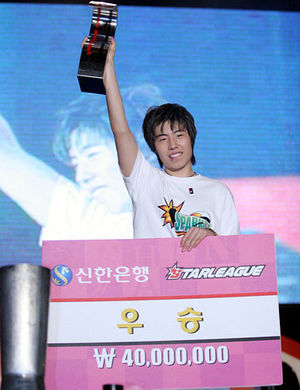 The 2006 Shinhan Bank OSL Season 1 was held from April to June, 2006. It was the second of four OnGameNet Starleague (OSL) tournaments sponsored by Shinhan Bank.

This tournament featured a sharp increase in the prize purse from ￦60,000,000, which was the total cash pool of the past several OSLs, to ￦110,000,000, thus representing an almost doubling in rewards. This increased prize pool would be a trend that continued for the next several years, perhaps as a result of consistently high television ratings or the appearance of more lucrative leagues such as the over ₩128,000,000 cash purse of the 2004-2005 KT KTF Premier League.[1]

This OSL is best known for the Cinderella story that is Casy's OSL win. At the time Casy was becoming known as the Neo-Emperor due to his resemblance to BoxeR by displaying strong TvZ and TvT, and comparatively weak TvP. After losing to Nal_rA and ZergMaN, Casy did not advance from his group and was sent to the wildcard matches. From there he was knocked into the Wildcard round's loser group, where he fought for dear life with great micro vs July and an all-in vs Rainbow. Miraculously, Casy landed in a bracket containing no Protoss. After Casy quickly dispatched OGN Sparkyz teammate Cloud, an even greater miracle occurred when all the remaining Protoss were eliminated. The semifinals saw a series where Casy reinforced his image as the Neo-Emperor by defeating KT's YellOw with his micro intensive TvZ. Casy went on to face another legendary KT Zerg, ChoJJa, in the grand finals. After four close games, a teary-eyed Casy kissed the OSL trophy having triumphed over ChoJJa 3-1.

Notably, after the completion of the three 2006 Shinhan OSLs, the winners were invited to compete against one another at the 2007 Shinhan OSL Masters.[2]

*Players who were seeded

The preliminary group round was played using a four-person round robin format with best of one matches. The top two finishers from each of the six groups advanced to the elimination bracket. In addition, those who did not qualify out of the group stage participated in a "Wildcard round" where the top four joined the 12 who had already advanced directly.

These 16 players then competed in a single elimination bracket where the Round of 16 and quarterfinals were a best of three format while the best of five format was used for both the semifinals and finals.

Group Stage Round of 24[edit]