The 2006 Shinhan Bank OnGameNet Starleague Season 2 was the 20th OSL and the third sponsored by Shinhan Bank. The tournament featured the return of the players who achieved a top six placement in the previous season: Casy, ChoJJa, YellOw, JJu, ZergMaN, and Iris. The 18 remaining spots was awarded via the i-Station OnGameNet Dual Tournament. The event had a live finals and award ceremony on Jeju Island.[1][2] 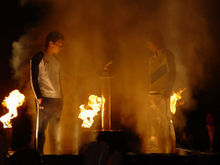 NaDa and Anytime face each other before the finals.

The 2006 Shinhan Bank OnGameNet Starleague Season 2 was played during the fall, which is traditionally won by a Protoss according to the Legend of the Fall. The Legend of the Fall candidates for this OSL were Bisu, Rock, TT, and Anytime, who happened to have won the last OSL played during the fall. Both Bisu and TT got knocked out in the round of 16, and Rock got knocked out by Goodfriend in the quarterfinals.

Anytime got second in his group, only losing to Midas and having a very close match against Casy on Arcadia 2. Anytime also unexpectedly crushed July on Tau Cross. Anytime had a close series against both GGPlay and GoRush in the round of 16 and quarterfinals respectively, except for game 1 against GoRush on Arcadia 2 where he made Protoss look powerful against Zerg, despite the match-up not looking like that for a long time. In the semifinals, Anytime faced Midas who was considered to have the best Terran vs Protoss at the time. After a close five game series, Anytime made it onto the Grand Final.

This OSL also saw the resurgence of NaDa who was after his third title. The year 2005 had started out well for NaDa. After he won the IOPS OSL against July in the finals, NaDa dropped early out of both UZOO MSL and EVER 2005 OSL in the following seasons. But the worst was just around the corner. On the 18th of July 2005, FiFo reported that NaDa's dad had been killed in a car accident. An intoxicated driver preformed an illegal U-turn and collided with NaDa's father.[3][4] NaDa was withdrawn from the Pantech & Curitel Curriors roster for the next two months giving him time to come to terms with what had transpired.[4][5] About 2 weeks later, NaDa posted a poem on his fan café. In the poem one of things he stated was that he was going back to Seoul and practice, "[...] I... I'm going back... don't worry... I'm going back to the real NaDa... [...]".[4] In the first game after NaDa got back, he dominated Nal rA. NaDa lost to ClouD in the winners game but crushed Nal_rA once more. After that NaDa fell into a slump once again, only winning around 50% in Proleague and getting knocked out from both the ODT and the MSL Survivor. NaDa started out in 2006 with a bang, going on a 5-game winning streak and passing the first stage of the 8th MSL Survivor. Then, thanks to an expanded league, NaDa defeated Shark and Nal rA in the i-Station OnGameNet Dual Tournament to qualify for the 2006 Shinhan Bank OSL Season 2. At the same time, he qualified for the 2006 Pringles MSL Season 2. NaDa was back in both major individual leagues.

NaDa crushed his group going 3-0 against Jy, Light and ZergMaN. In the round of 16, NaDa faced TT, the series was very one-sided in NaDa's favor, only losing game one to a 2 Gate in-base proxy that went unscouted for too long. Before reaching the Grand Final NaDa demolished both ZergMaN and Goodfriend, 2-0 and 3-0 respectively in the quarterfinals and the semifinals.

The Grand Final started out on Tau Cross where Anytime did Reaver and High Templar drops on NaDa's expansions. NaDa lost the game mainly due to not having built two Missile Turrets at his expansions. In the second game, on Shin Peaks of Baekdu, Anytime went for a proxy Gateway opening but NaDa's wall blocked the Zealot from doing anything. Anytime went for a second proxy, this time a Robotics Facility, but NaDa got a scout out and saw it before it could hit and he played safely for the rest of the game, giving him the win. In the third game, on Arkanoid, NaDa performed several drops and relied on his macro abilities while Anytime engaged badly. The constant chipping away at Anytime by NaDa forced him have to type out of the game. The fourth game was played on Arcadia 2, on which Anytime was practically unbeatable.[6] Anytime took a solid game forcing the series to a fifth and deciding game on Tau Cross. NaDa opened with a Vulture drop and simultaneous Vulture harass at Anytime's natural. Anytime had perfect defense and lost minimal Probes. After the defense, Anytime saw an opportunity and went for fast Carriers. NaDa caught the switch with a Scan and pushed. Anytime was dead before the first Carrier was out on the map.

NaDa won his third title, and became the first player to ever receive the Golden Mouse.

Notably, after the completion of the three 2006 Shinhan OSLs, the winners were invited to compete against one another at the 2007 Shinhan OSL Masters.

The seeds are divided into six groups. The first seed goes to Group A, the second to Group B etc. The first seeded player gets to pick a player first, the other seeds then pick in descending order. After all the initial picks are done, the picked player in Group F starts. The order reverse one more time until all players are in a group. 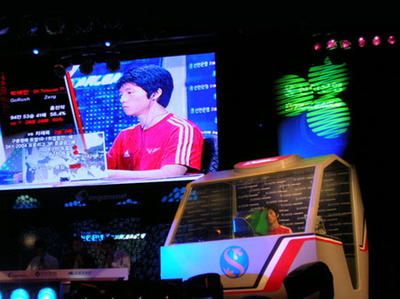 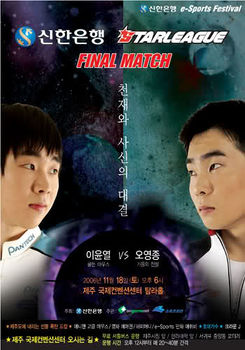 The official poster for the Grand Finals between Anytime and NaDa.