After the highly successful Razer TSL the fans screamed for another season. 1 year and 5 months after the finals were done their cry for more was met. TeamLiquid announced another season of TSL, with PokerStrategy.com as the sponsor.

PokerStrategy.com is a poker-site aimed at learning players who are new to the game how to improve and make a profit their gaming, they offer new sign-ups $50 added to their account at different poker sites after answering a quiz at their site. Since StarCraft players earlier have been proven to do well in the poker-world, they saw this as an investment.

Not only did PokerStrategy.com give away all the money for the prize-pool for this tournament, they also gave fans the opportunity to compete for an all expenses paid trip to South Korea and witness the OSL-finals live.

The total value of the prize pool available for players was, for a StarCraft tournament, a staggering $22,500, the money was divided as follows:

This can be put in perspective when again glancing at the 2008 Razer TSL that was widely popular and praised for its high prize pool, the total prize pool in the previous TSL was $10,000, as much as the winner in the PokerStrategy.com TSL would be winning. 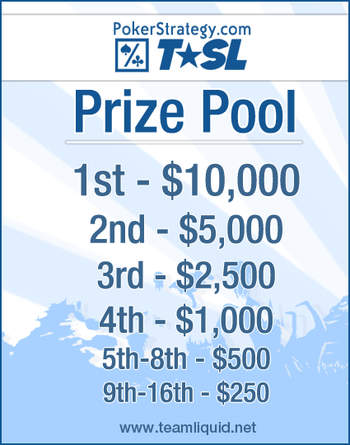 The top three finishers from the 2008 Razer TSL, IefNaij, Draco and Brat_OK, were seeded into the bracket stage of the tournament. The fourth place finisher, NonY, played the number 1 finisher on the ladder, IdrA, for a chance to qualify directly into the bracket stage. IdrA won the game and NonY got pushed into the qualifiers where he showed that he had not lost his magic and managed to move on to the Ro16.

While Draco and Brat_OK did not manage to get past their round one opponents, both IefNaij and NonY did quite well for themselves in the upper bracket. IefNaij managed to beat the Mexican terran hyped by Artosis, GosITerran, and White-Ra to reach the semifinals. NonY also got to the semifinals by beating both KabaL and IdrA, the latter being a really big scalp for the American protoss.

So it came down to the upper bracket final, the semi-final of the tournament. Two North American protoss players who had been inactive for a while. On the 20th of February the two faced off in a Bo5, with Artosis and Tasteless casting. After 4 fairly one-sided games NonY came out victorious and headed to the finals where he will meet another old-school player, German zerg Mondragon. On the 28th of February 2010 it was time for the American Protoss to defend his honor in a Bo7 finals. He showed off his mental strength and managed to come back from being down 0-2, taking home the 10,000 USD with a 4-2 victory.

The qualifier consisted of three rounds, who played who was decided based on the final ladder results.

Along with the already qualified players Draco, IefNaij, Brat_OK, the winner from IdrA vs. NonY, this results in a 16 players bracket.

The end of the ladder stage was overshadowed by an unexpectedly large number of disqualifications, mostly due to transferring stats onto another account and playing against that account which was run by a friend then. See: