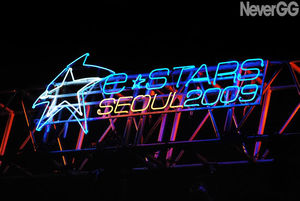 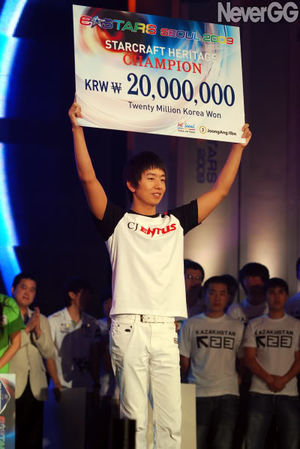 The 2009 e-Stars Heritage League was held in July 2009 in South Korea as a special invitational event.

The 2009 e-Stars Heritage League was composed of ten older "All-Star" players spanning StarCraft history, including the likes of BoxeR, YellOw from earlier years to NaDa and sAviOr of later years, most of whom were Starleague champions. Some of the anticipated match-ups included that of BoxeR vs iloveoov as teacher and student, respectively; BoxeR vs YellOw as long time rivals; and ToSsGirL vs the male players in a battle of genders.

Alongside StarCraft, competitions for Warcraft III and Counter-Strike were also held.[1][2]

Although BoxeR and YellOw advanced to the final round, the younger players, sAviOr and NaDa, would prevail in the semifinals. The two latter players dueled in the championship match in the best-of-three, thus reminiscent of their several rivalry in 2006-2007, such as at the 2006 Shinhan Bank OSL Season 3 and 2007 Shinhan OSL Masters. At the 2009 e-Stars Heritage League, sAviOr would prevail, 2-1, to win the title.

The Group Stage matches were played as a round-robin, best of one format between five players in each group. The top two players advanced to the Elimination Stage. The elimination play-offs was a four-player single elimination bracket with a best of three format.

Additionally, ₩10,000,000 was donated to charity. Information concerning further cash prizes for other top finishers is not readily available.

The top two finishers in each league advanced to the Elimination Stage.