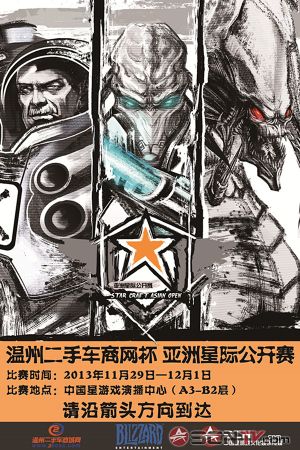 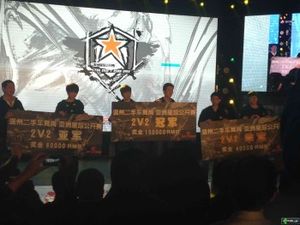 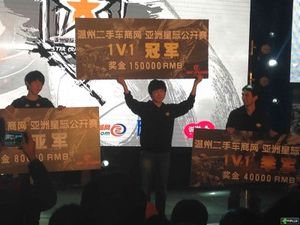 The 2013 StarCraft Asian Open was a tournament held in Shanghai, China in late 2013. The organizers described the tournament as a collaboration between China and South Korea, with players from both countries competing. After initial online preliminaries in September and October 2013, the offline finals were held from November 29 through December 1, 2013.[1]

The finals were streamed online with live Chinese commentary by SCNTV. The ￥568,000 CNY tournament prize purse was one of the largest in the post-KeSPA era.

The tournament was also notable for the selection of sAviOr, whose participation drew some attention and ire from Korean audiences, as this would be one of the first and only public competitions in which he competed since being banned by KeSPA in 2010.[2][3]

The participants in the grand finals would be composed of competitors from the online preliminaries, South Korean invitees, and special sponsor selections. The allocation of players was as follows:

*Players who switched/picked races based on match-ups and map

From September 22 through November 16, 2013, the qualifiers were held. For the preliminary 1v1 qualifiers, the rounds of 128 through 32 were played in groups, MSL Survivor style, with a best of one format. The round of 16 through semifinals were then a single elimination bracket with a best of three format used in the round of 16 and best of five used in the semifinals and third place match.

The top four individuals and teams then played in a single-elimination bracket, including a third place match. All matches were best of five until the championship matches, which were best of seven for both the individual and team divisions.

pic in seven games to earn the team championship, while

beast in five games to earn the individual championship.