On 13 December, Monkey3 Music was announced as the title sponsor.[3] On 25 December, Monkey3 Music and Sonic decided to cancel their contract following a disagreement surrounding proposed changes by Monkey 3 Music.[4] Following the breakdown of the sponsorship contract, the event was sponsored by Sonic's own company, Sinbal Farm.[5] However, on 8 January, following the success of the group selection ceremony, a new sponsor stepped in, Humanworks.[6] Blizzard will help by promoting the tournament through their official homepage and social network. Official commentary was provided by Kim Carry, Lee Seung Won, and Sonic.

A broadcasted group selection was held on 4 January, 2014.

In the post-KeSPA era, there have been very few reoccurring tournament series featuring former professional players, such as the SonicTV BJ Starleague (SSL). SSL 9 featured one of the larger purses and strongest fields of its time, with two-thirds of the 32 player field having had previous OSL or MSL experience. The competitor roster spanned the strongest players of the day, such as Bisu, Killer and Sea, to rising younger stars who had cultivated a large fan-base streaming on Afreeca, such as Mong and Larva, while including a few older names who, although past their peak, channeled forth fond memories from yesteryear, such as Midas and Zeus.

With this star power, and many of the touches of a Starleague, such as corporate sponsorship, live broadcasted group selection ceremony, offline preliminaries and group stages at a broadcast studio, the grand finals held at a large auditorium, endorsement and support from Blizzard, high production value with multiple cameras, Korean pop music performances, and even Stargirls, the SSL started to resemble a Starleague from years past.[7][8][9][10] 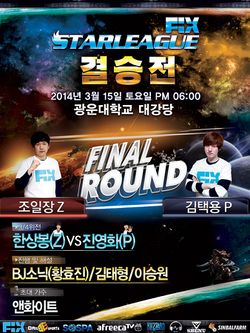 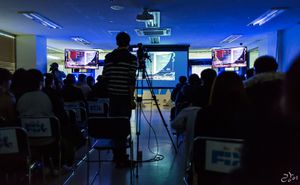 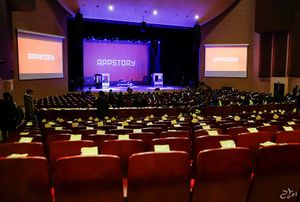 Around 18,000,000 KRW, including 4,000,000 of sponsor's store gift vouchers, were spread among the top placing players according to the following distribution:

*Mist was replaced after the first match due to issues with minerals on one of the spawns.

The Round of 32 proceeded, by and large, uneventfully, with most players who were expected to advance doing so.

In group A, however, Killer, the reigning champion was upset by Mong. Although ZvT was Killer's weakest match-up (post-KeSPA career 54% ZvT win rate[11]), it was still surprising to see the Zerg powerhouse eliminated from the tournament in a best-of-three. After winning their best-of-three in the opening match, Killer dueled against Mong again during the final match, in another best-of-three. During their last game on Fighting Spirits, Mong took advantage of his economic superiority to starve Killer in at 30-minute duel.

Group B saw the return of Midas in his first post-KeSPA appearance, but he would fail to advance. The other members of the old guard, Pusan, Zeus, and ZergMan, also did not advance from their respective groups.

In group F, JangBi made his first SSL appearance to great fanfare, having built a large Afreeca following. In the opening match, however, JangBi was defeated by Larva in the Zerg player's strongest match-up (post-KeSPA career 57% ZvP win rate[12]) in two consecutive macro-based games. JangBi, however, did manage to advance from the group after defeating Lazy in the final match.

With a plurality of Protoss players in the Round of 32, four Protoss found themselves positioned in group G. Shuttle (post-KeSPA career 55% PvP win rate[13]), an Afreeca fan favorite, was defeated by Mini (post-KeSPA career 42% PvP win rate[14]) in all three of their games, first in a best-of-three opening match, and again in the final match. In the last deciding game, Mini successfully powered his Reavers to victory over Shuttle's High/Dark Templar tech.

Group H saw the first SSL appearance of Bisu. The popular Protoss player did not disappoint in advancing from the Round of 32 by defeating Ample and Jaehoon without a loss. Sea was defeated by Jaehoon in their opening match, thus avoiding a highly anticipated match-up with Bisu. Shortly thereafter, however, Sea would avenge the loss in the best-of-one final match to advance by overwhelming Jaehoon's Carriers with a stronger economy.

The Round of 16 saw a slew of challenging group compositions, with a number of upsets.

In group A, Sea was eliminated by Movie as the Protoss player won three of their four games, spanning both the opening and final matches. Movie (post-KeSPA 61% PvT win rate[15]) made effective use of Reavers (both dropped and proxied) in most of his victories.

Group B saw Bisu advancing undefeated. Meanwhile, sSak was eliminated by Kwanro after losing three of their four games, twice in the opening match, then again in the final match. sSak, whose weakest statistical match-up is TvZ (post-KeSPA 57% TvZ win rate), struggled to counter the stronger play of Kwanro, including a long 30-minute duel in their last game where Kwanro prevailed with a stronger economy.

In group C, HiyA and Mong advanced, both defeating ZerO along the way with strong Bio terran play.

Group D saw, perhaps to many fans, two upsets with JangBi and PianO both eliminated. JangBi lost two straight matches to Larva (opening match) and PianO (losers' match), showing his rust along the way. PianO was then defeated by Larva in the final match by an effective Zergling and Mutalisk timing attack. 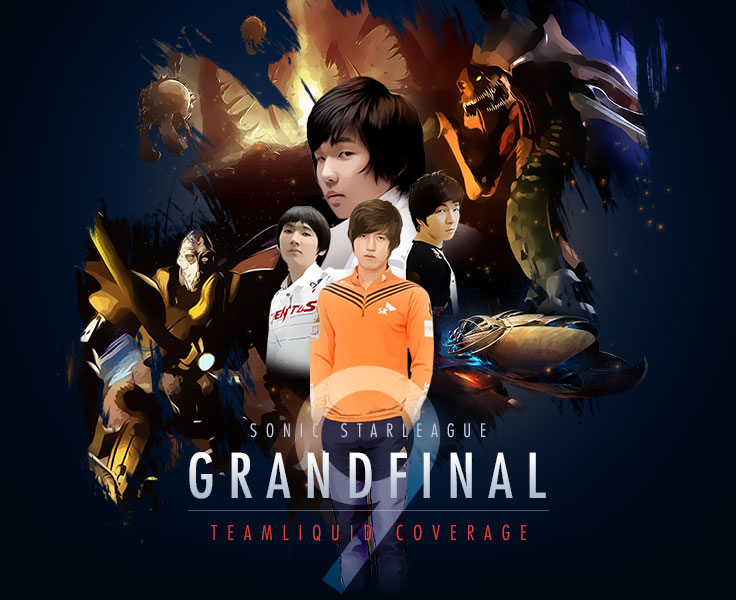 The play-offs saw a continuation of the strong play from the group stages.

hero endured playing just one short of the maximum number of games, 14 of 15, to reach the grand finals. Along the way, hero (post-KeSPA 47% ZvT win rate[16]) defeated Mong (post-KeSPA 60% TvZ win rate[17]) in a very tight series with hero relying on Hive-tech throughout, whether it was two-base Guardians or early Ultralisks, against Mong's largely Bio army. In the semifinals, hero (post-KeSPA 73% ZvP win rate) defeated Movie with a number of mid-game Hydralisk pushes before ending the series with two-Hatchery Mutalisks.

Bisu advanced to, and won, the grand finals on the back of his PvZ play, his strongest match-up (career 72% PvZ win rate[18]) with three consecutive Zerg opponents. In fact, 14 of the total 20 games Bisu played in SSL 9 were against Zerg opponents. Bisu endured a scare in his quarterfinal match against Larva, losing two games to Zergling run-by's before defeating Kwanro without a loss in the semifinals.

In the grand finals, Bisu defeated hero in an exciting best-of-five. In an engrossing game four, hero, seemingly behind, used a series of Lurker attacks and drops to starve and defeat Bisu. Game five saw Bisu opening with an aggressive two-Gateway build to harassed hero's two distant bases in alternating fashion to force the surrender. On his way to victory, Bisu went 15-5 (W-L) for the duration of the tournament.