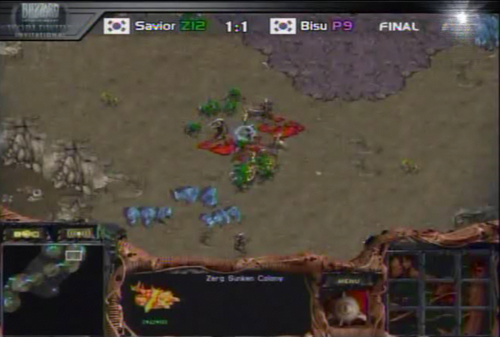 The "Two Gateway" Build Orders summarize different openings, which aim to put pressure on Zerg early on with a Zealot rush off one base. While all Build Orders are somewhat aggressive, some of them sacrifice economic advantage by stopping (cutting) Probe production more than others. Builds which include a temporary Probe cut are usually considered to be an All-In, due to their highly risky character.

All Build Orders follow the same underlying idea to train Zealots as fast as possible. The Build Orders themself vary only little.

The term "Proxy" refers to buildings, in this case Gateways, being positioned far from the main base. This can either be at the Natural Expansion or in the middle of the map. Proxy Gateways are build farther away to minimize the walking distance between the own base and the opponent, thus making a rush even faster and more threatening.

The following versions of the Two Gateway openings are considered to be rather aggressive.

The 10/12 Gateway is a safer version of a Two Gateway opening. It can be played as proxy or as ordinary one base version.

The Execution of a "Two Gateway" Strategy does depend on the maps and the intention of each specific Build Order. Generally speaking, Protoss usually tries to train Zealots as fast as possible.

In case of the Build Orders listed as aggressive, the player will try to attack as fast as possible, which means a greater risk. If no Proxy Version is used for 9/9 or 9/10 Gateways, the Protoss can delay his first attack by a few minutes, to make sure he can block his choke point (usually ramps) and prevent backstabs and runbys. However, if the Protoss went for Gateways not blocking choke points directly, his buildings and his economy will be open to harassment, if the Zealots do not pose an immediate attack. If the Zerg opened with a 4, 5, 6 or 9 Pool (with or without Speedupgrade), Zerg might be able to attack the Pylon powering the Gateways before a Zealot is out to defend. Building Proxy Gateways in the open map should therefore be done very carefully. Zerg must not scout the position of the Gateways with Overlords or a scouting Drone. At the same time a Proxy Gateway loses its strength if the opponent is not scouted right away, which is the reason why Protoss uses a second Probe to scout on large four player maps.

For 9/9 or 9/10 Gateways the first (and the optional second) Probe is used as supporting to unit for the first two Zealots attacking Zerg. Against Zerglings the Probe and two Zealots can one-shot a Zergling; even if only one Zealot is used (in case of a 9/10 Gate), the Probe will deal additional damage. The aggressive openings can use more than just two Probes, which increases the risk for both sides, as a failed defense or attack will end the game right away.

The 10/12 Gateway version doesn't stress the economy as hard as the other versions, as no temporary Probe cut is needed. A player can transition out of this opening by either going for a Nexus or adding an early Assmilator to tech on to stronger units. In this scenario a larger Zealot group should pose a threat to the Zerg Natural expansion, thus forcing the Zerg to invest Drones into static Defenses and Zerglings and stalling his Tech. This does need some experience, as Mutalisks and Lurkers will hard counter the opening. Knowing when to attack and when to retreat is pivotal.

A 10/12 Gateway opening with the Gateways blocking the entrance to the Natural Expansion can be a strong opening on special maps such as Longinus. The Gateways can be easily defended by only one Zealot in rare cases and thus be as effective as a Forge Fast Expand opening. This makes the transition out of the opening easier, as only little units are needed to defend and support a faster Nexus, while having the opportunity to pressure the Zerg if he acts careless.

Any Two Gate version with Gateways being build inside the own base are less effective and more vulnerable to backstabs and runbys if more than three units are needed to block the entrance. This is the case for larger ramps on maps like Andromeda, Blue Storm or Luna.