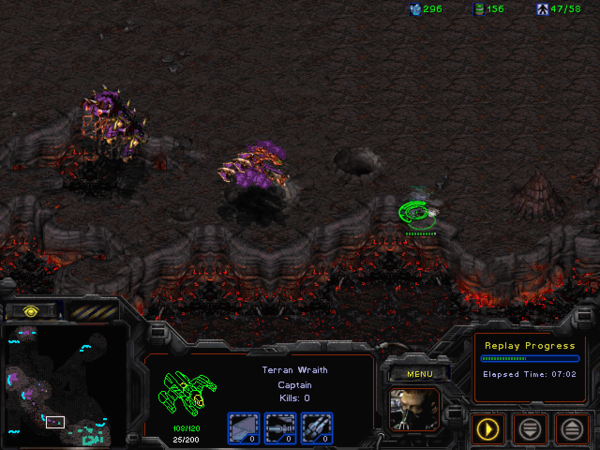 This article will focus on the 2-Port Wraith used in TvZ. 2 Port Wraith was originally popularized by ElkY defeated GoRush in the Loser Bracket Finals of WCG 2001. In 2008 and later, 2-Port Wraith build has been put into frequent use by Leta and Lomo. The key and the effectiveness of this build relies on quality of Wraith control, for a Wraith Micro Training UMS Map see the thread Grobyc's Micro Pack. If used correctly it can harm the Zerg's economy which gives Terran the advantage for mid-game and late game. After the Wraith opening the Terran can transition into Mech or Bio. If the harassment fails or is not substantial then the resources gone into the Wraiths can put the Terran behind.

Then transition into a Mech build or a Bio build. By watching the Zerg's progression you can alter your Engineering Bay and Academy timings.

As you will not be making many Marines early game you will be weak to all-in Zergling rushes, correct Walls can help you defend against such attacks. The Terran Walling Guide provides information on Zergling safe walls.

Build 2 or 3 Vultures to harass the Zerg while the Wraiths are being built. With good Vulture and Wraith harassment you can damage the Zerg economy enough for an easier mid-game and late-game. Some players build the Factory outside the base, closer to the enemy so that the Vultures can reach the base faster and do more damage.

The Zerg will usually respond with Hydras and Mutas and after you have 2 or 3 Wraiths the Spire will be completed, however this is not a set rule.

The most common transition is into a strong M&M build as the Zerg will respond with Hydras. M&M are strong against Hydras providing they are not behind in upgrades. If you do want to transition into Mech you will have to rely on Vulture harass to distract the Zerg whilst you get a strong Mech army, this takes some time because the 2-Port Wraith Build is already gas heavy. Hydras can also fare better against Mech than M&M.

Use your Vultures and Wraiths to do as much harassment as you can. Do not get carried away with the Wraith Micro otherwise your Macro will suffer and you will not have enough units to survive a Zerg push. If you spot a Spire then build an Engineering Bay and build turrets so that if you are transitioning into Bio your Marines can't get picked off. However, do try and secure your natural as staying on one base whilst building Wraiths and a starting main army can be hard to achieve. If you see an Evolution Chamber be careful not to lose your Wraiths to Spore Colonies as they can be hidden by Overlords. A common timing for Wraith Cloak is after you have 6 Wraiths (the Add-on allows for Dropships) however you can delay if you feel that your harassment is working well, then spend the rest of the resources on building your main army.

If your harassment is proceeding well then the whichever branch you transition into, Mech or Bio, will finish off the game. However, if you are faltering in your harassment then upgrading Cloak would help as it helps the Wraiths to survive against Muta attacks. With good Micro you can pick off Mutas out of Overlord detection range. With the Zerg having put resources into the Mutas the ground force will not be strong however a push with both Mutas and Hydras can run you over. The Zerg may transition into Lurkers so by proper scouting with the Wraiths you can get an Academy built and be ready to scan for Lurkers. You could also use the Wraiths to pick off Lurkers. If you see a Queens nest then do try and snipe the Queens as they will most likely be used to Ensnare your Wraiths which means they can get completely wiped out.

If it gets to Late Game it means that your Wraiths are now insignificant and you will transition into a Mech Late Game or a Bio Late Game. The Terran Strategy article can give advice for Late Game.

Clustering your wraiths together to make them fire and move seemingly as a single unit is very important for effective harass. To do this, you need to select your Wraiths in addition to another unit that will remain far away from them and/or not able to respond to the commands that you only want your Wraiths to execute. As a Terran, there are multiple units that can fit this role:

Some maps like Neo Medusa have a cliff edge behind the Minerals so it is easier to pick off Drones as the Hydras will not have vision or enough range. Maps like Python which have an open area around the Mineral patches are harder to harass so keep this in mind when choosing to use this Build.

Do not solely rely on your Wraiths to win you the game as they are not units that are meant to finish the game. Whilst controlling your Wraiths remember to Macro as failure to do so can mean that you do not have a strong enough army or have sufficient Tech to survive.

https://tl.net/forum/viewmessage.php?topic_id=93697 - A TvZ micro map including Wraiths vs Scourge and Mutas.