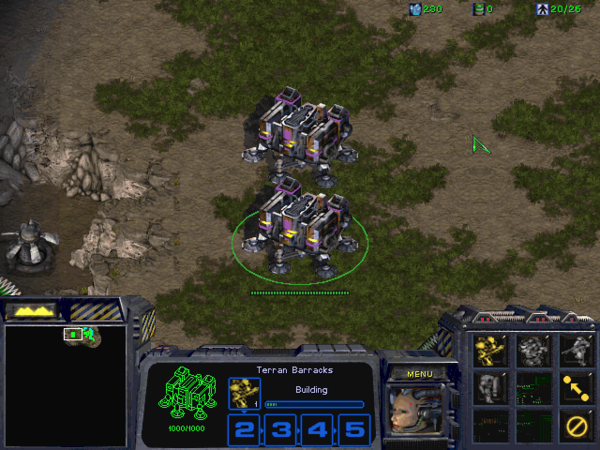 The 2 Rax build is a build that was very popular before the introduction of the 1 Rax FE. Modern adaptations of the build generally use this build to force the Zerg to spend a significant amount of money on Sunken Colonies by faking a Marine/Medic push and then, instead of continuing to pump units as in older versions of this build, taking an expansion to enter a macro game. In addition, it allows for an easier defense against the 9 Pool opening.

This build is the original incarnation of TvZ fast expand made by iloveoov in 2003. To this day it remains very strong against 2 Hatchery builds and is underused in this regard. However, because of the slower Command Center and oftentimes useless early second Barrack, it is significantly weaker than 1 rax FE against 3 Hatchery Mutalisks, which caused its overall decline in popularity.

This is a strong build on maps where Zergs normally 2 Hatch. Some examples include Destination and Raid Assault.

This is a weaker build on any map where Zergs normally 3 Hatch. Some examples include Arcadia and Loki.

The goal of this build is to force the Zerg to overinvest in Sunken Colonies, fearing a sunken break, while the Terran expands instead. Remember that this build does not look any different from a Sparks Rush. Therefore, if the Terran allows the Zerg to see neither their base nor their full army size, the Zerg is forced to assume that they are doing a Sparks Rush and overcompensate on defense in response. Having to build 4-5 Sunken Colonies in a 2 Hatch Muta build is very taxing on the economy and if they skimp on defense they can easily be punished.