3 Base Spire into 5 Hatch Hydra (vs. Protoss)

Three Base Spire into Hydra 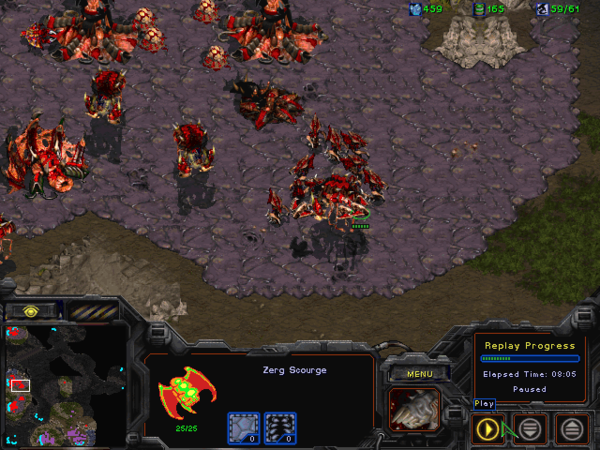 In contrast with the traditional 4 Hatch before Gas build, this build delays the economic boost, but it allows the Zerg to take the initiative, and thus control the pace of the game.

By reaching Lair tech faster, a Zerg player is able to effectively halt heavy Corsair play through the use of Scourge while maintaining a sizable economic advantage. This build is the most versatile build in the Zerg arsenal, and has become the standard for today's Zerg versus Protoss.

It has evolved to significantly counter much of the harass play that is common from any Stargate-involved build order, such as the Bisu-build or perhaps even Sair/Reavers. The mutalisks are for templar sniping (and also probe picking), and the hydralisks pumping from five hatcheries engaging a relatively small 2/3-base Protoss should easily win any ZvP game if done correctly.

Note: Currently, this page is based off a guide by w3jjjj. There is more depth and discussion (including situations where this strategy should not be used) in the extended guide.

For defense, base your ling timing on the Protoss's zealot push/timing. If you did a 12 hatch/11pool and he made a forge before gateway first, for example, you should only make two (2) lings to chase the probe down and then resume drone production until his first zealot leaves the FE/sim-city (as spotted by your Overlord placement)

When this happens, make six (6) more lings to deal with their early aggression. Zergling Speed will finish soon so a three (3) zealot timing-push is no big deal - you can make more lings accordingly, if needed, to counter a zealot timing attack. There is plenty of time until his first few zealots arrive so you should have a wide window-gap. Generally, there is no need for a sunken in early game, speedlings should be enough.

Depending on the opponent's build and the map, these sunkens can be delayed (or placed down earlier depending upon his number of zealots/gateways).

At this point, you want at least 25 drones on minerals and six (6) on two (2) Gas before Hydra production kicks in, so the exact supply count depends upon how many lings and scourge you've made (or plan on making).

Assume the Protoss player played normal with proper cannoning added (when he spots your hydras), added 3-5 gates after Templar Archives, and did not seek to expo early, so therefore you can keep making hydras up to around 80~ish supply at which point you should have 35-45 hydras plus the earlier lings for around three to four control groups of hydra/lings. Get ready for the muta switch now.

NOTE: The 9 minute mark is a good point to do a supply check. For example, if you opened with overpool and did everything correctly with a no rush 9 agreement, at the 9 minute mark you should have 85 supply with 4 groups of hydra/ling, your opponent should have 95 supply with an army of 2-3 archons and 15 ish zealots. Now typically in a real game with early harass and less than perfect macro, you can be happy with 80 supply at 9 minutes, and Protoss can be happy with 90 supply. However, if you have even lower, then there is something wrong with your early execution and you must find it and correct it. No build can be effective if you don't produce enough units. Of course, the supply count at the 9 minute mark varies a little depending on which opening you used, check the opening reps vs computer linked below for more detail.

The location of these Hatcheries can either be both in the main/natural base, or one extra Hatchery at the third base and one at the main. Depending on the map, if the third base is quite far away and harder to defend, it might be an option to place an extra Hatchery there to help defend it. These two Hatcheries can also be placed to form a wall at the third expansion that makes it either hard or impossible for a Protoss player to reach a sunken placed behind the Hatcheries.

Even if you choose not to open with Mutalisks first, once you have your Hydralisk force, it is an essential part of this strategy to build a group of Mutalisk and use it to snipe High Templar. By killing the High Templar, you can ensure your ability to convincingly defeat the Protoss player's army with pure Hydralisks should they decide to push.

You want to get lurker upgrade when you are making mutas. At supply around 110, spend all of your gas on mutas, then get the lurker upgrade. After the lurker upgrade starts, add 2 more chambers to catch up normal upgrades while you get +2 missile attack. Make another round of drones because this is the strongest timing of the 5 hat hydra build, with 1 group of mutas and 4 groups of hydras it is a very safe time to boost our economy a bit.

Now, Assume that all went well and you gained some map control by either denying or at least delaying the Protoss's third expo, when lurkers come out you can play hydra/lurker for a contain while going hive. When you are making those first batch of lurkers, get one more round of drones to saturate your 4th base, and make an additional hatchery so you have 7 in total. At this point, you should have 45 drones now for a very good economy. Unless you have comfortable map control and you want to saturate a new expo quickly, there is no more need for full rounds of drone production anymore, just slowly add a couple here and there from time to time to keep growing and concentrate on units. 7 hatch full units production is equivalent to 9 gateway production and the Protoss will need 3 base running to keep up with your 4.

If things didn't go so well and you have lost map control you will be in a great disadvantage... stop hydra production and make pure lurker/ling and turtle to cracklings then get defilers and drop. Take islands if you can and eventually retake map with upgraded ultra/ling. Note: this is a pretty large uphill battle so don't pay too much attention if your turtle fails, concentrate on perfecting your muta/hydra build so you Don't get into a situation where you can only turtle to survive.

With the current build order, this build is safe against this timing rush. However, Hydralisk production must begin at around 42 supply.

Against this unit composition, the Protoss does not have anything to prevent Mutalisks from sniping his High Templar except storms.