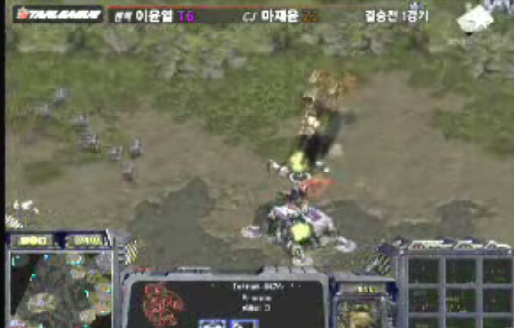 Popularized by sAviOr, 3 Hatch Muta is the most popular early to midgame Zerg vs. Terran build. 3 Hatch Muta has a strong economy and versatility in drone and ling production. Using Mutalisks, Zerg harasses Terran's mineral line, contests medic and marine armies, or both, while getting a 3rd base and Lurkers. 3 Hatch Muta has various transitions, the most common being 3 Base Hive.

Three Hatch Muta (vs. Terran) is a build order meant to give you early map control. This is typically used to take a third base (with gas to support Hive tech) and to transition to Hive (mainly for defilers).

Note: A common misconception amongst newer players is that 3 Hatch Muta is a build meant to kill or severely cripple the Terran player with Mutalisks. While this may work occasionally, at higher skill levels it will rarely be possible to kill the Terran with your Mutalisks alone. The main purpose of your initial Mutalisks is to harrass the Terran and keep his army inside of his base, yielding you map control.

Against a meching terran, 3 hatch muta is arguably the best opening. The reason is because Mutalisks scout, harass, and force Terran to defend. Against mech, your main priority is to build up your econ and take as little damage as possible. Therefore, the main role of mutalisks is to scout and to gain that map control. You need to see his type of tech paths. This will be critical for you because if he decides that he was faking his mech, your mutalisks will still be strong against bio and you can prepare appropriately.

In the early game determine the opponent's build to adapt accordingly. Responses vary depending on whether Terran opens Factory Expand or 1 Rax FE, or any other uncommon 1 base play.

The following are responses to various 1 Rax FE transitions:

In the early game Zerg can tell if Terran is going +1 5-rax by Terran having only 9 or so marines and only 1 medic by the time Spire is placed. If Terran makes a bunker, it's even more unlikely Terran went a 2 Rax build. Later, after Mutalisks are out, Terran will have +1 weapons completed and roughly 16 marines and 3-4 medics. The threat of speed Zerglings alone is enough to deter Terran from pushing. On occassion, Terran will push out, and in that case a minimum of 1, and at most 2 sunkens is necessary.

Zerg must prevent Terran's marine medic ball from reaching a critical mass, otherwise harass will be difficult. If Terran is defensive, prompt a move-out by harassing SCVs. Zerg should whittle down Marine numbers gradually before trying to commit a Mutalisk and Zergling attack on an isolated ball of Marines and Medics. Constantly put Mutalisks between the outgoing Marine Medic army and the Terran's base to delay Terran and catch reinforcements. Preventing Terran from reinforcing the first marine medic ball with a second is critical to dealing with +1 5-Rax.

Zerg can make up to 24 Zerglings and 3-5 sunkens at most. Zerg can make 3 more Mutalisks at most after the first 11.

Terran will have 10 or more marines by the time Spire is placed down, and usually has no bunker.

Crazy Zerg is a less common variant of 3 Hatch Muta that was popularized by Kwanro, Luxury, and YellOw[ArnC]. Crazy Zerg transitions directly from Mutas into Hive and Ultralisks without Lurkers.

The build differs from standard 3 Hatch Muta from the gas timing:

The first Evolution Chamber is built immediately after the Lair is started, followed by an immediate +1 Carapace Upgrade. Zergling Speed is researched during the Mutalisk harass, and a large Muta/Ling force is used to kill Marine/Medic armies of less than 24 units. The high mobility, early 2nd Expansion and early Carapace make Tank/Vessel pushes a liability for the Terran player. Instead, he will most likely opt for a Vessel oriented style of play which you should defend with Sunken colonies and your Muta/Ling army until Defilers and Ultralisks come into play. This build gets a 3rd Expansion in relatively the same time as a standard 3 Hatch Muta build but with an earlier hive and upgrades. The second Evolution Chamber should be built shortly after hive is started because having an Upgrade advantage is very important for this playstyle.

The fast +4 Armor Ultralisk and Zergling force is extremely effective against Marine/Medic until the Terran can catch up in upgrades. This build is especially weak against large amounts of Marine/Medic during mid-game; the lack of Lurkers and relatively small amount of killing power makes map control hard to obtain, especially if the Mutaling flank of the Terran push or the backstab at the Natural fails.

In summary, this build is highly map-dependant. It relies on large, open spaces which facilitate a more mobile army. It also requires an early second Expansion to support quick Upgrades and Hive Timing as well as a strong Drone count, comparable to that of a normal 3 Hatch Muta build.