4 Hatch before Gas (vs. Protoss) 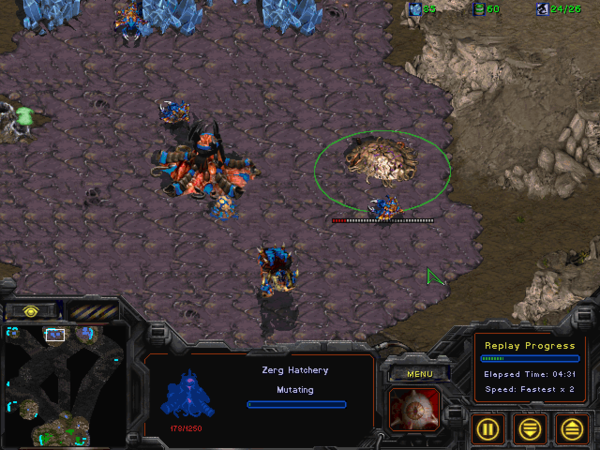 This strategy is one of Zerg's primary responses against the Protoss Forge FE. It is designed to sacrifice teching in favor of Drones, which consequently leads to a much stronger economy throughout the game.

Never neglect building a Spire even if you are using Hydralisks and Lurkers. Scourge are invaluable when it comes to deflecting Protoss drop attempts, lowering Corsair numbers, and sniping Observers.

Stall with large amounts of Zerglings with Sunken support and, if possible, wait until +1 Carapace has finished before engaging the Zealots. If his +1 Attack is complete before your +1 Carapace, your Zerglings will die in two Zealot hits instead of three.

Start Overlord Speed and Spire as soon as possible after Lair while delaying Lurker research. Place Hydralisks at each base and keep Overlords protected while your Spire is building; once you feel safe against the initial harass research Lurker Aspect. Be prepared for Corsair/Dark Templar or even Corsair/Reaver harassment of your expansions. Build Spore Colonies if Corsair numbers become hard to handle with Scourge.

Any one base build.

This build aims to give better economic footing in the mid and late game. However, with the lack of early game units, this build must be played fairly defensively until the mid game.

Note: An early +1 Carapace is crucial to this build. Without it, a +1 Speed Zealot push will be extremely difficult to defend against.