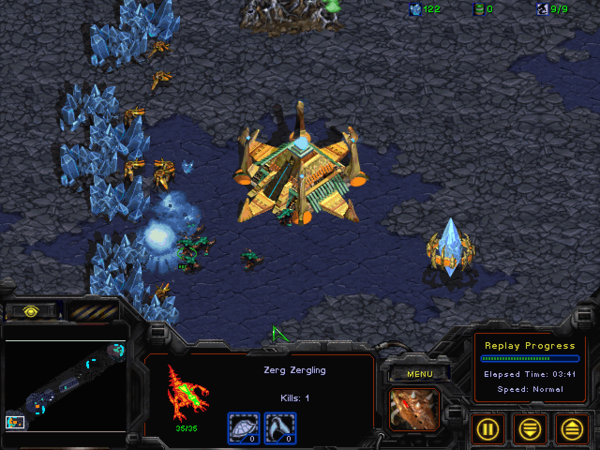 "5 Pool" is the most aggressive build a Zerg player can do to Protoss. The goal of this build is to catch a Protoss player off guard with extremely early Zerglings, and either win the game outright or prevent a Fast Expand. "4 pool"s are never used versus Protoss, while both 4 and 5 pools are used vs. Terran or Zerg. Due to the damage caused to the Zerg economy by a 5 pool opening, it is often considered an all-in move, although it does have limited capability for transitions into the mid-game.

When the Zerglings are about 80% morphed, another larva will spawn and you have a few options:

After your first 6 Zerglings hatch you have a choice. If you feel confident in your rush, you can use the Gas Trick to quickly reinforce your initial Zerglings with an extra two.

If you feel like continuing your economy right away, either save up and create an Overlord immediately, or you can use the Gas Trick to get an extra Drone before the Overlord.

Depending on how many positions are on the map, you shouldn't need to waste a scout to find the Protoss. When playing on large four player maps like Python, if you don't find the player with your Overlord in the beginning, it's worth it to send out a Drone scout to find out exactly where your opponent is. In this situation your economy is already almost non-existent, so your initial Zerglings are going to need to do as much damage as possible, and going to the wrong position in the beginning can completely ruin this build's chances for success.

Generally, by the time your Zerglings get to your opponent's base, your 5 Pool will have been scouted already. You need to focus on taking down his economy (aka probes).

If you manage to do some damage, but not kill your opponent, with your initial lings you have two ways to go:

If you do very little damage, you are very far behind and can expect to see some zealots in your base rather quickly. You could drag the game out but GG is recommended.

Do as much damage as possible with initial Zerglings. Build up your economy afterward and surpass your damaged enemy.