This article refers to 9 Pool without an early gas. For that specific build, see 9 Pool Speed. 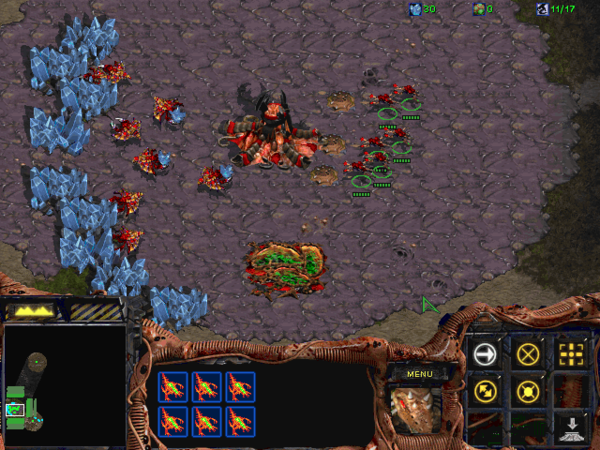 This is an aggressive yet safe opening against Protoss. In the commonly seen Fast Expansion, the Protoss usually sends a scout after building the first Pylon, reaching your base in time to stall or keep you from getting your expansion up. 9 Pool prevents this by getting faster Zerglings killing the scouting Probe and allowing you to expand without any problem.

Also, after scouting a 12 Hatch Protoss players tend to get their Nexus up before any Cannons, which makes you and him to be even in bases, which is a clear disadvantage for Zerg (this may even allow the Protoss to get his Gateway up before any Cannons, which will speed up the arrival of his first Corsair). This BO forces the Protoss to build two Cannons before attempting to get his Nexus and in case he goes for the Nexus first or doesn't block his choke with Probes, you can easily do a run-by and do disastrous damage to his Mineral Line.

On a four-player map, if you haven't scouted your opponent with your Overlord at this point, send this 10th Drone to the closest spawn position. By process of elimination you will be able to tell your Zerglings which base to go to. If your Drone does not scout your opponent at this point, there is little value in sending it to scout the final position, since the Zerglings should be en route by then.

If you have not scouted your opponent by this time, make 2 Zerglings to avoid limiting your options against an unknown opponent. If you have scouted him, gauge whether you need the Zerglings on the anticipated amount of early-game aggression.

When your Zerglings arrive, respond depending what you see:

In terms of midgame build orders, this build can transition into any plausible mid-game strategy. Such builds include:

This build is particularly strong on maps with a wide choke that forces the Protoss to block with more Probes than he would like to. Some examples are:

This build isn't weak on any map. However, the 12 Hatch is generally a better option on a larger map such as Andromeda.