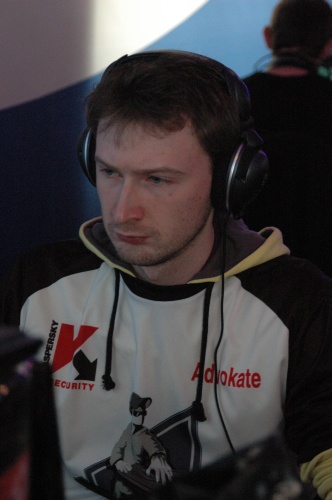 Advokate can be counted among Russia's most known players in the period before the StarCraft II Wings of Liberty Beta. He belongs to the first generation of players, even though he was overtowered by other strong Russian players until 2003. In 2003 Advokate was able to qualify for the World Cyber Games the first time in his career as third place winner of the Russian preliminaries. In the major tournament the Terran advanced undefeated from his group, taking down relatively known players like White-Ra and ret in the process. However, Advokate was beaten in the Round of 32 by the Korean professional Silent Control with a 0-2.

In the years after 2003 Advokate, Androide and Ex dominated the Russian speaking community. The leading trio qualified for many offline tournaments and divided the Russian WCG Qualifiers between them. Although Advokate wasn't able to win one of the WCG preliminaries, he qualified as second for the main events in 2004 and 2005. In WCG 2004 the Terran repeated his solid performance of the year before and advanced as first place from his group, this time beating the eventual runner-up Midas. Two rounds later Advokate was knocked out by XellOs. In WCG 2005 Advokate advanced once again from his group, before he lost in the Round of 16 against Legionnaire. The skill level of the three Russians - Advokate, Ex and Androide - showed in this year. All three Terran could only be stopped by KeSPA professionals.

In the years between 2006 and 2009 Advokate focused mainly on playing in clan leagues and Russian events. He only scarcely participated in major international events, such as The ACE. However, if he did, he regularly finished among the top places. Whereas Androide and Ex slowly started to fade and transition away from Brood War, Advokate remained in the top field of the foreign players. In 2009 the Russian returned with a number of high finishes in several big events: 3rd place in the Valor Starleague, 3rd place WCG Russia 2009, 3rd Place Dreamhack Summer 2009 and gold in ASUS Summer 2009. Especially his win against JaeDong in the Round of 16 of the WCG 2009 added to his reputation, as JaeDong was still in his prime. Theoretically speaking, Advokate would most likely have also qualified for the TSL Season 1, but was disqualified after he abused during its ladder stage[1].

In 2010 Advokate qualified as second Russian for the WCG 2010. In his last major tournament, the Russian was knocked out during the Group stage. Soon after he retired from playing Brood War competitively.

The Terran's style was not extraordinary, but followed the current meta game strategies. However, his high mechanical skill granted him superior control over his army and bases than most other foreigners. Only very few Terran in foreign history could be compared to his level.