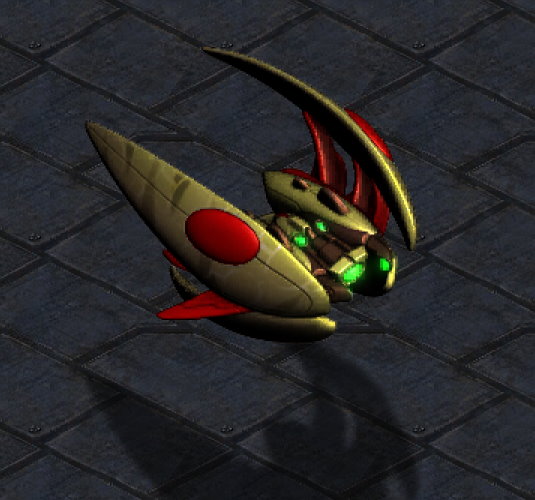 The Arbiter is one of the highest technology units in the Protoss arsenal. It's a support unit with a passive ability which cloaks any nearby units owned by the player. The Arbiter does have an attack; however, this attack isn't very useful, as its low damage and long cooldown means it takes quite some time to kill most units. In addition to the cloaking field, the Arbiter has two different widely used spells.

This ability allows you to break down the opponent's army into several smaller chunks, and fight them separately.

Arbiters do not see much use in Protoss vs Zerg battles, as they are slow, do a low amount of damage, and the cloaking is not useful when Zerg has Overlords almost everywhere for detection. In most cases the Protoss player would be better off building High Templar and Dark Templar with their Vespene Gas. Queens can be used against Arbiters, as they can use parasite to track the Arbiter, and use ensare to reveal the cloaked units.

Arbiters are most commonly used in the Protoss vs Terran match-up. Both abilities are used to great effect in breaking apart the "Terran Ball", the combined blob of upgraded Terran mechanical units which are difficult, if not impossible to break using Protoss ground units alone. Stasis can be used so that you only need to fight half of the "Terran Ball" at once, and their Cloaking Field allows your units to start firing at the Terran units before they can get off a scan. One tip to using Stasis Field is to Stasis the units in the rear. This will make your attack more effective since the Siege Tanks in the rear will be the ones your attack reaches last.

Recall is equally effective in breaking apart the "Terran Ball", as it allows you to get many units inside of their base, and force the Terran opponent to split apart their fighting force to defend both the front door of their base and their production buildings and Supply Depots.

Another tactic, although less employed, is using stasis on ramp maps, such as Python and Othello. By casting stasis on a unit on a ramp, the ramp entrance can be blocked. This is often useful immediately after a successful recall into the Terran's main base; by blocking off the entrance, the Terran mechanical army cannot get up the ramp to attack the recalled units. The Terran can, however, use an SCV to "glitch" the frozen unit off the ramp. This is done by ordering the SCV to mine a mineral patch, and cancelling the order when it "floats" on top of the unit on the ramp.

Interestingly, if stasis is used on a worker in gather mode, they cannot be glitched out of the way as described above. This trick can either be applied to fleeing SCVs, or some probes can be recalled for the purpose.[1]

Arbiters are extremely powerful because they force the Terran to make choices it does not want to make. There's no one unit in the Terran arsenal that is a perfect counter to an Arbiter, so a Terran has to retaliate with a multi-faceted approach. It forces the Terran player to guard against Recall by overcompensating with Missile Turrets in the main. It burns through Scanner sweeps until Terran can create Science Vessels to see the cloaked units. This reduces the visibility of the Terran since it can't use those scanner sweeps for more important places. To destroy the arbiters themselves, Terran must also produce Goliaths when it would rather produce Vultures for harassment. Finally, Stasis Field splits the Terran Ball in the middle of the battlefield reducing Terran's effectiveness. So this one important unit reduces harassment, visibility, and effectiveness of the entire Terran force and creates much pain for the opposing player.

If a Terran player expects to be recalled on, he will frequently place Spider Mines in advance to devastate the recalled units.

Protoss vs Protoss very rarely gets to the point where players can use Arbiters. When it does though, Arbiters can be a much more useful unit than Carriers. In modern play, if a Protoss player goes Carriers, the other Protoss player will often use mind control to steal away control of the Carriers. Arbiters are much less prone to that, as they are likely to be destroyed immediately after having been mind controlled.

Maps like Destination, where a deadlocked split-map will often occur, are more likely to see Arbiters in PvP.