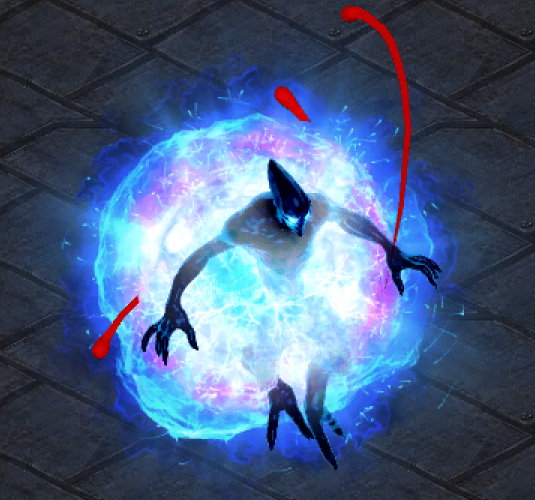 2 High Templar are required to merge into an Archon.

The Archon is a powerful Protoss unit formed by merging two High Templar. The merge itself requires no tech, and can thus be made from extant High Templar if the Archives or Gateway are lost. Archons attack air and ground units with a powerful, short-ranged attack that deals exclusively splash damage. Their robust Plasma Shields and fierce attack offset their short range; Archons devastate enemy infantry forces. Their heavy shields, short range, and fast movement speed synergize well with speed-upgraded Zealots and Dragoons; the three may attack simultaneously with the Zealot in front, followed by the Archon, then the Dragoon.

However, Archons suffer from a high production cost (100 minerals and 300 vespene).

Archons' precursors, the High Templar, are generally more useful with their Psi Storms, which devastate units in a large area. Archons serve a similar purpose through their splash damage, but much more slowly and in a smaller area. Players typically merge Archons after High Templar exhaust their energy; a single Archon available at once trumps two High Templar with no energy. Still, in situations where they are preferred, they can be merged at once from the Gateway.

The Archon's splash damage is friendly; it never harms the player's other units, in contrast to e.g. Siege Tanks and Spider Mines, which damage any units in the splash radius. Like all friendly splash damage, the Archon's attack still damages allied players' units in team games.

Archons have no abilities.

Plasma shields comprise 97% of Archons' health, with only ten true hit points. They can survive extraordinary punishment in conjunction with Shield Batteries, but are helpless if struck by a Science Vessel's EMP.

Players use Archons as support units during the early PvZ matchup. Paired with Zealots (as detailed above), they combine well against Zerglings and Hydralisks. Archons perform poorly against Sunken Colonies due to their bulky size. Zealots surround the structure more efficiently. Archons devastate concentrated groups of Zerglings and Mutalisks, and can counter Mutalisk harassment since the Zerg opponent will often group and stack the Mutalisks. Strong Mutalisk micro can counter Archons by repeatedly attacking and retreating, while evading the slower Archons' damage. Zerg players may also scatter the Mutalisks before engaging.

Archons' splash damage can damage Burrowed Zerg by force-attacking a unit positioned near the burrowed unit with friendly fire; most useful when an Observer is unavailable. This technique can damage any burrowed units, but is most effective against lone Lurkers.

Archons perform well in the late game especially against the popular Zerg combination of Ultralisks and Zerglings. Archons with Ground Weapons upgraded to level two or three will kill Zerglings in one hit, regardless of the Zergling's upgrades. Archons' high damage and splash attack do well against Ultralisks/Zerglings in combination with other units. Zealots often absorb damage while Archons splash-attack the Zerg.

In addition, Archons serve an important role against Defilers; their splash damage remains effective under Dark Swarm. The primary target takes 25% damage; units positioned directly between the Archon and the primary target take full damage. Target the second row of enemies in a Dark Swarm to deal full damage to the first row. Friendly fire can achieve a similar effect with robust micro.[1]. Further, Plague is effectively useless against Archons by virtue of their low health.

During long games, Protoss players often accumulate lots of Vespene Gas, as their infantry units are less gas-intensive than the Zerg, making Archons easier to amass.

Archons, while powerful, are not a staple unit in this match-up. Archons' high total health is composed mostly of Shields, which take full damage from all attacks, including Vultures, Firebats, and Ghosts, which would normally deal only 25% damage to a Large unit. Zealots and Dragoons prove more cost-effective than Archons due to their expense and short-ranged attack. Most Archons in this matchup merge from High Templar who've exhausted all their Energy casting Psi Storms.

Nonetheless, Archons are not without use. They can eradicate clumped units with their heavy splash damage, and as hovering units they can, with the help of an Observer, safely clear Spider Mines, which ignore hovering units.

Archons counter to Zealot heavy armies; splash damage decimates clumped Zealots. Psi Storms remain lethal in the midst of battle, so it is ill-advised to merge all available High Templar.