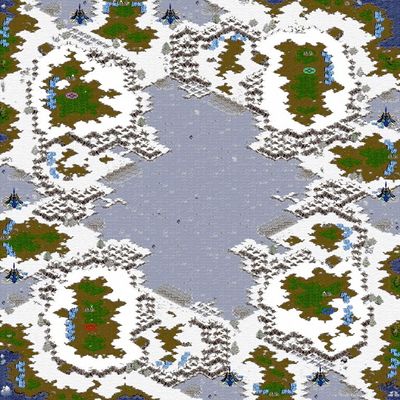 Avalon (아발론) was released in December 2014 to be introduced in the HungryApp Starz League with Kongdoo, alongside the map Demian.[1][2]

Although Avalon's configuration of bases and wide use of ramps does not quite resemble any of the commonly played maps, its four starting positions in the four corners surrounded by expansion sites with a large flat center area will be familiar to most players.

Notable features include a perimeter of interconnected expansion sites, only separated by a series of the Xel'Naga Temples (5000 HP), including a mineral-only third located behind the main base. These temples are reminiscent of those in Neo Electric Circuit, a commonly-played map in the current era, where temples also serve to impeded movement through a ramp of a potential expansion site. Even without destroying the temples, these nested expansion sites are sufficiently vulnerable to attack as they are quite open to the center battleground, with only a ramp choke point slowing down opponents and reinforcements.

The expansion sites located behind each main base is reminiscent of maps such as Gorky Island, where these expansion are somewhat secluded from land attack, but readily open to air and drop attacks. Furthermore, reinforcements will likely be delayed as unit rally points will likely be near the natural expansion, which is located relatively far from this mineral only expansion. Notably, the presence of such bases behind the main causes these main bases to feature substantial space behind the mineral lines which, while enable air attack or drop harass, also provide much land for anti-air defense structures.

Interestingly, the map features a large number of ramps, thus constricting ground troops in many instances (although it should be noted that ice terrain, making up the centre and part of the side paths of the map, is considered by BW to have the same low ground elvation as the surrounding dirt/snow terrain ; therefore ice ramps lack the vision and hit chance impairing characteristics normally associated with ramps).