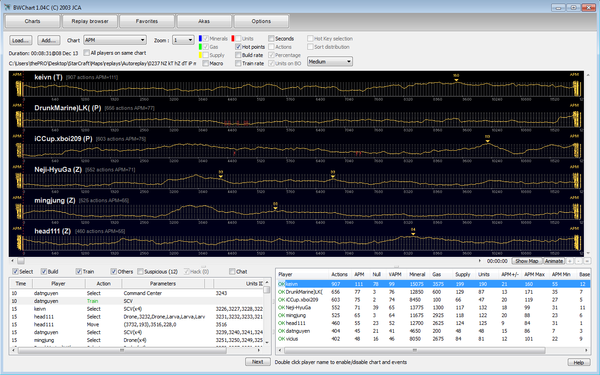 BWChart is a replay analysis tool created by JCA. It is the most popular and was widely considered the best of all software of its type. It calculates APM, plots various charts, can be used to organize replays and offers more functions.

BWChart was a long time the leading tool to spot various forms of Hacks. The methods changed over time, as the developers of hacks changed their function. Outdated hacks can still be spotted.

Mutlicommand hacks allow a player to bind macro schemes on a short cut. When this short cut is pressed, a list of commands is executed faster than possible for a human. These kind of hacks are easily spotted with the help of the APM plots. Usually, the APM sky rockets and exceeds often times more than 1.000 actions per minute. The command list will automatically show a number of actions being performed in the same time stamp.[1] Although the danger of getting a false positive result for Multi Command is very small it exists. If high lags occur during the game, the executed commands are recorded in the same time and could therefore cause similar spikes to the one generated by Multi Command Hacks.

Map Hacks allow a player to reveal the entire map and thus erase the fog of war. This kind of hacks are very hard to spot, especially when the hack is in its latest version. Older versions are still easy to spot with suspicious actions.

In the first years after replays were introduced a lot of map hackers were caught. BWChart has the option to list so-called Suspicious Actions. Everytime a player selects a building or a unit, which he couldn't see if he would not run a map hack, is labelled as these kind of actions. Such illegal/impossible selections could be confirmed by watching the replay carefully and comparing BWChart's finding with the actual vision of a player. Since this was the easiest way to spot a hack, the coders surpressed the recording of such clicks in their later builds.

However, BWChart often times recorded false positive illegal actions. An example would be a selected enemy unit disappearing in the fog of war. Due to the delay of the unit disappearing and the unit still being selected, the replay will contain a false-positive suspicious action. Hence almost all experienced player with a somewhat higher APM will do several suspicious actions in most of their games. Hackers, using the latest versions of the most popular tools, did not. By scanning a bigger number of replays map hackers could be caught by not causing suspicious actions.[2] Again, the danger of wrongly accusing a player does exist. Especially players with a low APM often do not cause these warning, due to their mechanics being relatively bad developed.

With an automine hack enabled, the starting peons are split perfectly to gather unique minerals. In 2006, many leagues, such as BWCL, discovered this. Ten actions are needed to split your workers (Select worker * 4 + Send to mineral block *4 + Select Main Building + Build Worker). Automine hacks made these ten actions in a single frame, most commonly the fifth frame which is less than 1 second, impossible for a human to do. Whenever a replay features these ten highly unusual actions, a player is guilty of auotmining.[3]