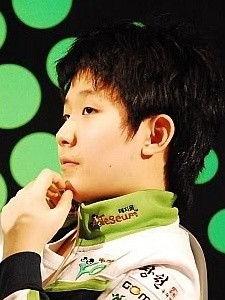 Jun "BaBy" Tae Yang is a StarCraft progamer from South Korea who played Terran for Team 8.

BaBy started off playing StarCraft at a very young age. Before he was 9, he entered the HanbitSoft King of the Star Contest and ended up finishing in second place. The following year, he entered the same contest, finishing 4th. After playing in the Elite School League, BaBy was picked up by WeMade FOX at the tender age of 12 to join their Terran line. Failing to qualify for any of the following OSL or MSL leagues, his first appearance in an Individual league came in the round of 128 of the GOM Classic Season 1. He defeated Robbie 2-0 and moved on to the first Round of 64, where he defeated HoeJJa 2-1. He was eventually knocked out in the second round of 64 by Anytime.

Following his good results in the GOM league, he was played four times in the '08 Proleague season, finishing with 2 wins 2 losses, very promising stats for a new player. With the GOM Classic Season 2, BaBy once again played strongly and made it to the second round of 64, defeating Heng and Soo 2-0, before losing to teammate Mind 1-2. Once again, BaBy appeared in WeMade's Proleague lineup for the '08-09 season. He was played infrequently, finishing the season with 5 wins and 10 losses. However, it was during the GOM Classic Season 3 that BaBy really made a name for himself.

BaBy made it to the Round of 16 in the tournament, with wins over eagle, JangBi and Modesty before losing to Skyhigh. It was his matches against JangBi and Modesty that earned him attention. JangBi was just coming off of his Lost Saga MSL silver and was continuing to show strong play before facing BaBy. Utilising strong drops and strategic play from the start of game one to the end of game three, BaBy took the series 2-1 and drew many comparisons to BoxeR. Against Modesty, BaBy went for a strong aggressive play, peaking in his use of Two Port Wraith in game two. His incredible Wraith micro in those games amazed fans, with relentless harassment culminating in some of the most effective Wraith play in a professional game. This game caused Tasteless to call it "The best TvZ we have seen yet [in the GOM tournaments]"[1].

BaBy has yet to make an impact on the 09-10 Proleague season, finishing the first round 0-3, including an ace match loss to HyuN. In round two he played better, defeating Really and HyuN his two games, bringing his overall record to 2-3.

Born in 1994, he is one of the youngest progamers around.