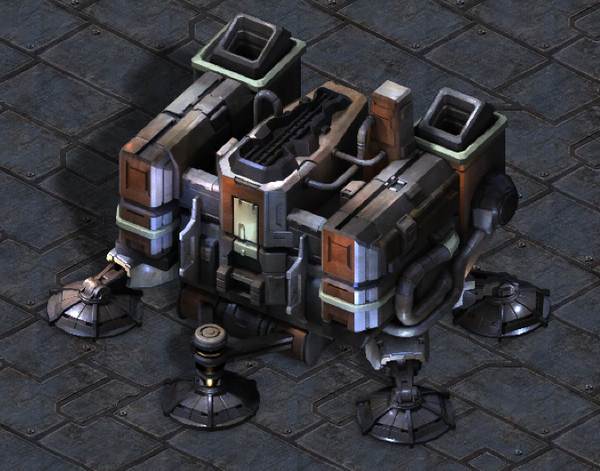 This is about the building. You may be looking for the progamer Barracks.


The Barracks (or Rax for short) is the infantry production building for Terran. As a rule of thumb, when walling, the Barracks should always be placed under the Supply Depot to properly wall.

In a Bionic TvZ opening Terran player will often make many Barracks to increase his unit production capacity.

Barracks are usually built in blocks, like the Protoss Gateways or Terran Factories to make production easier, save space, and provide some protection against Zerg attacks that penetrate the base defenses: Ultralisks cannot pass between those narrow passages, Zerglings can pass only one at a time, and Lurkers must go around if they want to advance.

Sometimes Barracks can be a part of a Proxy strategy like BBS or in other cases, they can be lifted, flown across the wall of the opponent's base, and landed on uncovered part of the base to launch a surprise attack that avoids Zerg defenses.

In a Mech TvZ opening, it is used to wall-in, and otherwise similar to TvP and TvT.

Its most important use is just to unlock the Factory Tech, but some limited Marine production can be seen at the beginning for most openings as means of defense from early attacks.

A Barracks is commonly lifted and used to scout the opponent's base, spot drops or to provide vision for Siege Tanks, as their attack range is greater than their sight range.

Walling with Barracks is not common in TvT because once you lift your Barracks, your opponent can land his Barracks in place of yours and prevent your units from leaving your own base at some crucial moment. Alternatively, you can do the same if your opponent makes a wall-in.

Sometimes Barracks can be used to draw Turret fire, while Dropships fly over unharmed.

The most common use of Barracks is to wall-in (although for some openings, notably, Fake Double, this is not the case,) and later make a Sim-City at your Natural expansion. Rarely though, if the Gas is stolen, players sometimes opt for increased Marine (and maybe Medic) production and build more than one Barracks. The Deep Six build order is also known for this, as it includes six Barracks.

Barracks can be floated over objects to prevent them from being seen or click-able by an opponent. This is usually done to hide Turrets or Mines in TvP. A notable example of this is at Blizzcon 2007, where Iris covered Spider Mines underneath his floating building to prevent Nal_rA's Dragoons from seeing and targeting them.[1]

During early-game play, Barracks are either part of a wall-in, Sim-City, or scouting the edges of the base for drops. Later in the game, they are often seen providing vision for Siege Tanks, scouting flanks or key positions on the map, or landed on an island expansion to prevent the Protoss from expanding there.