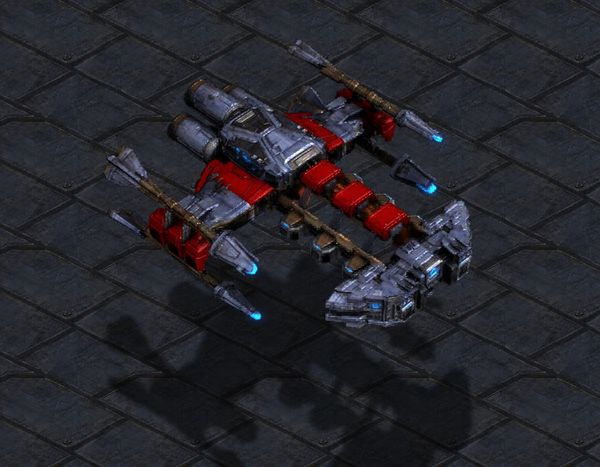 The Battlecruiser (Commonly abbreviated as BC) is one of the strongest air units in the game and perhaps the strongest unit in the Terran arsenal. However, its cost, build time, and high supply requirement (6) makes sure that it is also one of the lesser used units in competitive StarCraft. When Battlecruisers do get used, the Yamato Gun upgrade is very popular due to its extremely high damage. This is especially true in the Terran mirror match up where proper Yamato cloning can mean the difference between a victorious fight and losing all of your high cost BCs.

Note: The Yamato Gun has a greatly longer range than Battlecruisers' regular attack (10 as opposed to 6, respectively), almost as much as siege range (12), allowing you to destroy enemies from a safe distance.

Once rarely used in TvZ, Battlecruisers are seeing a resurgence in the Remastered era. Battlecruisers are capable of harassing Zerg expansions without additional ground support, often alone or in pairs. This can be very annoying to the Zerg player because Zerg typically defend their expansions by defending narrow chokes with static defenses such as Lurkers and Nydus Canals, all of which are useless against Battlecruisers. Since Spore Colonies are rarely built to defend bases, the only effective option for Zerg to kill Battlecruisers is a large group of Scourge. Battlecruisers are much tougher targets than science vessels, because they can kill a Scourge in a single hit, and can absorb up to five scourge hits (seven with Defensive Matrix). As Battlecruisers are grouped together, they become increasingly powerful against Scourge, often forcing the Zerg player to spend more gas than the cost of the Battlecruisers. Their powerful attack and Zerg's general lack of anti-air mean that Battlecruisers are easier for the Terran to use than they are to defend against, forcing the Zerg to multitask and leaving them vulnerable to other attacks. They are often used to focus fire high priority targets such as Nydus Canals, Drones, Defilers, and tech structures. Even if the Scourge manage to kill Battlecruisers with minimal losses, this is not necessarily a bad trade for Terran, because the Zerg player was forced to spend gas on Scourge instead of other important gas-heavy units (Defilers, Lurkers or Ultralisks). If a Battlecruiser tech switch is scouted, Spore Colonies at each base are an effective means of countering them. Their ability to kill Scourge in one hit and the large damage the Yamato Gun causes to Ultralisks makes them somewhat useful as a core component of the army, but the Terran rarely has enough Gas in late game TvZ to spare for Battlecruiser upgrades. When Battlecruisers are used it is often in a mid-late game where the Terran player uses mass Marines, Medics and Science Vessels. Adding a Battlecruiser or two to this army composition provides a good protection for Science Vessels from Scourge, but the use of Battlecruisers for this purpose is somewhat redundant as Marines also destroy Scourge very quickly.

TvT is the match-up where Battlecruisers are used most often. This is because the games tend to last long enough for players to be able to afford them and because of the Battlecruiser's ability to break tank lines. These long TvT games are often decided by large Battlecruiser vs Battlecruiser battles, the outcome of which usually depends on the players' ability to clone the Yamato Gun, or sometimes a single EMP Shockwave. When using BCs in TvT it is very important to engage with the Yamato advantage or you may lose even with superior numbers. As Goliaths are needed to effectively fight them, Battlecruisers tend to be paired with Siege Tanks, thus diminishing the effectiveness of the Goliaths as a countermeasure. Another possible counter is mass wraiths, but an insufficient number will be defeated by a sizable Battlecruiser fleet. In some cases, however, cloaked wraiths can take advantage of a lack of scans or simply overwhelm Battlecruisers with sheer numbers. A curious thing to consider here is that, a fleet made up of Battlecruisers and Wraiths, where the ratio between the two units is roughly equal in terms of supply volume, will actually tend to do better against a fleet consisting entirely of either of the two.

Very rarely used, mostly because the Arbiter's Stasis Field and the High Templar's Psionic Storm abilities can render a whole fleet of Battlecruisers useless and even completely destroyed in a matter of seconds, since they clump up and move slowly. Dragoons, the backbone of the Protoss army in PvT, can fight cost efficiently as well.

If they are produced, which is unlikely since they are so expensive and considered weak, at least against Terran, Scouts and Dark Archons can counter for supply fairly well if they can be gotten sneakily. The Dark Archon can use Mind Control, and to a lesser extent, Feedback, to counter a Battlecruiser fleet.

With such decisive counters available for the Protoss, the Battlecruiser is regarded as largely ineffective in the TvP match-up.

The Yamato cannon however allows it to be extremely strong against massive units allowing it to sometimes being used to counter Carriers on island maps, when High Templar cannot be fielded or have not had the foresight to be fielded, such as when the Carriers are sieging.