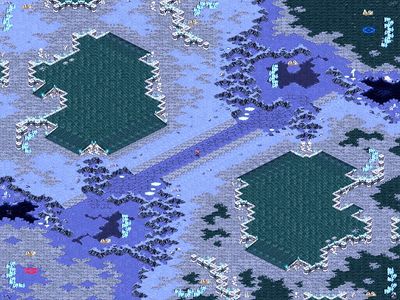 The direct path between bases allows for early aggression in the early game, as well as a quick scout. The path is quickly abandoned in favor of the main path in the middle game due to the size limitation. The mineral only is close to the Natural Expansion which lets a Zerg take a quick third fairly comfortably against a Protoss FE build.

The ravine in the middle along with the high basilica is very important for positioning. Each side usually takes one side of the ravine and reinforces that line constantly. If the opposing side can reach the basilica, then they will have the high ground advantage pushing into both the third Expansion and the Natural.

Blue Storm was introduced into progaming in September 2007 during the GomTV MSL Season 3. It rose to be one of the more popular maps after hosting numerous epic games including Bisu vs Flash. With Zerg defeating Terran 12 times in the first 15 matches, it was quickly labeled a Zerg map. To remedy this, a second version of the map was created, modifying the Natural so that it was easier to defend from Mutalisk harass. Blue Storm has been used in all three major tournaments in Korea — Starleague, MSL, and Proleague, and awarded at 3rd Annual KeSPA Awards as the Best Map of 2007 Season.

Blue Storm was one of the four maps used in the 2008 Razer TSL.

The statistics compiled from the YGosu.Com DB.