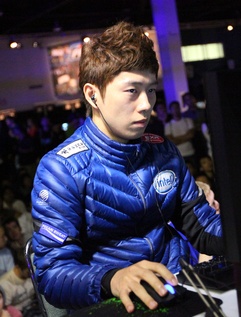 Lim "BoxeR" Yo Hwan is a StarCraft progamer from South Korea who played Terran for SK Telecom T1. BoxeR is famous for his micro control and innovation, and is one of the most recognizable progamers in the history of progaming.

He played Terran and was the head coach for SK Telecom T1 in StarCraft II.

As the most popular StarCraft player with a fan club of more than 600,000 members and a DVD compilation of his greatest games released in South Korea, he is widely regarded in e-Sports as an iconic figure. Because of his long dominance during the rise of StarCraft’s popularity in South Korea Lim earned the title of The Emperor within the StarCraft community.

Boxer first came to fame by dominating professional StarCraft while choosing to use the Terran race over Protoss at a time when this was seen as a relatively weak choice in comparison to the other two StarCraft races. His first major win was the Hanbitsoft OSL, a great victory for the Terran race and Boxer himself, as there were no Terrans at all the previous OSL. His near-undefeated run through the whole Starleague (with only one loss to Kingdom in the semifinals) would start a new era of progaming.

Lim Yo Hwan is a two time Starleague champion, KPGA Tour champion, two time WCG champion, and also the former captain of SK Telecom T1, a team that was originally built around him with players he hand-picked. After his loss to Reach in the SKY 2002 OSL, his father disputed with the team he was currently in, IS (now Lecaf), and Boxer was forced to make Orion (now SKT T1), initially containing talents such as Sigamari, IntoTheRainbow and the monster Terran, iloveoov. Boxer took iloveoov under his wing and he eventually became a two time OSL and three time MSL champion. His team has consistently been one of the most successful in the team leagues.

BoxeR, along with GARIMTO and YellOw, have been said by many fans as the progamers who revolutionized early progaming strategy, with such strategies as the Tank Drop and the Double Barrack Cheese. During this early time in his career he innovated heavily, making much more effective use of the Terran Dropship unit than had been achieved in the past. BoxeR also gained a reputation for being able to turn around matches against the odds and having excellent Micromanagement skills. In contrast, his weakness is thought to be his macro management, at least when compared to other top-level professional StarCraft players.[1]

Although no longer as strong of a player as during his prime, he ranked 11th in the April 2006 Korea e-Sports Association (KeSPA) rankings, and made it to the final of the EVER OSL 2004, only to lose 2-3 to his team member iloveoov, as well as the final of the So1 OSL 2005, again losing 2-3 to AnyTime. In August 2006 Lim announced at the MSL group draws that he had received his draft letter from the government, and would be entering the Air Force by the end of the year. He later said he would try his best to return after his 2 and a half years of service.

After Lim joined the Air Force he started putting his fame into work, after a month and a half an army progaming team was created, and BoxeR found some retired progamers who joined the army before him, including H.O.T-Forever, Clon, ChRh, fOru, Rage, Qoo)Sunny and MuMyung. Together they formed the first army progaming team ever. After 2 months the team was announced, ACE (Airforce Challenge E-sports) was official, Air Force ACE. ACE’s first team league was the Shinhan Bank Proleague 2007 and has played in every Proleague since.

In December 2008, when his mandatory military service ended, Boxer returned to his team SK Telecom T1 and was on the A-team roster. However, he saw little play time, and in 2010, Boxer did not renew his progaming license. Instead, he began to play StarCraft 2.