"A software bug is the common term used to describe an error, flaw, mistake, failure, or fault in a computer program or system that produces an incorrect or unexpected result, or causes it to behave in unintended ways." - Wikipedia.org[1]

Brood War was full of bugs and still has many in its code. Blizzard reacted to the most important ones and fixed plenty of them in their patches. A full log of changes and the history can be seen in the Patchnotes. Some of the bugs were included into the Metagame,some of them are used to create maps with special features, like Fortress - others are strictly prohibited and banned from many leagues. A list of illegal bugs can in the Competitive Rules article.

The standard battle.net like USEast, USWest, Europe and so on feature special bugs. Those are not restricted on Brood War's battle.net but often show in other games as well. Some of the bugs do not occur in unofficial servers like ICCup's the Abyss, Brain-Clan or Fish-Server.

When viewing a players profile (double click on name) the MacOS version viewed a bugged date.

With the introduction of Patch 1.09 Battle.net had a bugged welcome-greeting when logging onto the servers. 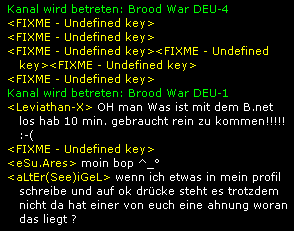 When a player disced in pre-1.09b Patches and connected again shortly after a #2 tag was added to his nickname. He couldn't create a game with the same name he just disced from and could have conversation with himself; he would get the same answer he just whispered.

Ladder maps in open Battle.net needed to have official Blizzard maps. Therefore a filter checked the correct version. However some maps slipped through that filter with 1.09 Patch' introduction.

When the /r command was introduced in Patch 1.16 a whisper that started with /w Rxxx answered the last person to whisper the user. This occurred for every target-whisper user that had a nickname starting with the letter R or having it on the second space. This caused a player using that command accidentally when actually typing in the "/friends whisper(message) text" command. The Patch 1.16.1 fixed this issue.

A lot of graphical bugs occur in battle.net and PVPGN based servers.

Users logged in with a stealth bot had a special symbol behind their name. The stars or the ladder ranking disappeared.

Battle.net hosted one server for many games: Diablo I & II, Warcraft II & III & TFT and StarCraft and SCBW. In SCBW battle.net Warcraft 3 users had the add-on @northrend (for Europe) to their nicknames. This was too long for the ordinary interface, thus the stars/ladder ranking disappeared.

When Alt-Tabbing in pre-Vista area the advertising banners' colours often got inverted along with other elements of the menu.

Under Windows Vista and above the graphic elements are usually inverted. Furthermore especially Windows 7 caused a lot of graphics bugs while playing, eventually leading to crashes. A guide to fix this situation can be found in the Broodwar Forum. Also Blizzard offers a small Patch.

When a game was paused a player that had a unit still selected could give orders in Patch 1.09. If those commands got spammed multiple times the replay couldn't be saved; additionally while trying to save the game the engine crashed.

Replays saved with older engines can't be watched. Usually the games stop to work whenever a Zerg player starts to harvest gas. The units are still trained, but money keeps piling up and no other buildings are built. Older replays can only be watched via down-patching or with starting StarCraft via old executables. Sometimes non-Zerg replays can still be watched bug-free.

The version of a replay can usually be determined by using BWChart Replay Analyzing tool.

Even with old executables a replay can be screwed up when a third party software was used to play, such as Penguin Plug. In that case the version of the tool has to be started additionally.

With the introduction of recorded chat in replays a replay could get bugged whenever the game was paused and the players wrote more than four to six sentences before the game got un-paused. The most launchers from unofficial servers (ICCup Launcher, Mini Launcher, Chaos Launcher) offer a tool called "replay fix" as work-around.

Until Patch 1.11 the replay speed Fastest*16 was the same as Fastest*4, so the replay actually slowed down after Fastest*4. The *16 options also had a delay until it kicked in.

Game Bugs are often connected to one another; some bugs got fixed and the fixes opened the doors for other bugs.

Protoss Players could build a Nexus very close to minerals/gas. For that a probe had to be blinded by an optical flare. The probe's vision range was limited along with the standard forbidden space between minerals and Nexus. The same trick worked on Drones and SCVs in a similar way; the only difference was that SCVs/Drones could only leap one hex-field between building and resources. 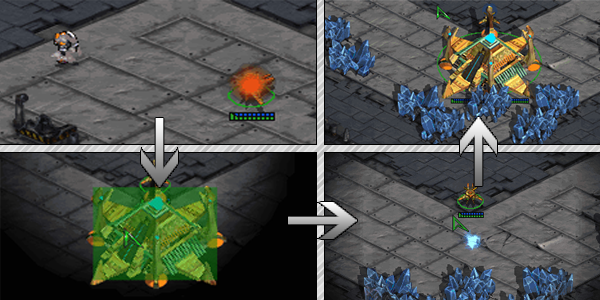 A Terran could slide his Command Center next to resources by pressing Shift+giving move commands to the place he wanted it to be while the Command Center was landing. 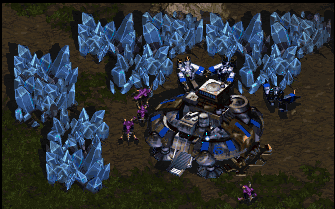 Terran could stack his buildings via abusing the lift function in Pre-1.10 Patches. Whenever a building was lifted and given an order to build a unit/research an upgrade immediately after the first command the building seemed to actually produce something. In this state the building could be float to any direction (over land). If the order got canceled the building would land anywhere ignoring the standard conditions. If the command was canceled while landing the building got stuck in the position it had but still seemed to float. 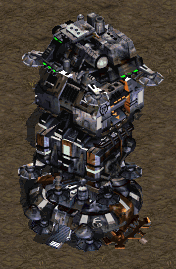 When a tank was sieged in between harvesting workers it exploded.

When a Zerg Drone was mind controlled and burrowed the moment it entered the cloaking-range of an Arbiter the worker remained invisible for the entire time. If the worker was used to build facilities those were cloaked, too. 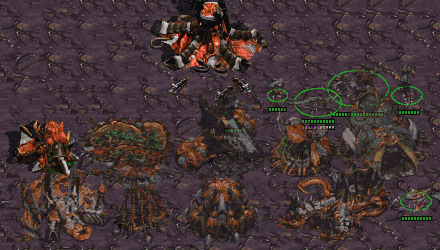 This is one of the examples of bugs influencing the way the game is played. A worker send to mine a mineral block in vision of any kind of unit will simply move through any obstacle, such as blocking buildings and units. In Pimpest Plays 2002 this move was used to break a defensive structure. If a moving stack of workers gets a stop/attack/hold command they will un-stack immediately and push surrounding units away. This kind of maneuver is allowed in most leagues for defensive purposes, like SCVs pushing away stasised units from ramps, or to block incoming army masses in 2on2. It is strictly prohibited for offensive measures.

An alternative is the SCV Stack, also prohibited in all leagues and ladders. With a combination of move, patrol and gather commands a Terran can stack up to twelve SCVs permanently and move them around. Even with an attack command those workers will not un-stack. In addition workers can only remain stacked when traveling between minerals; with this however it's not the case.

In any match up, a player can glitch a unit through minerals through various methods:

When a turret is being built a Protoss can move his observer directly over the turret. When the turret is finished it will not shoot at the observer but reveal it for other Terran units. It also stops rotating. The Terran can solve this problem by spamming the stop command on the turret; this needs a tough timing however, as the turret does not react every time to this. If the observer moves (due to fire) the turret will work again. The turret will also shoot on any other unit entering its radius; Terran could also attack one of his own buildings/units with a turret to solve the situation.

In Pre-Patch 1.10 games a player could make his drones fly over any area including cliffs and water. When a drone had the command to build an extractor and got shift-moved to another spot it would fly whenever a) another drone was already build and extractor shortly before the soon-to-be-flying drone reached the gas and started to build and extractor or b) not enough minerals were available to execute the order. 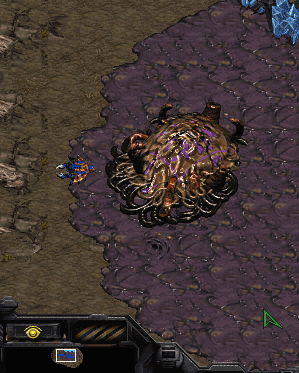 A new version after Patch 1.10 was discovered: when a drone was surrounded and couldn't move, a player could give it orders to build a structure somewhere else. The drone started to move and their shadow "jumped" away. The drone could not move up cliffs or over water, but down cliffs.

When two templars (high or dark templars) were given the order to merge a player could give them the order to stop with a shift-move command to another spot on the map. If the timing was correct the templars ignored any obstacles and could walk on cliffs and over water. It got fixed with Patch 1.10.

When Patch 1.13 was introduced the ability to train Infested Terrans disappeared from the menu, causing a lot of uproar in the community.[2]

To fix the flying Drone bug Patch 1.10 did not allow players to give workers with a building command any other commands. If a player tried to do this anyway the drone would spin around and their shadow would darken. The building would not be built and the drone would idle at the spot it usually should build.

A drone could build a rock. If a player used the burrow command when a drone was about to morph into a structure while viewing another spot on the map (if he would watch the drone burrow the game would crash = Burrow Crash Bug) a rock graphic appeared instead of the building. The drone disappeared. Other units could move under the rock or even buildings could be constructed on top of it. 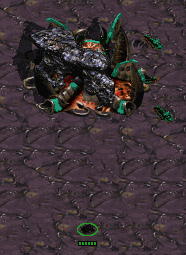 Lurkers can be hindered from attacking permanently. This can be done with two different ways: the lurkers are ordered to attack a structure under the fog of war or get a hold position command when grouped with an overlord. Even if units come into range the lurkers will not attack.

This trick was long time forbidden, but was allowed again since a player could also spam the "stop" command for the same result.

This bug occurs most often with dragoons but also appears from time to time with any non-air range unit. When a player tries to move and shoot micro and spams too much commands the units will stop and wont react to any other orders until given the "stop" command.

When a Terran landed one of his structures on passing units they exploded. This worked especially on tanks moving in the landing area and sieging shortly before the structure finished the move.

The fix created another kind of glitch, similar to the mineral walk. When a building lands on top of units the units get pushed away from it enabling units to pass over mineral lines. This trick was used by NaDa at BlizzCon 2005 against Yellow and gained him a spot in Pimpest Plays 2005.

Whenever an SCV built near cliffs the SCV could be pushed down or up a cliff when it was ordered to stop to build.

In Pre 1.12 Patches Pylons could be finished but didn't develop a Psi-Radius around it. This often occurred when they pylon was selected to often shortly before finishing and lead to multiple losses for the harmed player. In many leagues this caused a lot of fights over whether a game had to repeated or not.

In Zerg vs. Protoss, if a Plague is cast on Interceptors, they will return to the carrier because the AI will believe that they need to be healed. Since the interceptors are constantly being damaged by plague for the duration of the spell, the interceptors that have been hit by plague will not come out of the carrier until they heal, some time after the spell dissipates.

In the German version of StarCraft the hotkey for rally and train Vessel are the same.