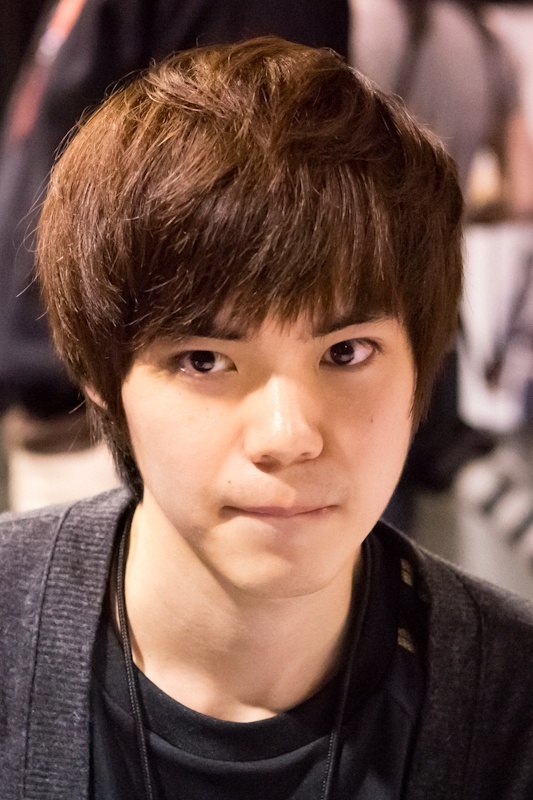 He played Zerg in StarCraft II for STX SouL before retiring.

Calm has been a steady Zerg player for STX SouL since 2005, making his first 1v1 appearance in the SKY2005 Proleague Round 2. He spent the majority of his early career playing a mix of 1v1s and 2v2s on STX's Proleague lineup, being the primary Zerg player on the 2v2 team, typically being paired up with SoO, Hwasin, or BestGod. In his early career, Calm displayed very poor results in individual leagues, with the Arena MSL being the 1st Starleague that he qualified for (two and a half years after he became a progamer), where he dropped out in his Ro32 group.

After the Shinhan Proleague 2008 season, 2v2 was dropped from all competitive StarCraft. This left many previous 2v2 specialists (such as SoO, 910, Clon, and many others) in a lot of trouble as they were unable to keep up with strong 1v1 opponents. Fortunately for Calm, he easily adapted to the 1v1 environment, and quickly became one of STX's leading players in the SPL 08-09 season. Calm appeared on STX's lineup almost every match and combined with teammate Kal made up the vast majority of STX's ace match appearances. Calm took an early lead in the SPL 08-09 season, and in round 1 he was one of the leading players of the whole league stats-wise. In round 2 however, Calm became much less dominate and also failed once again to qualify for any leagues. In Winner's League he also displayed poor results at first, but towards the end became much more improved, with a 3-kill versus eSTRO, and an all-kill versus Samsung KHAN. In rounds 4 and 5 of the season Calm seemed to of have retaken his form from round 1, having impressive results and helping his team go 10-1 in the 5th round, which was the best record of any team for any round, which brought STX to finish in 3rd place for the entire season. Calm finished the SPL 08-09 season with 41 wins and 20 loses, or a 65.6% winning ratio, which was the 5th best record in the league.

Calm finally qualified for another Starleague after almost a year of not doing so when he qualified for the Avalon MSL. He made a clean sweep of his Ro32 group by defeating Sea with a strategic play that involved 2 Hatch Lurkers and a fast, 2-gas Defiler rush. He then defeated ZerO in the winner's match with some tricky play by hiding Zerglings from ZerO's scouting Overlord, giving ZerO a false sense of confidence to expand, and was soon overrun with more Zerglings than he thought Calm had. In the Ro16 Calm faced fOrGG. Calm managed to play very smartly versus ForGG, and defending a strong cheese from him on Heartbreak Ridge and then out maneuvered him and outsmarted his mech play on Outsider, winning the series 2-0.

Meanwhile STX was playing Samsung KHAN in the first round of the playoffs. Although STX was strongly favored vs KHAN at the time, KHAN played uncharacteristically well during the time, and pushed STX to an ace match in the 1st series, where Great was able to outsmart Calm by hiding many of his Mutalisks to a scouting Zergling (and also out-micro'd Calm during the ensuing battle), which gave KHAN the win on day one. On the 2nd day of the Playoffs STX played much better, and defeated KHAN 4-1, bringing the entire series down to one Super Ace Match, with the winner's team advancing. Calm, being the strongest player on the team at time, was chosen as STX's Ace player, whereas KHAN chose their most well-rounded player JangBi. In the game JangBi went for a somewhat old-school strategy by going for a fast, +1 Speed-Zealot rush which Calm did not scout in time, which hit at such a timing as that Calm did not have adequate defenses at all, and lost the game. Calm said in interviews shortly afterward that his failure in 2 ace matches during the playoffs lead him to lose sleep at night.

Soon after STX was eliminated from the Playoffs, Calm was to face EffOrt in the Ro8 of the Avalon MSL. Many considered these two Zerg players to be competing for the spot of "number two Zerg," with Jaedong still being the undisputed number one Zerg player in the world. EffOrt was the huge favorite to win, with ZvZ being his most successful match-up, ZvZ being Calm's weakest match-up, and coming off of a recent 2-0 victory over Jaedong himself in the Ro8 of the GSL S3. Surprising many, Calm defeated EffOrt 3-0, with the last two wins being direct build-order counters (9-pool to 12-hatch), which many contribute to Calm's ability to read that EffOrt was going to 12-hatch in both games (although it is still disputed). In the semifinals, Calm was to face none other than Jaedong, who is known for being nigh-untouchable in ZvZ; with a career winning ratio of over 78% in the match-up at the time, and who has only lost one Bo5 in his entire career. Calm once again shocked the entire StarCraft community by defeating Jaedong 3-1, displaying excellent micro and incredible mind-games and tricks (including hiding Zerglings from Jaedong's Overlords and getting +1 attack researched for his Mutalisks). It is worth noting however that Jaedong had two other leagues to practice for at the time - Proleague finals and the OSL semifinals - while Calm was able to focus solely on this one series. Nevertheless, Calm became the 1st Zerg to ever defeat Jaedong in a Bo5, the 3rd player on STX to ever reach a Starleague final, and the 2nd player ever who had spent his career on STX to reach a final (the other being Kal).

In the finals Calm faced off against CJ Zerg and EffOrt's teammate Kwanro, who had recently upset his teammate Iris to reach the final. The final was one of the least hyped finals in Starleague history, being the least popular match-up (Zerg vs Zerg) and 2 players who had little star-power compared to the likes of Bisu, Flash, or Jaedong. The finals proved to be entertaining though, and also one of the most exciting and entertaining ZvZ series of all-time. Calm came out on top, winning 3-1, and becoming the 1st player from STX to win a Starleague (July also won a Starleague while on STX, but spent the majority of his career on other teams and was only on STX for a few months beforehand). Over the course of the Avalon MSL Calm was given the nickname "Brain Zerg" for his strategic play and excellent decision-making.

Statistically Calm best match-up now is vs Zerg, although recently he has gone on a large winning streak vs Terran and has also had good results vs Protoss. Calm has garnered a lot of fans in the recent season by showing well-executed special builds vs many opponents. Along with his teammate July he has been known for making use of the 2 Hatch Lurker opening vs Terran recently. Calm is still somewhat known for being an early-game player who strives to win in the early-game, but over the last year has shown excellent mid-game play (specifically vs Terran) and vastly improved late-game (specifically vs Protoss).

In November 2009 Calm entered a small losing streak, going 0-2 in his MSL group (and thus dropping out of the 2009 Nate MSL in the Round of 32). Despite a slow start to the 09-10 Proleague season, Calm finished round 1 with 7 wins and 4 losses, which included two ace match defeats. Still in the 2009 EVER OSL, Calm finished his group 2-1, with victories over Shine and EffOrt and a defeat to Fantasy. Calm played Pure in the round of 8. At the time of the match, they have played each other 5 times, with Calm leading 4-1. The series started with Pure Cannon rushing Calm's third Hatchery on Eye of the Storm. Despite losing the Hatch, Calm seemed unphased and played a 2-Hatch Mutalisk build. Pure was completely unprepared for Mutalisks and GG'd shortly after the harass started. In game two on El Niño Calm went for a low-econ fast 2-hatch Muta build and took out Pure 2-0. His qualification will set him up against Flash in a Best of 5 in the Round of 4. At the time of the match Calm had played Flash twice in two proleague matches in 2007 and the 08-09 season. Winning both, he holds a 2-0 record against the Terran.

Ever OSL Semi-final with Flash[edit]

Calm's first foray in an OSL semi-final ended with a 3-1 defeat at the hands of Flash. Calm opened the series with 2-hatch all-in Mutalisks on El Niño. He did some effective harassment, killing a large number of SCVs but Flash defended with good turret placement and strong Marine micro. Calm eventually transitioned to Lurkers but a Marine force sniped the early morphs and shortly after, Flash pushed out with a large force of Marines, Tanks and Vessels and forced the GG. On New Heartbreak Ridge, Calm used a hidden early 3rd base to strengthen his early Mutalisk attacks and with good micro and pinpoint timing, Calm used the Muta to kill Marines, Turrets and SCVs and eventually left Flash with nothing to do but GG and force the series to tie. Game three on Fighting Spirit was the fan-favourite of the series. Both players went for the same 2-Hatch Muta and 1-Rax expansion builds as in the previous games. Calm's Muta seemed likely to arrive before turrets, but flash used a group of MnM to push out. He caught the Muta as they left their base and picked off several, buying him time for Turrets. As the game progressed, Calm used Guardians to take out Flash's natural. Calm attempted to use Scourge to protect the guards from Wraiths, but Flash intercepted them en route and killed all the Guardians with Wraiths. As the game progressed, Defilers and Ultralisks appeared as expansions went up. Flash swapped to almost pure Tank and began to defend while using Science Vessels to snipe Defilers and weaken Ultras. Flash repeatedly denied Calm any more expansions while defending a few drops. Calm tried to break the tankline occasionally but with no success, even with Plague and Dark Swarm. Eventually, Calm lost nearly all of his units in a large battle and had to GG shortly after. The final game took place on Eye of the Storm and saw the same openings as the last three games. However, Flash use his large timing push with Marines, Tanks and Vessels and caught Calm completely off guard and destroyed all of his attacking units. Calm had nothing to defend with and had no choice but to GG in a quick, decisive win for the Terran and an elimination for Calm.

Following his 7-4 results of round one, Calm, alongside Kal, lead STX to the top of the round 2 tables with his 9-4 record going 1-1 in Ace matches with a victory over ZerO. This strong showing puts him near the top of the most wins list with a 16-8 record going into Winner's league.