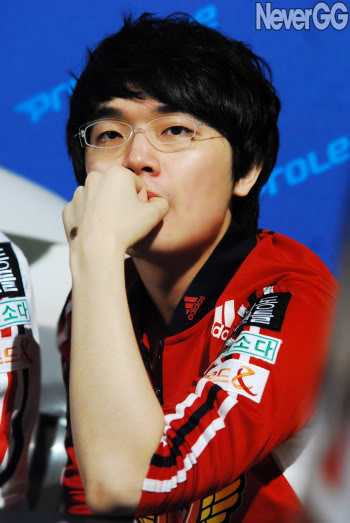 Ko "Canata" In Kyu is a StarCraft progamer from South Korea who played Terran for Air Force ACE.

He played Terran in StarCraft II for Air Force ACE and currently is a caster for SPOTV Games.

Canata's first recorded game was a match in the 2003 iTV Rivals League against Grrrr... which he lost. He was entered into the 04 Spring MST and the 04 OCL prelims. He almost passed the MST but was defeated by Sync in the final game. He qualified for the OCL, but was knocked out by Clon. During this time he also qualified for the 04 iTV Newcomers League. He went all the way in the tournament and won gold in the finals by defeating YellOw(ArnC) 3-2 in the finals.

His first proleague appearance came in the SKY2005 ProLeague R1 where he lost his only individual game to Saint. He continued to do well in MSL and OSL prelims, but did not pass either during this time. He was entered into the 2006 OnGameNet Super Rookie Tournament shortly later. He made a strong run, defeating Jaedong in the quarterfinals before being knocked into the 3rd place match-up by, eventual winner, Light. He then defeated Darkelf to earn a bronze medal.

With this strong result, he began to be fielded for SKT T1 in the SKY2006 ProLeague R1. His strong play left him to finish with a 5-1 record, one of the strongest in the round. He also qualified for his first major individual league, the 2006 2nd Shinhan Bank OnGameNet StarLeague. Despite his strong proleague results he was knocked out of his group 0-3 after losing to Sea, Rock and Jju. In the SKY2006 ProLeague R2, Canata failed to make a repeat performance of his round 1 stats, and finished 1-3, leaving him with overall stats of 6-4 for the season. He was played in the Grand Final of the SKY2006 proleague where he won his game against Sea. Despite his victory, SKT T1 would lose the finals. He made the MSL Survivor stage for the first time in for the MBC Survivor 9th, and finished with no losses to make the GOMTV MSL S1. Despite blitzing through the survivor stages, he was knocked out 1-2 after losing to Bisu and Nal_ra.

Canata made the following GOMTV MSL S2 but was knocked out 0-2 in his group losing to Nal_ra and Firebathero. Despite being knocked out of the MSL in the first round for the second time in a row, Canata performed strongly in the Shinhan Proleague 07 Round 1 and finished with 9-5 stats. In round 2, he finished with stats of 3 wins and 5 losses. For the 3rd time in a row, Canata made an MSL, the GOMTV MSL S3 and for the first time, he made it past the Round of 32, qualifying second in his group with 2 wins and 1 loss. He faced XellOs in the Round of 16. Despite winning the first game, Canata lost the series 1-2.

In 2008 he again qualified for the GOMTV MSL S4 where he was once again knocked out 1-2 in the round of 32. He continued to play fot SKT's proleague team in the Shinhan 08 Proleague and finished the season 8-4 with a 8-1 record in TvT. He made the following three MSLs, Arena MSL, Clubday MSL and Lost Saga MSL. He qualified first from his round of 32 group before being knocked out 1-2 in the round of 16 by Kal in the Arena MSL but was knocked out 0-2 in the group stages of the ClubDay MSL. In the Lost Saga MSL he was knocked out of his all Terran group with NaDa, Leta and Ruby after losing to NaDa and Leta.

Canata started the 08-09 Proleague season slowly, finishing the season with 7-9 stats before the Finals. In the break between the regular season ending and the 08-09 Grand Finals, SKT T1 and Canata enjoyed a break from proleague duties, due to finishing first in the table. During this time Canata started to enjoy a peak in his play. He made his first OSL since 2006 after flawlessly passing his prelims to make the 2009 Bacchus OSL and he made his 8th consecutive MSL with the Avalon MSL. He made a strong run in both leagues, reaching the round of 8 in the OSL and MSL.

In his OSL run, he defeated Hogil and Upmagic to pass his Round of 36 group before meeting Kwanro, by.hero and Leta in his Round of 16 group. Canata dispatched the two zergs and qualified 2-1 alongside Leta to meet Fantasy in the round of 8. His team-mate was a strong favourite, not only in the match but also, to win the whole tournament after his run in the previous OSL. Fantasy defeated Canata 2-0 and made it to the finals before losing to Jaedong. Canata's strong performance in the OSL was mirrored by his MSL run. He qualified second in his Round of 32 group behind Flash before convincingly defeating Piano in the Round of 16. His seeding was unlucky again, facing Jaedong in the round of 8. Jaedong, like fantasy was a strong favourite to win this game, but Canata made him work for it. Playing spectacular TvZ, Canata took Jaedong to 5 games before being knocked out. Canata's powerful performance is seen by many as the best StarCraft he has played.

Returning to the Proleague Grand Finals, Canata was set to play in both days. On the first day he contributed to SKT's 4-0 drubbing of Hwaseung OZ by defeating Lomo. On the second day, he played BackHo, a game that he unexpectedly lost. Despite this, Fantasy cleaned house and won the Finals for SKT T1 in the second day's Ace match.

Canata's games against team-mate BeSt were all close affairs. Starting with a long game on Ultimatum, Best used carriers against Canata to force an eventual base swap. Canata took the 11 o'clock base and started to turtle. Using large goliath and tank numbers to defend, Canata teched to nukes and started sending ghosts out to attack BeSt. Despite some successful attacks, including catch some carriers, BeSt had too big an advantage and Canata was forced to gg. In their second encounter on Odd-Eye Canata once again nuked BeSt, but was overpowered. He lost the series 0-2 and was knocked out of the MSL.

In the early rounds of the 09-10 proleague Canata showed average performances, finishing round one 1-1 and round two 3-3 leaving him 4-4 overall.