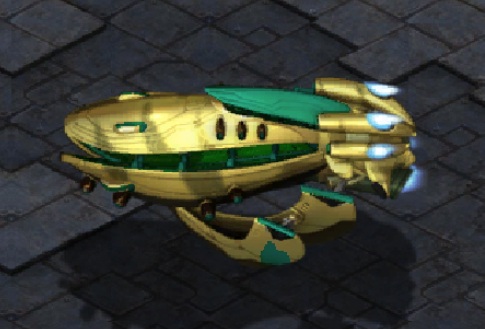 Carriers are a late-game Protoss air unit that are the largest and most costly unit available for Protoss. Carriers are produced from the Stargate and requires a pre-existing Fleet Beacon. Carriers have the highest armor, health, and shields of the Protoss race. Their main advantages are their long range and mobility in combat; this potentially incredibly long range is especially notable as unique among Protoss units. On the other hand, their raw attack power is rather low for their price. Perhaps their greatest use is in extreme late-game where their supply efficiency for their staying power is usable, much like Battlecruisers; however, they are hard-countered by the latter since they make volleys of low-damage attacks and due to the Yamato Gun.

Carriers themselves do not, in fact, possess any attack, but like Reavers build and transport unique units -Interceptors in this case- to much the same effect. A Carrier does not come equipped with any Interceptors when first warped in, so it must construct them individually, adding quite a deal of cost and build time to the finished unit. Unlike the Reaver's Scarabs, however, the units it builds do not immediately sacrifice themselves to attack but attack as would another unit stacking up on a target that it "fires" at until recalled at which point they may still be used again. While targetable, expensive and fairly weak individually Interceptors move quickly around targets, potentially out of range, and can recharge shields instantly upon being recalled meaning they can overwhelm targeted forces (although potentially very, very slowly). Interceptors are all destroyed if the Carrier itself is destroyed. While they are only deployable at 8 range, Interceptors still attack up until when the Carrier is at 12 range, making Carriers the longest ranged Protoss units in the game.

This means that Carriers are more often than not used in builds that stack them so that their Interceptors cannot be individually sniped while they keep up attack pressure. While Carriers have range notable for Protoss units they are not long ranged units compared to the other units in the game, particularly Goliaths, and Hydralisks can quickly intercept them, meaning Carriers were relatively rare in competitive play until the Bisu Corsair contain builds were popularised, and even then are not considered particularly useful without large stacks on most maps. Even a relatively small complement of Goliaths can kite a good number of Carriers to great effect easily and outdamage them. They do have a niche however, especially at impeding terrain. Much like a Guardian, use of terrain as a flying unit can be used to control enemy movement.

It is always better to get the +1 attack upgrade first for Carriers because each Carrier will do one extra damage for each Interceptor it has.

Due to the massive range of Interceptors, Carriers are useful for harassing opponents from a distance. Skilled Protoss players will move their units back and forth, and use the range advantage to pick off enemy units one by one, thereby making it very difficult for their opponent to target and focus fire the fleet ship by ship. Carriers are the only unit that can continue inflicting damage while retreating at the same time; players can even attack a unit in range with a group of Carriers, and then move the Carriers out of their effective range and the Interceptors will still hit the target at least once before retreating. The Interceptors will continue attacking while the Carrier is moving provided the target is in the Carrier's effective range. On the downside it takes a significant amount of time to move across a large map, allowing the enemy to take advantage of your position while you are away. In small numbers and over open terrain they can be destroyed very easily.

Carriers are rarely used versus Zerg, mainly due to the very high effectiveness of Hydralisks, especially when used in conjunction with the Defiler's Dark Swarm and Plague. Additionally, Scourge may be used to dwindle small numbers of Carriers. However, if the Protoss player is able to safely secure a number of expansions and build up Carriers, they become highly destructive, even more so when combined with the anti-air unit - the Corsair - in large part due to the increased mobility this combination provides by virtue of being air units but also because of the added security against ground-to-air attacks granted by the Corsairs' Disruption Web ability.

Carriers are a common sight in late game PvT when the map is better suited for their use than Arbiters. In PvT, when a Terran player sights Carriers they will generally mass Goliaths, so seeing Carriers accompanied by a sizable force of Dragoons, which can be extremely effective against Goliaths, is a common sight. EMP is not a good choice against Carriers since first Vessel with EMP costs more that 400 gas and a Vessel will certainty die after casting EMP. Carriers are commonly used on maps with tight pathing, many corridors, cliffs and other terrain features which make Goliath pathing otherwise unwieldy. In late game PvT, Carriers are used to help break Terran positions, often targeting tanks so the remaining Protoss ground force can be more useful. Additionally, Carriers are effective harrassers if the terrain allows for it: hiding behind cliffs to pick off Turrets, SCVs, Goliaths, etc., in order to help shift late-game momentum to Protoss' favor. Protoss players generally opt to go Carriers when they are having trouble with Siege Tanks, Vultures and Spider Mines which only attack ground.

Dragoons lack the attack range and mobility to effectively counter Carriers on their own, though they do decent damage to Carriers caught in the open. Although Scouts can take out Carriers when in large numbers, they require time to amass and upgrades to be effective. You may use the Moving Shot to get the most out of your Scouts.

Carriers and their Interceptors are much more vulnerable to Protoss spells, such as Psionic Storm, Stasis Field, and Mind Control than to direct combat.

High Templar are a high priority target for Carriers, so it is best to quickly get your storms off before they are targeted and eliminated. Dark Archons are difficult to mass, and require 100 energy + the 50 they start with to use Mind Control, so it is best to get them only if you see your opponent getting Carriers early or if your opponent is predictable. Arbiters can Stasis Carriers, eliminating their mobility so you can position your units under them and kill them when they unfreeze.