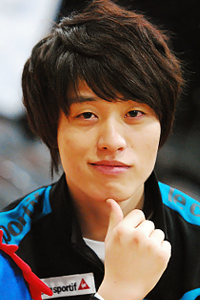 [1] After earning a formidable online reputation in his guild, n.Die_, Lee Seung Hoon was signed to KOR after the 2006 draft after impressing coaches in trials with current members. [2] The investment would pay off, and despite losing his first proleague match, formed a strong 2v2 combination with Ju Jin Chul (Side_LeGenD). Together they would be the crux of the OGN 2v2 effort.

Seung Hoon first made his name on the scene in a rather embarrassing way. In in OGN/KTF proleague match in season 2 of 2006, Seung Hoon accidentally used the 'to-all' chat command and typed '아놔 씨발', which translates to 'Ah Fuck!' (screenshot here). This was appropriate for his team, as they were getting destroyed by Park Jung Suk (Reach) and his partner Lim Jae Duk (Zergbong). However, for the viewing audience it was not appropriate, and the team was fined and docked a point in proleague.

Seung Hoon was dissatisfied with his position as 2v2 player and vowed to make it big in the 1v1 stage. He practiced hard, and at one stage won no games for three days straight. However, with pure determination became one of OGN's strongest 1v1 players. His first chance to show off his new found skills was at the 2nd KeSPA cup; where he proceeded to all kill an impressive Samsung KHAN lineup (Song Byung Goo, Byun Eun Jong and Park Sung Jun - Stork, JJu and ZergMaN). This earned him many fans in both Korea and Teamliquid.net. He then proceeded to advance from the 11st MBC Movies Survivor to qualify for GOM TV 2 MSL.

In Season 1 of Proleague 2007 he took center stage for OGN, demonstrate countless ceremonies. All of which were highly entertaining. Some say that he inspired the wave of ceremonies to erupt from almost all progamers in 2007. Nevertheless, with his new found strength and unmistakable aggressive style in combination with his shameless ceremonies he quickly became a fan favorite. He has met more controversy in his playing career, like the time he forced a draw on Nemesis against Ahn Gi Hyo (Nal_Rock) when he was clearly in an inferior position.

Despite not doing too well in GOM TV 2 MSL and having no other major league results, he is on the verge of becoming an extremely successful protoss user reminiscent of teammate Jun Tae Gyu (Zeus) who also had very flamboyant ceremonies.

His inconsistent progaming record and his ultimate dissatisfaction with the life of a progamer led him to go to the military in September 2009.[3]

Chalrenge is generally not remembered for his games as they are generally uninspired save for his extremely long PvP with Rock, where he forced a draw. He is rather remembered for his multiple ceremonies, although he had dropped into relative obscurity after KeSPA banned ceremonies. He has also been penalized once in 2006 for accidentally typing "Oh, fuck" in a 2v2 in all chat instead of allied chat before the final GG.[4] His multiple ceremonies are detailed below.