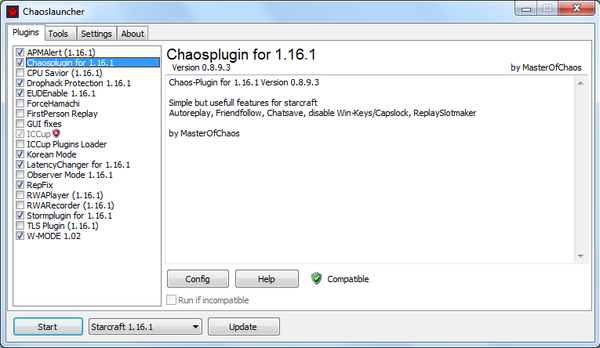 Chaoslauncher is an open source third-party launcher for StarCraft that allows the user to inject any universal plugins.
To add BWP plugins, simply install AdvLoader in a separate folder and the plugins will show up in Chaoslauncher. Copying BWP plugins into the Chaoslauncher folder will not work!

Some plugins may need administrative privileges in order to work, this can be done by right clicking on Chaoslauncher.exe and running it as admin.

First download the old StarCraft executables (See BWreplays on using old Versions).
Then extract these to your StarCraft directory.
After a restart Chaoslauncher displays all available versions in the combobox on the bottom.

Adding tools to the traymenu[edit] 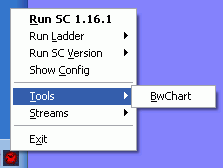 You can add your own tools to the Chaoslauncher traymenu to make them easily accessible. You add these entries in the Tools tab of Chaoslauncher. Each tool consists of a name which gets displayed in the tray menu, the path to executable which should be opened, and a parameter string which gets passed to the executed tool.
You could also add the path to your LastReplay.rep to the parameter field, so BWChart automatically opens this replay.

First make sure you are using 1.6.0.129 and no earlier versions. Then copy the iccscbn.icc from the iCCup Launcher folder to the Chaoslauncher folder. After a restart Chaoslauncher will display a new version called ICCup 1.16.1 in the versionlist on the bottom. If you select this version, only whitelisted plugins compatible with ICCup can be enabled.
Warning: There is no official permission from iCCup to use third-party launchers.

Hamachi is a Local Area Network (LAN) emulator over the internet. People log on to Hamachi like MSN, but instead of chatting with each other, the connected computers now think they are on a single LAN. Since Brood War has LAN support, you can play games against each other on UDP via Hamachi (on a side note, this is part of the reason SC2 doesn't have LAN support).

The Chaoslauncher with ForceHamachi plugin let you play Brood War on Hamachi. An older version of hamachi is needed for it to function with Brood War. The Force Hamachi plugin does some nifty tricks, without it you can't play. Don't forget to play on UDP once you're logged onto Hamachi!

Install Chaoslauncher if you didn't already (see top of this page). Download the ForceHamachi plugin and put it in your chaoslauncher installation folder. Download and install Hamachi. Start Hamachi, and join TLnet//123 or TLnet2//123