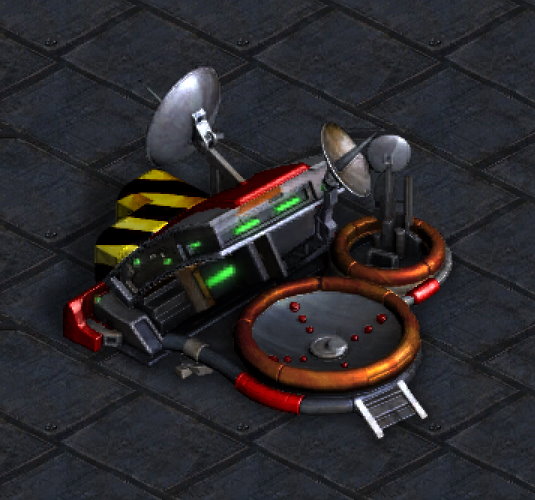 The Comsat Station, often called a "Scanner," allows Terran to gain vision and Detection over a finite area on the map for a short amount of time (from about seven to ten seconds). The Comsat Station is a vital tool in the Terran arsenal for reconnaissance and cloak detection. It allows the Terran to to spy on the opponent and see what they are up to, watch resource spots to determine when the opponent has expanded, and reveal cloaked and burrowed units.

Using the Comsat Station once to scan an area costs 50 Energy. The maximum Energy that the Comsat Station can accumulate is 200, for a total of four possible consecutive scans. The size of the revealed area is slightly smaller than one visible screen.

The scan is conducted by selecting the command (i.e. pressing the 's' shortcut key or left-clicking on the command) and then clicking either on the desired position on the Minimap or directly on the field of battle. The scan triggers a short, high pitched sound effect coupled with a quick animation of sparkling stars at the epicenter of the scan. A Comsat Station is built faster than it can recover 50 Energy, so in situations where detection is highly desired, the existing Energy-depleted Comsat Station can be destroyed with a new one built to obtain detection faster. SCVs or other inexpensive units can sometimes be preferable to scout the map rather than consuming Comsat Energy.

It is common for the Terran player to assign hot keys to each Comsat Station, such that a scan can be quickly activated in the midst of an attack to detect cloaked opponent forces. As soon as the Comsat Station starts building, it can be assigned to a hot key.

Strategically, being scanned by a Terran opponent may be an indicator of an impending attack at the location of the scan.

The construction of a Comsat Station can be blocked by buildings or immovable units. As such, fixed buildings such as Supply Depots are not built to the immediate right of Command Centers.

Instead of the Comsat Station, a Nuclear Silo may be added on to the Command Center, but Nuclear Strikes are rarely used in professional competition. Only one add-on can be selected for each Command Center. In practice, Comsat Station is elected as the preferred add-on on all Terran Command Centers to maximize scanning capability.