A "contain" (containment, to contain) is a tactic, which can be used by any race during a game. Contains aim to deny access to special locations on the map. Depending on a player's commitment, it can be a key move for a game or a temporary maneuver to obtain advantages. 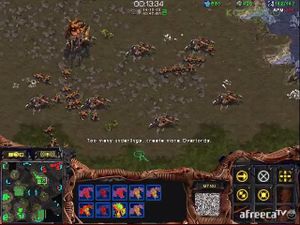 ZvP contain: Zerg units (Lurkers and Zerglings, in green) congregate at choke point outside of the Protoss (red) base while expanding and preparing for Protoss to break the containment. Note congregation of green units on minimap.

Contains can be put into two categories. Both techniques are used in almost all matchups, except for the Zerg mirror.

Temporary contains rely on mobile units and do not require the performing player to construct additional buildings. In most scenarios, one player sets up a contain by positioning units close to important places on the map, like in front of the opponent's base exit (chokepoint.) In this scenario, the containing player usually commands either a larger ground force or a stronger unit composition. A prime example of such containment is the first six Zerglings being positioned close to a Terran's Natural Expansion after Terran opened with a Fast Expansion.

The goal of temporary containments in the early game is to deny scouting workers from leaving the enemy base. This way, the containing player directly prohibits the opponent from gathering intelligence. As a result, the containing player can switch strategies or trick his opponent into building more defensive structures than needed. In almost all cases, early-game containments serve a second purpose: creating a warning system. In the example explained earlier, Zerg would get an alert message whenever Terran tries to launch an attack.

In the mid and late game, temporary containments with mobile units can be set up to block expansion spots or important passageways across the map. However, the term containment overlaps here with ordinary army movements and is not used often. 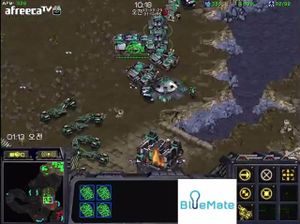 TvP contain: Protoss trapped inside its base at a choke point by Terran units (Tanks, Vultures), buildings (Bunker, Turret), and terrain (bridge and land/water boundary). Note the concentrated Terran position in green on the minimap.

Either Terran or Zerg will usually do early-game containments against Protoss. In the first example, Terran opens with a one-base strategy and launches an attack towards a Fast Expanding Protoss. Once the Protoss' Natural Expansion is in range, Terran sieges his Siege Tanks. Since the number of Dragoons poses a danger to the Tanks, Terran will often build a Bunker, Turrets, or stray Supply Depots to decrease the chances of a containment break by Protoss. If the containment breaks without dealing a sufficient amount of damage, Terran is most likely disadvantaged. Zerg can also react similarly to prevent the Protoss ground forces from controlling the map by setting up a containment with Lurkers, one or two Overlords, and Scourge. Lurkers deal damage to Zealots and related units, while Scourge can quickly neutralize Observers. However, in contrast to the Terran containment, Zerg usually doesn't aim to kill an expansion with this strategy. Instead, Zerg tries to add Hatcheries and expand while Protoss must train enough units to break the containment.

In later stages of the game, the containment logic can be applied to other parts of the map not related to expansions. Zerg might abuse high ground ramps to block Protoss and Terran armies from effectively attacking an expansion. Terran can do the same with Siege Tanks, Vultures, and Spider Mines. However, in most scenarios, late-game containments are done by Terran against Protoss, similar to what was described earlier. After the first or second large attack, Terran usually sets up a containment in front of the Protoss main base to prevent reinforcements from reaching the map's central area.

Since containments are an abstract idea, the term's definition and the difference between "contain" and "harassment" is somewhat vague. Some commentators, players, and editors of guides claim that strategies like Mutalisk harassment against Terran are forms of containment. Other examples of "containments" are described whenever Protoss uses Dark Templars against Terran or Zerg; in this case, Terran/Zerg can not exit their own bases without detection.

Consequently, the usage of "containment" in comments, guides, and game analysis is subject to the respective author's interpretation. 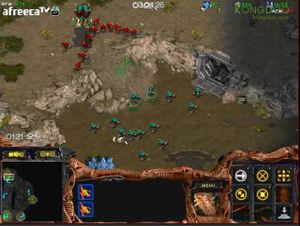 ZvZ contain: The green Zerg player places Zerglings below the ramp of the red Zerg, thus preventing scouting and expansion at the natural. Both players are forced to consider how to exit the situation, balancing continued unit production or technology advancement, such as air units.

Contains, permanent contains in particular, go hand in hand with a higher risk of losing the game if the technique fails. Consequently, a cost/benefit calculation is important for both players - the player facing a contain and the player performing it.

First, and most importantly, a containment should pay off in terms of economic advantage. If an early-game containment is set up it requires a high economic commitment; units are produced instead of workers. Hence, the opponent needs to suffer a similar economic or technological disadvantage before the containment fails.

Secondly, any containment requires a mechanical commitment. Whenever a containment and its defense requires more attention than can be performed, the containment might fail. In other words, if a rookie tries to maintain his containment intact but can not keep up his base management while microing his units, the containment will most likely backfire, even if the opponent fails to destroy it.

Thirdly, map features come into play. Narrow passages on the map, like ramps or bridges, help when setting up a containment. Ground units, which have to pass through these points, will be automatically funneled and will suffer additional damage from area-of-effect units like Siege Tanks or Lurkers. Moreover, units in a contain fighting downhill will receive an additional indirect bonus: units fighting from the low ground will have a chance to miss. 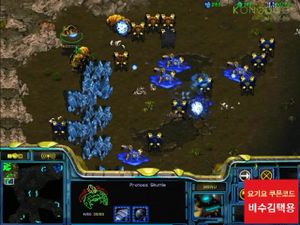 Players facing a contain have several options to break through a containment.

The most obvious solution to fight a contain presents itself in a brute force attack. In this scenario, the contained player will gather enough units to destroy the containment in a massive attack. Effective Micromanagement to maximize the damage output is key. However, this solution is not the easiest, as the containing player will try to provide as many obstacles as possible. In this scenario, both player's attention will be on the battle.

In other scenarios, the contained player might use transport units such as Shuttles, Dropships, or Overlords to manually transport several units out of the contained area. This maneuver is called an Elevator." The units transported can either attack the undefended opposing base(s) or help a brute force attack from two sides.

If flying units such as Mutalisks are available against a Terran containment, the Terran player's reinforcements might be cut off from joining the contain. Over time, the containment will lose its power due to lack of reinforcements. A follow-up brute-force attack will then be very likely to succeed.

Another variation to break a contain is a combination of the previous two points. If elevated units can not effectively attack the opponent base, they can be used to intercept reinforcements.