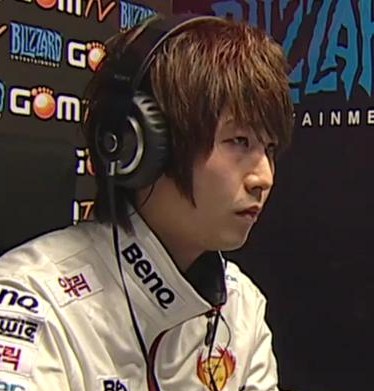 He played Terran in StarCraft II for StarTale.

[1] In the end of 2003 a rising progamer started show off his skills and beat great players on his way to glory. He had already made an impact in the World Cyber Games of the same year placing 4th, losing only to Lee Yong-Bum (Ogogo), Guillaume Patry (PlayGrrrr...) and Fredrik Keitel (Fisheye). The crowd was on their toes as the unknown star cheesed his way to the bronze match of NHN Hangame OSL. As much as he got fans as the rising star he surely made a lot of people burst out. 2004 was the perfect year for Doh Hyun, as he got recognised and actually rolled his way through to the 3rd place match of OSL twice in a row. Both times cleaning his way with more or less cheese strategies. Doh Hyun disappeared from the Starleagues as suddenly and quietly as he had appeared.

He was not seen anywhere for a while, except for the Proleague where he made an impact with his team Pantech & Curitel Curriors. They won the second round of Proleague 2004 and continued later on in the year to face Hanbit Stars in the grand final. But that match they lost.

The most dramatic day for Doh Hyun of his career was 14.5.2004 when he suddenly collapsed and fainted, just before an Ongamenet Starleague Gillette 2004 match against Park Tae-min (GoRush). He obviously was just over exhausted, because of massive amount of training and that caused him to faint on the stage. The community went wild as rumors of him having some serious disease, people even talked of tuberculosis, started to spread. The stories how ever stopped pretty soon as official information was released by the team. Silent_Control agreed to play a rematch against GoRush on 21st day, and went on to finish 4th in the tournament. But after these events Doh Hyun started to fade from the proscene, as he took some time off of StarCraft under the request of his family.

He made a surprise comeback in 2005, when he fought his way through the WCG Korea second time in his life and got a spot to represent his country in the Grand Finals in Singapore. Not much was expected of him but in the single-elimination brackets he gave the community another shock as he defeated Xellos, the reigning champion, in the first round with a 2-0 score. But as if it was a curse once things start going well for him he must drop down as the Russian player Andrey Kukhianidze ([3D]Androide) 2-0'd him delivering us the biggest upset of the whole tournament.