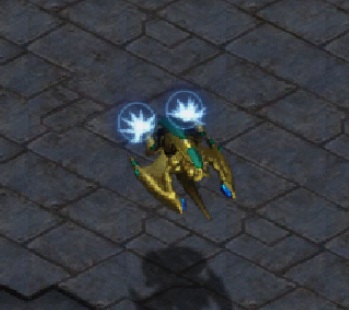 First introduced in the expansion set, Corsairs are fast, highly mobile units with considerable harassing and scouting potential. They have a small 50% splash attack that is very useful against clumps of enemy air units. Corsairs can learn one spell, Disruption Web, which can be researched at the Fleet Beacon. Disruption Web prevents all ground units from attacking while under its area of effect.

Their splash damage more often than not allow them to get total dominance of the air since in sufficient numbers the damage they can deal through splash whittle down fleets in a few volleys.

Their attacks come at an extremely high rate of fire per second, making micro a bit trickier. It should be noted that many players wrongly use them vs Battlecruisers and Carriers. These units have very high armor, and only when Corsairs are upgraded can they do considerable damage which will be nullified by any armor upgrades. Generally, Scouts outmatch Corsairs at capital ship hunting.

Typically though, they are far better for their cost than Scouts and not dependent on the speed upgrade to chase enemy air.

Disruption Web covers a 120x80 pixel area for a duration of 24 seconds (or 15, using real world time measurements), preventing all units and buildings under it from attacking. Casters are still able to cast, but spider mines will not activate. Each cast costs 125 energy.

With the Argus Jewel upgrade, a Corsair with maximum energy can cast Disruption Web twice quickly.

Made famous by Bisu, Corsairs are a mainstay of modern PvZ, oftentimes being the only means to scout the Zerg after the initial Probe. Many players opt to build a Stargate>Corsair as their first advanced unit, because without the intelligence from Corsairs, the Protoss player is in the dark regarding Zerg tech and builds. Additionally, Corsairs are often used to scout for the locations of Zerg expansions and the Drone count/saturation.

Corsairs are also used in a harassment role, killing Overlords when the opportunity arises. The Protoss player can choose to either keep producing Corsairs, or stop at just a few. If the Protoss player intends continually making Corsairs, he has the option of doing a build such as Corsair/DT, which relies on Corsairs to keep enemy Overlords away while the DT harasses and takes map control, or Corsair/Reaver, a sometimes used strategy which revolves around massive harassment efforts to shut down the Zerg economy and bases.

Finally, Corsairs can be used as more or less defensive units if the Zerg opens a 2 or 3 hatchery Mutalisk build. Combined with cannons at the mineral lines, a few Corsairs help ensure that the Zerg Mutalisk harass isn't game-breaking.

Corsairs are sometimes used for Disruption Web. This spell holds some utility in preventing enemy Tanks from shooting in their sieged positions. However, it is rarely used because of the large cost in making Corsairs, researching the spell, and investing time potentially spent elsewhere. It also has a direct counter - EMP + Goliaths with range upgrade. fOru employed the Corsair to great effect on Lost Temple, using Disruption Web to break a Terran push and win the game. This was exemplified again by Horang2 in his match against Piano on 30 November 2011.

A single Corsair can also potentially serve a scouting purpose in certain carrier builds so that the Robotics Facility can be delayed. This is useful when making Carriers on two or three bases because of the amount of resources saved over building a Robotics Facility and an Observatory, thus allocating more resources for Carrier production in the crucial early periods of the build. The Corsair has the additional effect of deterring drops and single Wraiths, as a Corsair defeats a Wraith 1v1 (as long as the wraith is visible). The inclusion of a Corsair in a Carrier PvT build was shown to great effect by Jangbi against Fantasy in the finals of the 2011 Jinair OSL. Jangbi made a single Corsair to scout and kill minimal Terran air units in order to streamline his build by delaying the Robotics Facility.

Despite their potential utility, Corsairs are very uncommon and rarely used in modern PvT, though in recent games (as of 12/2011) the popularity of the corsair in PvT seems to be rising.

Corsairs are virtually unused against other Protoss, as they serve no purpose that cannot be filled by other units to greater effectiveness. In Bisu vs Nal_rA, GOMTV MSL S1, rA attempts to make use of the corsair by deflecting multiple Shuttle harassment attempts while teching to Carriers in this semi-island map.