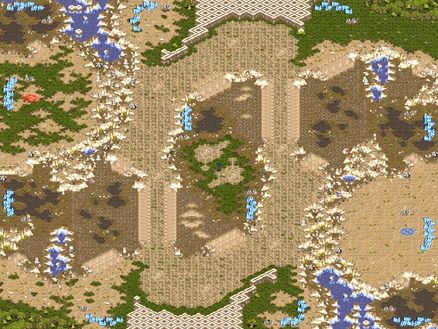 Crossing Field is a Starcraft: Brood War map made by Waldstein. It saw immediate use in the Ginyuda Team Battle and the KCM Legend Match. The map was selected as a contender for the Afreeca Starleague Season 4 map pool[1], and was subsequently voted in.

The middle of the map is closed down and somewhat cramped with a lot of cliffs, but it has multiple attack paths for flanking maneuvers. The main and natural expansions are very vulnerable to drops from the side, especially since the map tends to get cut diagonally in manner similar to Blue Storm. For example, players at the 4 o'clock position tend to eventually expand to the 11 o'clock expansion. As a result, drops and air harassment tend to remain a factor for most of the game.