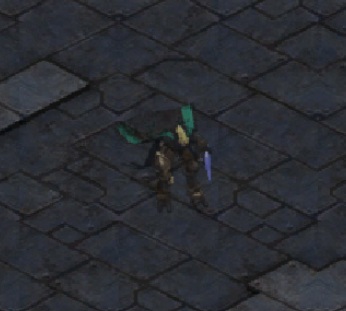 The Dark Templar, commonly abbreviated as DT, is a permanently cloaked Protoss ground unit. It is built from the Gateway if there is an existing Templar Archives. The Dark Templar attacks slowly but has a very powerful non-upgraded 40-damage attack that can kill a Protoss Probe or Zerg Drone in one hit, and a Terran SCV in two hits. The combination of cloak and high amount of damage dealt makes the Dark Templar extremely useful for worker harassment, as a unit dying in one hit will not trigger the "Your forces are under attack!" warning to the opponent. If the opponent does not have detection in the affected base, nothing in the mini-map will indicate the presence of the Dark Templar. This significantly impairs the opponent's ability to react to and mitigate damage from Dark Templar harassment. The Dark Templar can only be revealed by some form of Detection.

The Dark Templar is an especially effective unit against the Zerg when paired with the Corsair, which can quickly kill off detection Overlords. In competitive play, it is common for the Protoss player to opt for a Corsair/Dark Templar build or Bisu Build. In these builds, Dark Templar are most effective after Corsairs clear out any Overlords, thus allowing the DT to maneuver around undetected. The map control provided by this strategy is very effective and forced Zerg players to come up with counter builds. DT's often enter the Zerg base through a Shuttle drop to further evade attack at the Zerg chokepoint or Zerg entryway. Although mainly used to harass, four Dark Templar can quickly take down any tech building, such as the Hydralisk Den or Spire.

The Dark Templar is also useful for defending if the Zerg does not bring any Overlords for detection. For example, in Anytime vs YellOw, So1 OSL, Anytime uses a very unusual Dark Templar rush without any Corsairs, and concludes with victory.

Additionally, Dark Templars are very useful in scouting and preventing enemy expansion attempts, as well as picking off stray Drones at unguarded expansions. Since Dark Templars kill Drones in one hit, the enemy will not receive a warning that they are under attack. Careless Zerg players can lose entire expansions worth of Drones if they are not vigilant. Killing any nearby Spore Colonies enables the Protoss player to use Corsairs and DT's in having free reign over an expansion if there are no nearby anti-air units.

In long PvZ games, it is also common to build some DT's that are then left behind at the Protoss player's chokepoint. These DT's act as defensive players in case of a backstab as the Zerg opponent opts to attack the Protoss when its primary troops are in a distant location. If the Zerg forces do not include an Overlord, the DT's are very effective in holding off attacks by Zerglings, Hydralisks, and Lurkers.

The Dark Templar is usually used in two ways in PvT: as an all-in tactic or simply to harass and delay the Terran while the Protoss takes his third base. It is a very potent unit in PvT, and can cause a lot of trouble for the Terran if it is not adequately prepared with detection and/or Spider Mines. After gaining entry to the Terran base, the Protoss player will normally order the DT to destroy unguarded Missile Turrets first, thus eliminating detection, then any SCVs who are actively constructing Terran structures to delay the Terran's production or ascent up the tech tree. DT's are slightly less effective when harassing SCVs, as compared to Probes or Drones, because they cannot kill SCVs in one hit.

Dark Templars can be used to "Zealot Bomb" if there is a dense cluster of Siege Tanks or some Spider Mines close by. This can be very effective because the DT will not die if there is no detection, and a nearby mine would drag itself to the DT and blow up, possibly killing the DT (although it is noted that two Spider Mines are necessary to kill a DT with full shields and health) and hopefully the large cluster of Tanks the DT was dropped it. When micro'd properly, the Dark Templar can defuse mines when facing the mine and in the Hold Position. This is possible because the Dark Templar slightly out-ranges the Spider Mine such that the Dark Templar can kills the Mine in one hit. This technique was famously used to great effect by Much against Firebathero. Much vs Firebathero

In the PVP match-up, Dark Templars are not used as often as other units produced by the Gateway, but still serve a purpose. In some cases, Protoss players will opt for a quick DT rush to surprise the Protoss opponent who does not scout properly or build Observers. In more conservative builds, Dark Templars by the mid game can provide map control, scouting for expansions without detection. Oftentimes, Dark Templars can be dropped into the opponent base and sent to attack any harvesting Probes, thus disrupting the opponent production. This is particularly effective if no Observers or Photon Cannons are present, or if the opponent's troops are stationed far away. Since Dark Templar kill Probes in one hit, there is no warning to the Protoss opponent that its Probes are under attack. Careless players can lose dozens of Probes to a single Dark Templar (see Bisu vs Jangbi Clubday MSL Finals).