The defiler.ru Tournaments are a tournament series hosted and organized by defiler.ru's community that started in 2010.

The first edition of the defiler.ru tournaments was hosted on the 12th December 2010 by yoda in cooperation with the Russian StarCraft Brood War portal reps.ru. In January 2010 the tournament series was advertised on ICCup's main page[1] and English as secondary language was offered by defiler.ru. Consequently more international players joined the most recent tournaments. In between December 2010 and January 2013 more than 100 tournaments were hosted on defiler.ru's portal.[2]

The official Defiler Main Tournaments are irregularly hosted on Sundays. All tournaments are organized by either yoda or other members of the Russian scene, have a crowd funded prize pool of $75 and use the current ICCup MOTW. The tournaments start 9:15 AM CET. All participating players have to play in a double-elimination grid, with the winner bracket being best of three, the lower bracket being best of one. The overall final is best of five, with the winner of the upper bracket having a one win advantage over the winner of the loser bracket. Only eight players have managed to win more than one edition of the series.

Aside from the main tournaments some bigger cups were hosted in 2012. These used the same mode and maps like the main tournaments, but had a larger prize pool, sponsored by Sergey Mavrodi and Plantronics or were restricted for Russians only. In 2011 the Defiler Tour 10 was another exception from the rule, as only the sixteen best players of the first editions were allowed to join.[3]

In between 2010 and 2012 ten so-called Perversion Tournaments were hosted by Lisyonok and reps)Anophele. These featured different maps and game modes. Usually either non-competitive maps like Blood Bath or specially designed maps (the Defiler Perversion Maps) were used to form a map pool. For the fifth volume a Brood War flash game was used as qualifier for the actual event.[4]. The tenth version featured ordinary maps, which featured a 'speed hack'.[5]

In 2011 ten Mini Tournaments were hosted by Pro7ect, Plumbum and Defi. These tournaments used ordinary maps, had a prize of $10 for the winner, featuring a single-elimination bracket with the matches being best of one. In the Winter of 2012 the series was revived by Defi and had ten smaller and one big volume. 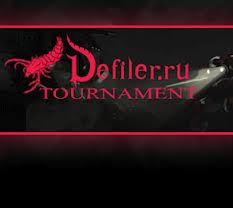 The Defiler Tournaments had a major impact on the Brood War scene outside of Korea, post-StarCraft II. After the majority of notable foreigners left the community, only few tournaments and prestigious events were organized. The Russians filled the gap, being on of the first to host tournaments with prizes. About 200 viewers follow the Russian cast of yoda for each edition on average. Since at least one tournament or event was hosted on defiler.ru per week, the series was able to establish a new who-is-who for the international scene. The competition was higher than in most other tournaments, because of the relatively high number of participants and an internal seeding system used to balance the brackets. Especially the players that were able to win more than one medal gained a lot of reputation among the viewers and the other participants. Occasionally stronger Korean players joined the tournaments. The best of the Koreans was arguably the ex progamer In_Dove.[6]

In the first two months the defiler tournaments were restricted to the Russian scene. Only in the sixth edition and onwards were international players allowed to participate. With Sziky and the Korean-American Scan joining, a trio dominated the scene until mid 2011. More than 40% of the prizes were paid to either Heme or the other two before-mentioned international players. The rest of the participants had a hard time to overcome the huge gap that divided the three from the rest of the international players. The trio eventually fell apart when the Russian Terran went inactive in the Summer of 2011.

With Pro7ect returning from his mandatory military service in Korea[7] and the American Michael entering more tournaments, the gap started to close. Additionally more notable players from outside of Russia improved and regularly finished higher in the series. After the MMM Tours in Summer 2012 the era of Scan and Sziky ended; both players focused on different tournaments or went inactive in the Russian tournament series. New players like Dewalt and eOnzErG took over the role of the tournament favourites. Additionally a number of veterans, like TechnicS, Arcneon and gargoyle returned from inactivity and started to compete for the prize money as well. Especially in December 2012 a new rivalry between TechnicS and eOnzErG started in the Defi Mini Tournaments. Both players faced each other more than ten times in the deciding stages of these tours.

In May 2012[8] yoda announced a new sponsor for the portal: Sergey Mavrodi. With the help of Mavrodi's project MMM-2011 the prize pool of the tournaments would have been boosted, in exchange for the tournaments being called "MMM Tours" and the casts promoting several advertising clips. The main user to promote this idea was Heme, who came back to Brood War recently. However, due to Mavrodi being convicted for fraud in 2007[9] and the general reputation of Mavrodi's latest financial scheme, a controversy on defiler.ru[10] and later on Teamliquid[11] started. Eventually, after the third tournament, the sponsor left and the series turned back to crowd funding.

Defiler.ru uses a lessez-faire policy. Users are allowed to trash talk, as long as they do not cross a limit. No player has been banned from the official Defiler Main Events, even though Scan was being accused of hacking on occasion. Most disputes are not settled and the organization rarely follows any kind of rule set. Lag issues, disconnects and walkovers are handled on a case-by-case basis; usually the referee waits until one player comes back and ignores the requests for walkovers. In other cases a coin is flipped to determine the advancing player in case of an IP conflict.[12]

"Admin is lazy. If he does not reply to you, you should repeat the message after several minutes." -- Rule VI[13]

Consequently, the defiler.ru administration is widely seen as unprofessional in terms of administration, but still highly respected among players for overall fairness and their contribution towards the community. The general atmosphere of a tournament is very relaxed and almost no complaints are being made during or after any events.

Until Heme's retirement in mid 2011 the Hungarian and the Russian had to play each other quite often on almost each week end. The outcome was most times uncertain and depended on the daily form. The games ranged from horribly one-sided to long lasting macro battles. Interestingly enough: both players faced each other in the late stages of the tours.

The rivalry between Sziky and Scan was very emotional, as the supposedly Korean "Ex Pro Gamer" is known to flame a lot. The games between these two had a lot of tension, promising interesting macro games in the very important late stages of the tournaments. Until the 25th tournament Scan seemed to be the only one having a shot at stopping the Hungarian from taking more titles - and replace Heme's role as the contender to the throne. The Terran made a better opponent in terms of being a stereotypical villain; his over-the-top behaviour spiced things up, often to the amusement of the audience.

eOnzErG and TechnicS often played against each other during multiple events in late 2012. The duels were often spiced up by trash talk. Especially in November and December 2012 both seemed to compete for the title 'second best Zerg' (after Sziky). In the overall statistics TechnicS leads by two games.