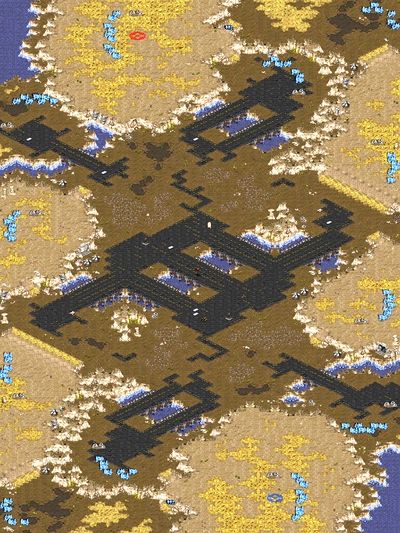 Destination is a fairly standard two player map that was introduced in the 2008 ClubDay MBCGame Starleague. This map was also used in the 2008-2009 Shinhan Bank Proleague, and the GomTV Avaratec-Intel Classic Season 2. The map is known to host many mech TvZ's as it favors Mech over standard Bionic play.

This map is very popular for cheeses as well as proxies because of the short rush distances between the bases, as well as the fact that it is a two player map.

Due to short rush distances 2 Gateway openings are supported on the map in mirror matches. However, if both players chose such an opening, usually a more conservative varation is used, in order to expand with the help of Zealots. The initial Zealots are used to block the brigdes. A similar strategy against other races is not recommended.

In older days, Protoss usually opened with a 12 Nexus against Terran. In modern Brood War this strategy doesn't pay off too well, as Terrans adapted to it. The main idea is still to expand as fast as possible and to keep Terran contained in his own main base for as long as possible. Terran can usually secure half of the map relatively easy, due to the many bridges and ramps creating choke points.

Similar to the 21 Nexus, the Dark Templar Fast Expand Build tries to gain an advantage by expanding as soon as possible. Usually this line of aggressive expansion is chosen, if the Terran loses his scouting SCV early on and goes for a Siege Expand opening as reaction.

The two player map allows for a designed strategy, which tries to steal the Terran's Gas income. By blocking the opponent's main base Geyser Terran has delay mechanical units for a longer time frame. The follow up by Protoss is a transfer of ground units into Terran's main base. However, the strategy itself is risky and often loses its momentum, if it was scouted or anticipated.

2 Base Arbiter and 2 Base Carrier

In modern Brood War Terrans usually try to force a map split base wise onto the Protoss. Protoss can try to hard counter this strategical idea by going for either very fast Arbiters or Carriers. Both are then used to harass the Terran if he tries to take control over his side of the map, while the Protoss tries to expand as much as possible. However, these ideas might lose momentum if the mid game transitions are scouted in time.

Against Zerg Protoss deals with several problems on Destination. The short distances between the two starting locations theoretically support rushes. Due to improved Zerg Sim City techniques this kind of strategy usually is hard countered, however. In addition, Zerg has plenty of options to open with aggressive builds, such as 2 Hatch Hydra, and/or try to aim for a mid game Zergling/Lurker contain. In modern Brood War the 3 Base Spire into 5 Hatch Hydra transitions replaced Lurker contains.

The Neo Bisu tries to circumvent all these problems and enables Protoss to build up a massive mid game army, which can deal with most Zerg reactions. This Build Order does not aim to destroy Zerg in the mid game, but rather allows the trained Protoss army to roam the map. By trying to control the main ground, futher Zerg expansions, especially those with Vespine Geysers, should be delayed. In the meantime, Protoss wins time and space to expand on his own.

The Heojja Build exploits the second ramp leading to the spawning locations. By performing some tricks, Zerglings are glitched through the blocking mineral patch as early as possible. This works only against Protoss Forge Expand Build Orders.

A strategy designed by iloveoov, which enables Terran to produce mech units against Zerg. Due to a vast list of timings Zerg early- and mid game weaknesses are exploited, in order to allow Terran a strong attack.

Another risky opening by Terran. Terran opens with Wraiths and harasses the Zerg, thus forcing the opponent to build Spore Colonies and Hydralisks. While the air forces distract the opponent, Terran switches to a strong bio army and pushes out before Zerg can build adequate counters.

The "Mio Style" refers to a Korean Terran, who used to open with 2 Factory Builds on two player maps. Key to this line of strategy is to constantly attack as Terran in any way possible: Vulture Raids, Drops or small scaled Tank Pushes. In the meantime Terran expands rapidly and transitions to a more standardized late game. The underlying motive behind this strategy is to punish greedy Fast Expansions by Protoss. However, the many complicated pathes and choke points make it relatively easy for Protoss to adapt to the unusual aggression by Terran.

The statistics compiled from the YGosu.Com DB.

Note: the selected Cannon in the 5 o'clock setup is in range of a drone mining the back door minerals.

Note: Sunkens in the natural can be omitted