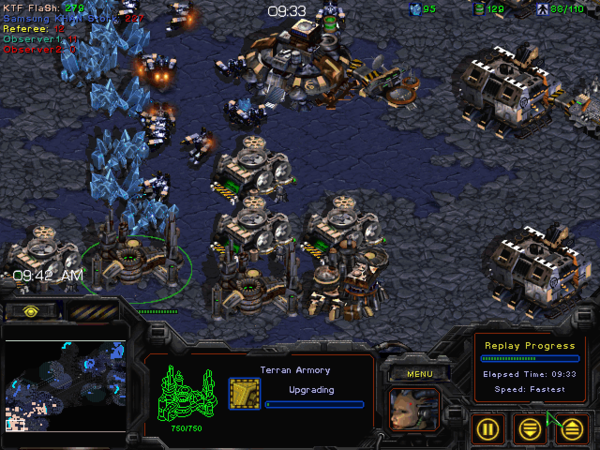 Flash. It is guided by its reliance on quick expansions, fast upgrades from two Armories, and a generally later upgrade-based push. The late-game upgraded push provided by the build can be very difficult for Protoss players to deal with.

This style and its variations are currently the definition of 'Modern TvP', and saw Flash to outstanding success in 2008 and 2009 amidst a sea of mediocre TvPers. A must-have build in any Terran player's arsenal.

The "Flash build" is more a strategy than a single build opening, which relies on an early expansion. This particular build order starts out like a normal Siege Expand. It is suitable particularly for a map like Colosseum, God's Garden or Medusa.

From this point on the build order splits up even more according to his build order, what position you achieved with the initial force and your personal preference. See (the chapter Transition) for more details.

The double armory build consumes a lot of early gas. This is the optimal timing to get everything as early as possible.

This build is a very greedy and defensive build, so the scout should be sent out as late as possible. For large maps, or players willing to take the small economic penalty for greater information, earlier scout timings are possible.

In order to gather minerals for a Command Center as early as possible, it is ideal to stop workers from mining gas which you will not need at this stage of the game. In this particular build 2 SCVs should be pulled off of gas @100 gas. The SCVs pulled off can be made to build the next two buildings, the factory and supply depot.

Depending on Protoss' build order (Zealot rush or not), scouting, and the rush distance, you must choose whether or not to add the marine before the factory, after, or at all. In general, it is ideal to delay building the marine for as long as possible. A wall-in will only require 1 marine, a non-wall-in will require 3-4. If no zealot is made and the scouting probe does not have access to the main, no marine is necessary.

If the Terran sees the Protoss staying on 2 bases and massing units, it is generally wise to make 4 factories before the 3rd CC rather than the normal 2. The Terran should wait inside their natural until they have built up a sufficient force to hold their 3rd or they detect the Protoss expanding further.

Because the Double Armory build tends to attack with larger armies later on, micromanagement isn't quite as important in comparison to macro-management. Getting flanked by a large army or stasised can still be a very large threat.

In general, the main parts of micro in this build consist of using small groups of vultures to delay Protoss expansions and to seize any moments of weakness to snipe probes. However, the Terran should mostly be conserving his army and not sacrificing large numbers of vultures to kill probes.

Because of the very fast starport, some dropship harassment is advised in addition to small group vulture usage. This can oftentimes delay the Protoss from taking their 4th and 5th bases, and if lucky, get a fair number of probe kills for minimal investment and risk.

The normal attack in this build is once +1/2 is reached. While this is situational, it is a useful point to start from in understanding the timing. Below are some variations of Protoss midgame strategy and how to play against them.

How the Terran proceeds in the mid-late game depends heavily on the Protoss. Versus a Protoss who expands extremely rapidly, the Terran should consider a push before +1/2 finishes. The way to confirm this is by noting their gateway count. A Protoss can have roughly 3 gateways per base However, if the Protoss decides to take their expansions at a slower pace, the Terran should mass until maxed. Basically, the Terran has no obligation to push if the Protoss is not expanding further or teching to carriers or arbiters off of multiple stargates.

Against a Protoss who goes for a fast recall, the Terran should attempt to handle the recall with minimal forces and reinforcements while attempting to defeat the remaining Protoss army head on. Should the Terran win this battle, they can often win the game by sieging up at the Protoss rally point or by killing several expansions at once.

If the Protoss goes arbiters but does not do a quick recall, the Terran should focus on acquiring several science vessels and emp'ing the arbiters and the Protoss army at any available opportunity.

Against a Protoss who goes for 2 base carriers, the Terran should mass turrets at key points while pumping goliaths and taking their 3rd after having a sufficient number of goliaths and turrets. They should either push out at an early or late +1/2, depending on when the Protoss takes their 4th base. By early +1/2 it is meant that the Terran should move out immediately upon +1/2 finishing, while later means that the Terran should attack while +2/3 is half or more researched. In some situations, such as a turtling Protoss, it is advisable to not leave the base until +2/3. However, this is often too long of a time to wait before first moving out.

Against all builds, the period when the Terran has an army advantage or has pushed out is the prime time to start new expansions. Securing and maintaining these expansions is the key to victory if the game is not ended in a single decisive push.

Since this build leads directly to late-game, there is no transition. It can however transition from strategies as diverse as 14 Command Center, FD Terran or Siege Expand

The Double Armory build relies upon having solid defense and game sense to deflect Protoss aggression while taking expansions as quickly as possible.

This build is ideal for players who excel mechanically but are weaker tactically. Unlike in a timing push or a 2 base harassment build, doing damage before the big push is not crucial and battle mistakes are generally more forgiving given the strength of the Terran lategame army. In addition, the outcome of the game is heavily determined by the ability of the Terran to ward off any early attacks and take their expansions as quickly as possible, while delaying the Protoss expansions as much as they can.

Players looking to learn this build should focus on watching Flash vods and replays, as he executes this close to perfection while repeatedly getting large economic advantages by expanding earlier than his opponent thinks he will.

In general, this is a very versatile and adaptable build. However it tends to be greedy, and as such suffers from aggressive mid-game attacks and economy harassment. Despite these apparent weaknesses, with proper defense and foresight all Protoss aggression can be blocked with minimal casualties. For example, when Flash expects or sees a Protoss massing units on 2 bases, he makes 4 factories before his command center rather than the usual 2, and makes more units before taking his 3rd.

The main threat to this build is not as much an aggressive but a rapidly expanding Protoss. Because the double armory build sacrifices army and harassment for fast upgrades and a roaring economy, the Terran cannot punish a Protoss who expands faster than normal with a standard 4-5 factory timing push. Nor does the Terran have the manpower to harass them to a sufficient degree. However, the Protoss must balance their expansion timing with that of the Terran. If the Protoss expands too quickly to a third base, a 2 base timing push can still be possible, but due to the greedy nature will generally be less strong than off of other Terran openings. Against quick 4th and 5th expansions from the protoss, a 3 base timing push can do major damage. Similarly, a Protoss who expands rapidly early on will not have the army strength to punish an aware Terran who takes their 3rd base immediately off of 1 factory - especially on maps with easily securable thirds. In short, the two Terran responses to known Protoss expansions/unit amounts are to either attack when the Protoss is at his weakest (after just completing an expansion, or just investing in stargates), or to attempt to keep up in expansions, relying primarily on defensive strength and superior upgrades. The Protoss therefore benefits from denying the Terran scouting information on his expansion timing for as long as possible while knowing the Terran's expansion timing and unit amounts himself.

In general: Maps where

In other TvP styles, the philosophy is to prevent Protoss expansions and reduce the strength of your opponent's economy by aggressive harassment with Vultures. By going into the mid to late game with relatively even economies, the Terran can abuse the strength and positioning of his units to set up an attack when the Protoss is weak. If the Protoss is allowed to take too many unchallenged expansions and/or loses too few Probes, the Protoss will, with adequate macro, have a fairly easy time holding off most large Terran attacks, unless caught in very unforgiving timing windows.

The Flash build is more than capable of producing mid or late game Vulture harass. However, instead of relying on Vultures to hurt the Protoss economy to set up the mid to late game, the Flash build approaches the match-up with a different philosophy. In place of trying aggressively to limit Protoss expansions, particularly in the early mid game, Flash build users generally respond instead with aggressive expansions of their own, relying on the fact that the Protoss invested minerals into his economy instead of attacking units as well as the general defensive strength of Terran - particularly with the use of building walls, Mines, Siege Tanks and weapons upgrades. It should be noted however that Vulture harass is an acceptable part of the Flash build mid game.

This strong economy will allow the terran to make a very powerful and upgraded timing attack that the protoss will have trouble with.

While the Flash style is naturally adjusted by maps, the overall mentality of the build is to take expansions quicker than the Protoss is prepared for while hiding one's intentions. On some maps, such as Colosseum II, it is very difficult to take more than 3 bases in the midgame. However, on others such as Andromeda and Medusa, more than 3 bases are defendable.

For example, in Flash against Free on Andromeda, Flash took his natural and mineral only off of 1 factory. Then he quickly took his 4th base, while secretly expanding to the opposite island. Free was not prepared for the rapid expansions of Flash and fell behind economically until he found Flash's hidden expansion.

In another instance, in Flash against Bisu on Medusa, Flash delayed his mineral only while still on 1 factory to block Bisu's early aggression. While doing so, he created a turret network around his base, blocking Bisu from getting any information on Flash's intentions. After doing this, he took the startling step of making his 4th CC while still on 2 factories. By the time Bisu found out about this abnormally fast 4th base, Flash was one step ahead. Because of Flash's strategy, Bisu's recall into Flash's mineral only, while normally a telling blow, was too late. Thus, Flash was able to end the game in one decisive push.

Flash vs Stork on Colosseum

Deflecting early aggression and proper timing of 3rd base:

Versus 2 base Reaver into Carrier: