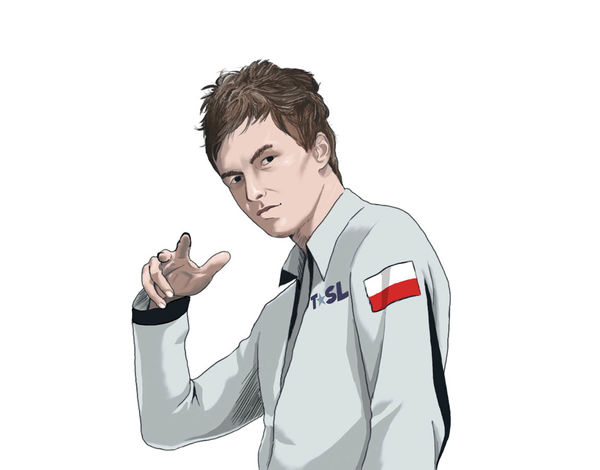 Krzysztof "Draco" Nalepka is a retired StarCraft progamer from Poland who played Protoss for OGN SPARKYZ.

Krzysztof Nalepka was born in December 1987 in Poland. He was one of a very few foreigners who was able to compete with the best Korean progamers. He joined OGN Sparkyz in August 2006[1], but left the team in February 2007. He moved to Kraków and started to study.[2] After retired from professional Brood War in February 2010.[3]

Draco started to play StarCraft Brood War in 1999 at the age of twelve in various Polish and international teams.[4] Even though he displayed big talent players like Blackman constantly overtowered the Protoss in these early years. He slowly gained reputation and notability in the international community after he joined pro Gaming, where he trained with the strongest foreign players like the aforementioned Blackman or FiSheYe.

After he improved greatly in the following years, Nalepka finished second in the WCG Poland in September 2004. In the mainevent he was able to advance from a comparatively easy group with a 2-1 record. With Advokate however, he faced a tough opponent in the Round of 32 and lost 1-2. Now Draco was not a nobody anymore and was considered to be a player to watch out for. In the following year he entered several of the biggest Eastern European Brood War LANs, such as the Rymarov Lancrafts and won three out of three events he entered. In the team leagues and ladders like the World Gaming Tour the Polish Protoss also finished very high.[5]

After pro Gaming recruited the Templars of Twilight in Summer 2005[6] Nalepka was without a team until he joined the Danish multi gaming clan Meet Your Makers in early 2006. While Draco participated mostly on offline events, Mondragon took over the role as most successful foreign player. In late 2005 however, Testie, SEn and eventually Draco started to make a run for that title as well. The first bigger tournament to feature the elite of the foreign scene was the GGL Americup Season 2, starting in winter 2005. Draco advanced from the group stage relatively easy, dropping games only against the likes of Advokate and defeating the already fading stars like FiSheYe. In January he continued his spree by defeating both Midian and XiaOzI, but was sent to the loser's bracket by Mondragon. By beating Pj the Protoss was almost able to get into the overall finals, but lost to his other rival Testie 0-3. The four players clashed again in the ToT Invite Tournament in between March and June 2006 again. Draco displayed strong play again and only lost to SEn, finishing second. Additionally, Nalepka was invited to the EuroCup XIII, an event that featured the 32 best foreign players. Again, nobody could really compete with the Protoss over a longer distance. Only Mondragon could stop the rising talent in the finals with a 0-2 again. In Jonköpping Draco went through the 1on1 tournament and eventually won the Dreamhack Summer quite easily over Daze.

Shortly after his win in Sweden Draco and his team mate Suncow decided to go to Korea,[7][8] paying the costs of their stay on their own.[9] In his first two weeks in Korea, Draco had no team yet and lived at Rekrul's home[10] and trained at Spunky's home. Although Nalepka lost in his first courage tournament[11] and hence missed to win a pro gaming license, he was invited to play test games for OGN Sparkyz. After going 4-3 and 3-4 in these, he was allowed to join the team in July.[12] The team eventually gave him a KeSPA pro-license, thus officially making the Polish a professional player[citation needed]. In the upcoming months the Protoss was referred to as the blue eyed pro Gamer, invited to several talk shows, such as the Heart to Heart[13] series, and photo shoots.[14]

He qualified for the WCG 2006 easily. In Monza Draco was placed into the "Group of Death" together with his rival Mondragon and the Korean professional Midas. Despite the Terran's reputation and experience Draco was able to advance from this group as first, without dropping a single game and causing an uproar. He beat his opponent in the Round of 16 but was defeated with a 1-2 by iloveoov in the Quarterfinals. In December 2006 Draco was invited to Beijing to compete in the IEST 2006. The tournament was highly anticipated and Draco seen as a big hope for the foreign community. However, the Protoss had troubles with the environment at the stadium, couldn't prepare well and eventually lost 0-3 in the group phase.[15] In March 2007 Draco missed to qualify both for the OSL and MSL, losing in the latter against ZerO.[16]

Shortly after Draco left Korea and joined team Excello.[17] Nalepka stated in interviews that the main reasons for his departure were caused by cultural differences, the isolation and language difficulties.[18] After his departure Draco entered the qualifiers for the PGL Season 1, which he subsequently won and directly qualified. He started quite turbulent into the event itself, losing his first match against Phoenix. However, he started to improve in the upcoming week and was able to repeatedly beat Super and Testie with clear scores. In the overall final he was victorious against the former Chinese Progamer Legend and took the gold medal after beating the Korean enfury.com. Winning PGL was without a doubt his biggest achievment ever as it was the only tournament with Korean progamers which has been won by a foreigner since year 2000 when Fredrik Slayer Østervold won KBK Masters Season 2 in Korea.

Back in Poland Nalepka was knocked out in the qualifiers for WCG by MistrZZZ and Fosken. In this year the WCG organization only sponsored one ticket to the WCG 2007, so only the winner of the nationals, Dreiven, could afford the trip. Draco took over the second spot reserved for Poland, sponsored by his father's company.[19] He advanced from the group stage quite easily after beating Fenix and Midian. However, Dreiven knocked out Draco a round later, destroying the hopes of the former pro gamer. Only a month earlier, in September 2007, Draco played completely different in the PGL Season 2. In China he tried to defend his title as reigning champion and was able to knock out both other foreigners, SEn and Testie in the first week of the event. This didn't work, as Nalepka was knocked out by Devil in the Semifinals and lost to another Korean in the game for place three again. Due to his failed attempt to finish among the first four in the World Cyber Games, Draco announced that he'd retire.[20]

A few months later Nalepka participated in the Teamliquid Starleague. He finished as second in the ladder stage and qualified for the final tournament after beating HoRRoR and Cloud in the qualifiers. Draco's spree continued, when he beat Strelok, White-Ra and Nony, shortly before the American decided to go to Korea. In the finals the Polish faced IefNaij, an upcoming Protoss from Canada. The series was extremely tense and Nalepka eventually lost 2-3. In September 2008 Draco qualified for the World Cyber Games once more, but lost in the group stage of the main event in Cologne to Stork and Legend.

In the next year Draco reduced his activity to a minimum, but still finished third in the WCG Poland 2009. Since the organization would again only pay one of the player's trip to the main event, money was raised by the Polish community to support both Yayba and Draco.[21] In the group stages of the main event the Polish Protoss lost against the Chinese Toodming, the German kolll, JaeDong and Louder. In winter of the same year he won the Nostalgia Tournament, his last major tournament.

In early 2010 Draco was seeded into the Teamliquid Starleague 2 and had to face SEn in the Round of 16. He lost 0-3. Shortly after Draco retired officially in February.[3]