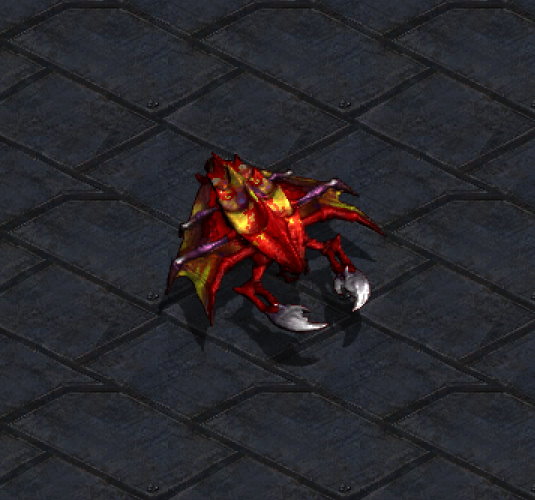 The Drone is the Zerg Worker. It can gather Minerals and Vespene Gas and has a low-damage ranged attack (range of one.) It can morph into a Zerg building anywhere on any Creep generated from Creep Colonies and Hatcheries, even when the creep is sustained by neutral or enemy buildings.

The Drone's armor, or Carapace, can be upgraded at the Evolution Chamber. The Drone and other Zerg units can Burrow after the ability is researched at the Hatchery. Drones can also be built from Larvae at a Lair or Hive; none of its properties or functions change regardless of where it is morphed.

Drones morph into buildings and are consumed in the process. Any minerals or gas in the Drone's possession are lost when it begins to morph. The building can be canceled before completion to recover the Drone and the building's associated costs. This can be used to exploit an extra +1 Supply. If a building morph is canceled while the supply is maxed, the recovered drone will surpass the available supply. A previously damaged Drone commanded to morph into an Extractor and then canceled will also be restored to full health. This can lengthen a scouting Drone's life by morphing and canceling an Extractor in an opponent's base. Morphing a Drone will cancel a Defensive Matrix.

The Drone is primarily used to mine and morph into buildings. The Zerg must replace Drones sacrificed to produce buildings as the early-game economy can be significantly impacted if they are not adequately replenished. Drones are also used to provide scouting, particularly in the early game. In ZvT and ZvP, the 9th or 12th drone is commonly used for scouting. In ZvZ, a drone scout is rarely sent out as this is a low-economy matchup where it may be preferable to conserve this early Drone for mining minerals.

Drones can also be used to Drone Drill a defended ramp or choke. Sight is required on minerals past the chokepoint for this technique to work. Zerg players can opt to upgrade Burrow to have their Drones burrow when they are attacked by enemy units, particularly during drop play.

Drones are sometimes used in Zerg vs. Zerg to make offensive Creep Colonies on the opponent's Creep. This strategy must be coordinated with a simultaneous attack, as the opponent will easily destroy an unaccompanied, morphing Creep Colony. Drones are rarely used to scout in ZvZ unless there is suspicion of a 4/5 Pool. Drones are particularly valuable in this matchup, so opponent Zerg forces will frequently target Drones during Zergling or Mutalisk attacks.

In the event of a Bunker Rush, Drones are used to kill either the SCV building the Bunker, or the Marines that are attempting to enter the Bunker. This latter strategy frequently involves several Drones being pulled from mining to explore outside the Zerg base and block any Marines before they arrive at the Bunker.

If a Terran chooses to go for a more aggressive early push, usually either immediately before or after producing Medics, to break through the Zerg's Sunken Colonies, Drones can be pulled off the mineral line to further fight off the Marines, presuming they have not broken through. The best approach is to surround the Marines/Firebats/Medics while they fight the Sunken Colonies, as the Sunkens draw all their fire, thus enabling the Drones to attack them unopposed. If the Drones are called in too late, they will be easily destroyed.

Drones on the mineral line are very vulnerable to Bio drop attacks, so Burrow can effectively hide them until reinforcements arrive. Note that the Terran can counter Burrow with a Comsat Scan, so it may be preferable to retreat the Drones away from the mineral line altogether and Burrow them in a location that is less likely to be scanned.

In the case of a Cannon Rush, Drones are used to take down the Cannons before they warp in. This is vital as the Zerg player will frequently not yet have Zerglings or Sunken Colonies to fight off the early Cannons. On Fighting Spirit, where the Protoss player will frequently block off direct contact to the Cannon with Pylons, multiple Drones must be microed against a mineral patch to force one to pass through to the back of the mineral line.

In the event of Protoss aggression trying to break the Zerg's line of Sunken Colonies, the Drones can be called off the mineral line to help defend. Instead of surrounding the units to deal damage, the Zerg should surround the Sunkens right before the Protoss charges in. This prevents melee units such as Zealots from immediately reaching and attacking the Sunken Colony. Thus, the Sunken can deal some extra hits on the Protoss units as they scramble/walk around the Drones.

Drones are very vulnerable to a drop attack, such as Dark Templars, High Templars, or Reavers, so the Burrow ability can be effective in hiding the Drones before Zerg reinforcements arrive. Note the Protoss player can still use Psi Storm on the Burrowed workers, easily destroying them in one casting, so it may be preferable for the Zerg to retreat the Drones away from the mineral line altogether and burrow them in a location less likely to receive a blind attack.

Zerg can upgrade armor to +1, enabling Drones to endure two hits from a Dark Templar instead of one. This is particularly useful in the mid to late game as a non-upgrade Drone would die to one strike from a Dark Templar without the Zerg player being notified (i.e., "Your forces are under attack"). However, with two hits required, the announcement would be made along with the Minimap flashing.