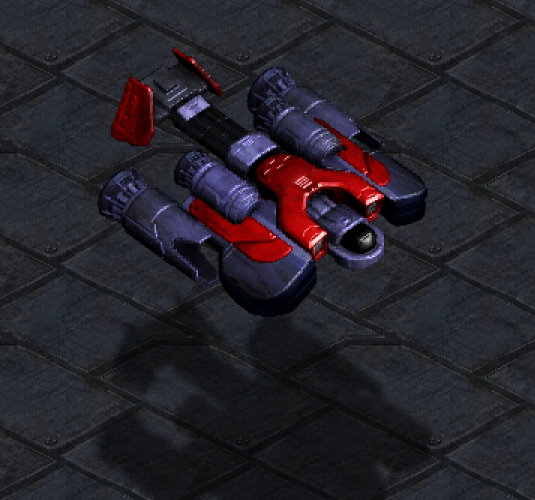 The Dropship is the Terran air transport unit. It is made from a Starport with the Control Tower add-on. It deals no attack and its Ship Armor can be upgraded at the Armory. It has no abilities that can be researched.

Compared to the other transport units, the Zerg Overlord and the Protoss Shuttle, the Dropship has the fastest movement speed. While the Overlord and Shuttle speeds can be upgraded, the Dropship has no further speed upgrade available. Like the other transport units, the number of units Dropship stored depends on the type of unit. For example, it can hold eight small units like the Marine and four medium units like the Vulture, but only two large units like the Siege Tank. Note only ground units can be transported.

Depending on the match-up involved and the strategy desired, different Drop Techniques may be employed. For example, units may be dropped en masse at the final destination as a default, but individual units may be selected for unloading while the Dropship is in flight.

Dropships are frequently used in Terran versus Zerg. One of the most commonly applied strategies involves a Dropship filled with seven Marines and one Medic. This Bio force, when combined with the Stim Pack and Marine range upgrades, is extremely effective in harassing Drones at the mineral line, destroying valuable tech buildings such as the Spire or Defiler Mound, and attacking new or sparsely defended expansions. Because such Dropships move relatively quickly and bypass the chokepoint where most Zerg forces are located, it frequently takes substantial time for Zerg reinforcements to arrive.

Dropships are a common asset after Terran acquires Science Vessels that are often used in conjunction with a main army attack. Because the seven Marines coupled with one Medic are quite efficient, the one Dropship of units can often deal significant damage inside the Zerg base under the chaos of an attack either at the front of the Zerg base or in the middle of the map.

Another common application is to load several (2-4) Dropships of units in order to completely wipe out the Zerg main base, destroying important tech buildings as well as the main Drones. This is effective in the mid to late game as the Zerg player will frequently defend its base chokepoints with Defilers, Dark Swarm and Lurkers, leaving the interior of its bases exposed to attack.

Because of the Zerg vulnerability to such surprise Dropship attacks, the Zerg opponent will frequently patrol the boundaries of its base with Scourge. The Terran player can counter this by using Comsat Scan to locate an optimal and unprotected entry point for the Dropship. Alternately, the Dropship(s) can be supported by Science Vessels, which can apply Defensive Matrix to the Dropship, thus allowing it to sustain two Scourge units. Additionally, if there is sufficient space and time to unload a few Marines, the Terran player may quickly unload and Stim a few units to destroy the Scourge, then quickly reload the Marines for the drop attack.

Dropships are often used in the Terran versus Terran match-up in the late game, not as tools of harassment, but as the main way to attack. Because Terran versus Terran is a territorial match-up where Siege Tank lines are positioned throughout the map and can be very challenging and time-consuming to destroy with purely ground forces, Dropships are used as a counter. The air transport unit can act as an invaluable asset in both mobilizing the Terran player's army as well as in conjunction with a normal attack to completely break a line of the opponent's Tanks. Filled with Siege Tanks and Goliaths, Dropships give mobility to otherwise immobile units.

As such, it is not rare to see 8-10 Dropships carrying a large portion of a Terran's army during the Terran versus Terran match-up. To counter any Missile Turrets or Goliaths during the Dropship attack, the Terran player may use Comsat Scans to locate a vulnerable location to maximize the effectiveness of the drop, as well as using Science Vessels with Defensive Matrix to sustain the Dropship as it endures enemy fire.

Dropship play is not as standard versus Protoss as it is against other races, but it is still effective. This is largely because of the possible compositions the Dropship is capable of transporting. In the mid to late game, Bio Terran armies are usually not played during the TvP match-up as the are relatively weak against Dragoons and Zealots, as well as the powerful Psi Storm. Dropping two Siege Tanks inside the main base is usually not effective as Tanks are slow in movement and have a long cooldown period before re-firing, so are quickly destroyed by Dragoons and Zealots.

A common application is to build a Starport and Dropship as soon as possible in order to drop four Vultures with Spider Mines inside the opponent's base. Outside of this build, Dropships filled with any combination of Vultures and Siege Tanks can further be used to harass or even destroy Protoss expansions. Dropship attacks composed of Siege Tanks will often take advantage of a cliff overlooking a Natural or Main base or a Pylon Wall that make defending such small attacks difficult, as it will be challenging for the opponent Dragoons to fire at the long-range Tanks.

During the late-game, players can opt to produce Dropships to give their Siege Tanks more mobility so they can harass with their Vultures. Recently, the map Outsider has encouraged Terrans to build more Dropships due to its abundance of mineral walls and cliffs.