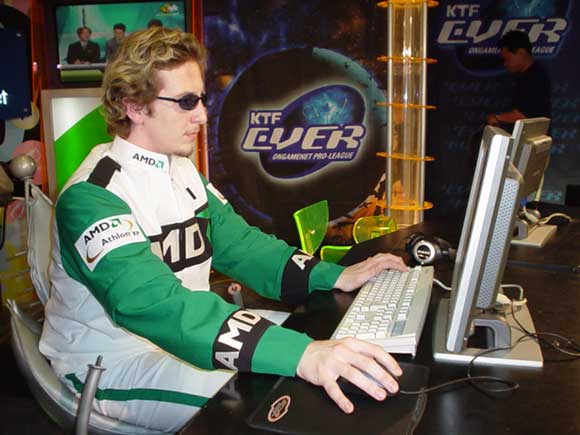 ElkY is an ex-StarCraft, now-Poker player who was one of the first Foreigners to go to Korea.

Bertrand Grospellier was a member of the AMD / Hexatron franchise, one of the few proteams to carry active foreign players in Brood War. He began his televised playing career in early 2002, and finished in mid 2004. He played terran for most of his career, and is considered the second most successful foreigner in Korea after Grrrr.

Elky's biggest achievement in Korea was reaching the semifinals of the SKY OSL in the summer of 2002. In the semifinals Elky battled the Emperor, Boxer, in a best-of-5. That series was marred by controversy as Boxer used the allied-mine trick, causing a regame. Elky fell in the semifinals to Boxer, and then lost a disappointing set to Yellow for the 3rd place spot. Nevertheless, no other player since Elky has even qualified for individual play, and his reputation as a legend is intact.

Outside Korea, Elky proudly represented his country at four WCG final tournaments. In the inaugural WCG in 2001, he made the finals after beating GoRush. There he had to face Boxer for the second time in the tournament but was unable to emerge victorious.

Elky retired from competitive StarCraft after failing to make it out of the Sping MST Qualifiers of 2005 and now plays professional poker for a living.

After the release of StarCraft II, ElkY played a few matches on the ladder, as Zerg and as Terran. He even participated in a major tournament, the eOSL Winter 2010, but was eliminated in the first round. Since then, ElkY had made some appearances in French offline tournaments, but only as a spectator.