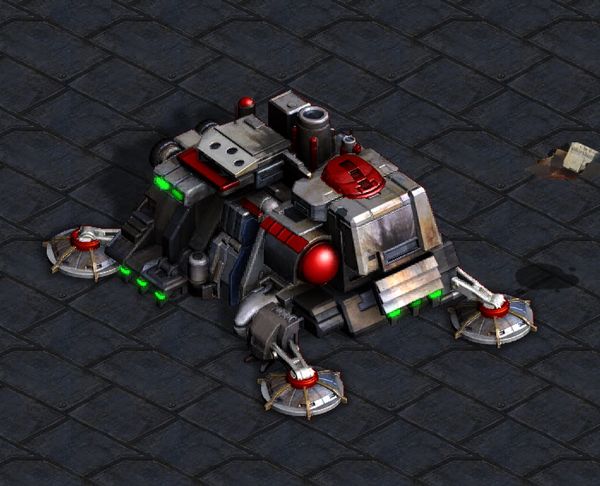 The Engineering Bay (commonly abbreviated as E-Bay) is a building constructed by Terran for the purpose of improving infantry weapons and armor. It also allows the player to construct Missile Turrets, so building an Engineering Bay is common even if infantry upgrades are not researched.

Since it is relatively cheap and has the ability to lift off, the Engineering Bay is commonly used as a scouting building once Terrans do not need it for upgrades. This is done by lifting off and moving the building to the edge of the Terran base or elsewhere on the map to gain additional vision. A common tactic used by Terran involves setting up Siege Tanks behind a ridge or other obstruction that blocks their sight range. Then, an Engineering Bay (or other building) is flown over the obstruction in order to provide the Tanks with sight, thus allowing them to fire at the unsuspecting enemy units and buildings.

The Lift Off ability of the Engineering Bay (or other building) can also be used to hide objects underneath it, thus preventing them from being seen or selected by an opponent. For example, one tactic involves hiding spider mines underneath the floating structure to prevent them from being seen and targeted by a Protoss opponent's dragoons. Alternately, a floating Engineering Bay can be used to conceal a Missile Turret, making it more difficult for focus fire from Mutalisks.

Engineering Bays are sometimes used to delay the opponent's expansion by building it at the location where a Hatchery, Nexus, or Command Center would be built. Compared to Supply Depots, Engineering Bays have more hit points and a larger footprint, it blocks a larger area. Furthermore, in this tactic, the SCV actively constructing the Engineering Bay moves around over a larger perimeter, making it more difficult as a target of attack.

Because of its larger footprint, the Engineering Bay is sometimes used to construct a defensive Sim-City, particularly to seal off a ramp or entry point, alongside Supply Depots.