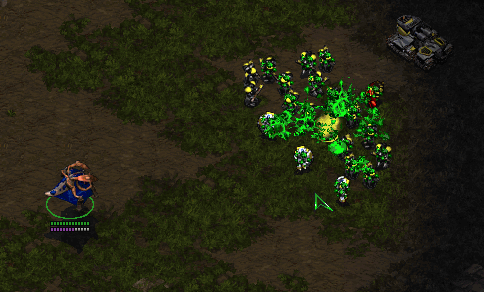 Ensnare is an ability used by the Zerg Queen. The viscous green goo expelled when a Queen uses her Ensnare ability will cover any unburrowed unit in a 4x4 matrix area, affecting them for about 25 seconds at Fastest game speed (40 at Normal speed). Units covered with the goo have their movement rate cut by half. This can cause a host of problems for the enemy. Ensnared melee units will face additional rounds of ranged fire before reaching their targets, units will not be able to spread out as effectively to fire on their targets, and retreating can become difficult. Ensnare will also reveal the presence of units hiding under the protection of a cloaking field until the goo wears off. [1]

Ensnared units move at 50% of their original speed. Units that have a speed upgrade researched move at their unupgraded speed instead. This is most notable with speed upgraded overlords.

Effects on Rate of Fire[edit]

The decrease in Rate of Fire caused by Ensnare differs from unit to unit.
Most units' attack speed is reduced by around 18% (i.e. they will deal 18% less damage over a period of time) but there are several exceptions:

These units suffer no penalty in their rate of fire when ensnared. Movement speed reduction applies normally.

Ensnare completely negates the effects of Stim both in terms of movement speed and firing rate.

The following units' rate of fire is affected by Ensnare but the exact percentage is unknown:

When a Queen is ordered to cast Ensnare, she "spits" a projectile that spreads the green "goo" to the targeted area upon impact. This creates an interesting mechanism since, unlike other casters, if the Queen is killed after she has started casting the spell but before its effects are applied, Ensnare is not canceled (like for example the Arbiter's Recall would be) since the projectile remains intact.

When the projectile lands, a "spreading" animation is played seemingly before all units in the area of effect are ensnared. This is purely aesthetic, however, since the effects of Ensnare are applied instantly the moment the projectile hits its target. So if a unit on the edge of the spell's area of effect was to move out of it after the spreading animation started but before it completed, it would still become ensnared.

Costing 75 energy and reducing movement and attack rate, Ensnare is actually a useful spell. It reduces the damage output of the affected units by almost 1/5th and severely reduces their mobility, making flanking and picking off retreating units much easier. It's rarely used in competitive gaming however due to the Queen's high gas cost (100) and because of the additional multitasking requirements the use of Queens has.
For example, in ZvT (where its most useful due to its effects on stimmed Marines) a Zerg player has to cast Dark Swarm, move his units to the correct attacking position, burrow his Lurkers with good placement, targeting Science Vessels with Scourge etc... Having to also control a Queen at the same time is a very hard task.

ZvT is the match-up where Ensnare is most effective. Its effects on Stimmed Marines having been discussed earlier in the article, Ensnare also strongly counters Wraiths despite being too high on the tech tree.

Ensnare in most commonly seen in this match-up against mass Corsairs or Corsair/Carriers. With the effects on Rate of Fire stacking with those of the Devourer's Acid Spores, Queen/Devourer becomes a powerful combo against Protoss air.

Due to the Low Eco and gas-hungry nature of the match-up, Queens are almost never seen in ZvZ. However, some players such as tsunami and redcloak advocated Hydra/Queen ZvZ as an alternative to standard Zergling/Mutaling. Recently, ZerO has incorporated the Queen into his longer games to attempt to regain the advantage after the initial battle.