Fredrik "FiSheYe" Keitel is a retired StarCraft player from Germany who played Protoss for ESA Lehnitz.

Fredrik Keitel was born on the 17th October 1984 in Berlin, Germany. He started to play StarCraft Brood War competitively in 1998 and started to qualify for major events after 2001. However, his education suffered from his high activity and the preparation for tournaments, so he eventually had to repeat the 9th grade of the German gymnasium. FiSheYe eventually graduated with the Abitur[1] in 2005 and moved out from home.[2] After he retired from Brood War in 2006, he started to play poker and moved to Austria to study Psychology in 2007.[3] The German was able to win more than $1.000.000 with poker alone up to 2010 under the name Fisheye1984.[4] In August 2012[5] the German invested and co-founded the portal Clans.de and promoted it among the scene.[6]

FiSheYe started to play StarCraft and Brood War since 1998. In the early years the German already competed and won several offline events like the Netzstatt Halle LAN. In the first years FiSheYe trained within the German scene and was member of the more traditional clans like the Fallen Angels. Before 2001 however, the Protoss was overtowered by stronger players like Kosh, kalaschni or Korn.[7] His first major tournament entry were the World Cyber Games 2001, for which he qualified as the winner of the German preliminaries. However, FiSheYe wasn't able to advance from the group stages. After winning the German Qualifiers in Weimar over Socke a year later, he could celebrate his first notable finish in Daejon. Keitel was able to beat Grrrr... in the Round of 16 in the tournament stage, but lost to the Russian Ranger and was eventually knocked out by his team mate Nazgul.

Due to his experience in the World Cyber Games and having a better training network in pro Gaming FiSheYe turned into Germany's strongest player. He was the leading figure of pG's Brood War squad and became the strongest player in the German National Team after the established elite around Korn and Kosh retired from Brood War. Together with Breakdown, Dashwriter and Socke he dominated nearly all German tournaments. 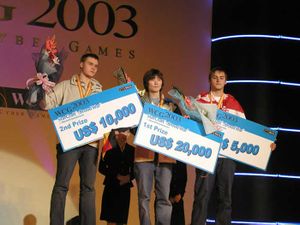 Keitel qualified for the World Cyber Games 2003 in Seoul after winning the German Qualifiers the third time in a row. He was initially placed in a group with the pro Gamer Silent Control, who he defeated on Martian Cross, despite the map favoring Terran players.[8] After beating OgerDaniel, FiSheYe was able to beat the French pro Gamer Elky with a clean 2-0 swipe in only twenty minutes, this time with Gorky Park giving the German the map advantage.[9] In the semi finals Keitel faced Grrrr..., yet another pro Gamer, who he could defeat with a 2-1. In the grand finals Keitel could win the first game on Gorky Park against ogogo, due to heavy Corsair/Reaver harassment. FiSheYe picked Terran in the second set on Korhal of Ceres and tried to open with Vultures, but was eventually strategically outplayed by the Korean, who adopted to the German's build. FiSheYe later claimed that the Zerg probably heard the Korean commentators in the player boxes.[10]. The final set was played on Dahlia of Jungle, on which the German chose Fast Expand build order. Ogogo countered with a Lurker contain and outmacroed Keitel in the long run.

After winning the Giga Grand Slam Season One against OgerEaky in Düsseldorf[11] FiSheYe announced to switch to Warcraft III and focus on the newer game.[12] Keitel eventually returned and continued to play Brood War in 2004, despite claiming that he was bored and sick of the older game[13]. However, his break from Brood War showed and the German and international scene caught up with the German Protoss.

In August and September 2004 a rivalry started between Mondragon and FiSheYe, both for the title of best foreigner and best German player. Both players had a rock solid record in Nation Wars, individual tournaments and clan leagues. Still, FiSheYe was widely received as the better player, mostly due to his massive experience in online and offline events[14]. In the second Giga Grandslam to feature Brood War, Keitel lost to Mondragon 2-0 and only a month later 5-0 in the WCG Germany 2004. Up to this point no German player could compete with the Protoss in a serious match, but thanks to Mondragon's extremely good PvZ the tide turned. Furthermore, pro Gaming used to field the majority of the German National team roster and was arguably the clan with the strongest line-up, until Mondragon's team, the Templars of Twilight, started to improve. The duel between the two split the German community in half, one side accusing FiSheYe of being a money-oriented player only and pro Gaming being a commercial team, while the other half took his side, praised the professional spirit, while accusing the Zerg of only acting humble in interviews.

In the World Cyber Games 2004 in San Francisco FiSheYe was able to advance from the group stage again, but lost to Midas in the tournament phase, after beating Trek in an intense best of three. In March 2005 the European Championship were hosted in Germany, a spin off of the World Cyber Games, sponsored by Samsung. Theoretically, the best German player from the big main event would have qualified, but FiSheYe and Mondragon were tied for that spot. In the deciding match, Keitel lost to his rival 3-4 again.[15] Two months later, in June 2005, both met again in the fourth Giga Grandslam, which the Zerg could win easily again, despite picking Terran to avoid a PvZ on Parallel Lines[16]. In July 2005 FiSheYe and his long term ally Breakdown announced to leave pro Gaming and transfer to ESA Lehnitz SSV[17], shortly before the entire Templar roster replaced the original roster of pro Gaming.[18] The swap of the teams somewhat changed FiSheYe's and Mondragon's public image a bit, since the ex-Templar now lost his reputation as charming team manager.[19]

The war seemed to be over and FiSheYe regaining his status as best German player again. He won the Rymarov LanCraft and was able to qualify for the WCG 2005, defeated only by his clan mate Breakdown in the Preliminaries in Berlin. In Singapore he advanced from group stage, with his only loss coming from XellOs. In the Round of 16 Keitel defeated Testie with a clean 2-0, despite playing as Terran. He eventually was knocked out by the overall winner foru a round later. Back in Germany the Protoss qualified for the sixth Giga Grandslam and made his way to the finals by beating almost all known German players. He eventually won the event and destroyed the uprising talent Schnibl0r in the overall finale without dropping a game.

Despite his success in late 2005, FiSheYe announced his retirement in February 2006.[20] He consequently left the Sandlot Tournament, for which he was nominated as Protoss player and other related tournaments. In August 2006 FiSheYe tried to qualify for the World Cyber Games again, but lost 0-2 to both Mondragon and Schnibl0r.

FiSheYe casually played StarCraft II in the months after its release, but never considered to play competitively again. His last appearance related to competitive play was a show match against TLO in September 2012, which he used to promote his new business - clans.de.[21]

Since FiSheYe was one of the first generation Brood War players, he couldn't rely on strategy analysis from replays or VODs. As a result he was influenced a lot by the first really successful generation of players from his teams (DEF)/(iDEF)/pro Gaming, like Nazgul, Blackman or Kosh, whom he met during the offline events he managed to qualify for. His play style was thus very versatile, ranging from multi tasking heavy build orders off one base to long term macro games. Additionally, he prepared a lot of build orders based on map and match up, changed races in his early career and abused especially the strength of Protoss on air maps. The key to his success was a combination of smart play, ability to adopt to opponents during a best of series and his enormous amount of training within pro Gaming's network. Surprisingly, the German was one of the high skilled players with a comparatively low APM.