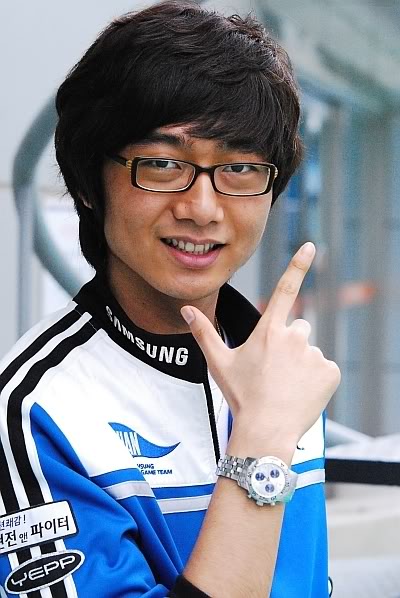 [1] Firebathero made his presence known in the middle of 2006, sporting a unique ID and a stylish appearance. His first Starleague appearance would be in the 2006 Shinhan Bank OSL Season 2, landing himself in the same Group of 24 group as another debuting rookie, Bisu of MBCGame HERO. While Bisu would go onto defeat this group, composed of veteran ChoJJa and a then-unknown JiHyun uncontested, Firebathero found his way into the Group of 16 via a tiebreaker series, disposing of ChoJJa and JiHyun. Firebathero lost in the next round against another newcomer to the scene, Iris of CJ Entus, 0-2 in a best of 3. Dejected, Firebathero found himself headed to the ODT for Shinhan Season 3. Bisu would also lose 1-2 to Goodfriend of KTF MagicNs in this same round as well.

Firebathero's presence in 2006 Shinhan Bank OSL Season 3 was dwarfed by the fact that he was surrounded by players in a Group of 24 stage that boasted much better players than those in his Shinhan 2 group. A make up of previous OSL 2nd place winner Anytime of Lecaf Oz, YellOw(ArnC) of OGN SparkyZ, and UpMagiC of eSTRO would be a formidable test for Seong Eun. Only able to defeat Anytime in his group stage, Firebathero was sent to the wildcard stage where he faced two other Terrans, Shinhan 2 OSL winner and progaming legend, NaDa of Pantech EX, and Light of MBCGame HERO. Grasping at his straws, Firebathero was able to beat Light[aLive] but not NaDa, which barely allowed him to advance to the Round of 16. Here, Seong Eun was able to oust the wiser, more experienced GGPlay of Hanbit Stars 2-1, using such strategies like Proxying a Factory into a fast Starport with 4 Barracks build, setting him up for a Round of 8 match against former OSL winner Casy of OGN SparkyZ.

It was this Round of 8 match-up that became Firebathero's calling - not only for him but for the fans he would make as well. After being able to take a win in the first game in a best of 3, Casy won both games after that to advance into the semifinals. The hours of hard work and the multiple times of barely being able to hold onto that small glimmer of hope now meant nothing in this OSL. A photo taken by Fighterforum of Firebathero being consoled by his mother melted the hearts of many.

Firebathero ended the season placing an impressive 6th place in the Shinhan 3 OSL. A month later, Bisu, whom had debuted in the same OSL as Seong Eun, stopped time and shocked the world with a mind-blowing 3-0 win against sAviOr of CJ Entus in the GOM TV 1 MSL Finals.

Firebathero could not qualify into the 2007 Daum OSL, but his hard work and increasing skill paid off. During the Shinhan Bank Proleague 2007, his team Samsung KHAN made their mark as an unstoppable force - with 2v2 teams that were near-invincible, and 1v1 players that simply could not lose an ace match - or any match for that matter. At the forefront of this domination was Stork, who had begun to rise as a top-tier player, being undefeated for his first 8 games in the Proleague. Eager not to simply follow Stork's shadow, as of this writing Firebathero has yet to disappoint, being 9-1 in the Proleague, with 8 of those wins being in TvT. Many of these wins directly resulted in the emergence of Firebathero's persona - that of a hard-working, determined, yet lovable and immature player, evidenced by his victory dance ceremonies.

The Proleague ran concurrent with the 2007 GOMTV MSL Season 2, wherein Firebathero had been posting impressive results as well. When he completed MSL Survivor, Firebathero was asked who he wanted to meet in the MSL. His response was "I want to meet Bisu. We became progamers at the same time. But he has already won a major league, and I don't want to be chasing behind him. I don't want to fall behind someone I started at the same time with." (Credit to Fighterforum, translated by LosingID8) As Bisu had already stunned the world, Firebathero eagerly awaited his chance to make himself known.

In his Round of 32 group, Firebathero was once again the underdog amongst a sea of favorites: The Emperor, BoxeR, had recently returned as a pro gamer for the Air Force and had turned heads after his completion of MSL Survivor. Nal_rA, the most consistent Protoss player of all time was also in this group as well as renowned TvT artist Canata. Despite being amongst such players, Firebathero was able to make his presence known after striding through the stage with wins against BoxeR and Canata.

Defeating two Terran titans was certainly a credit to Firebathero's quick improvement and overall prowess. On May 27, three days after his wins, he faced Cloud of OGN SparkyZ in the Shinhan Proleague in the 4th set, where Samsung KHAN was trailing. In an hour-long game, Firebathero made a devastating comeback after being at a significant economic disadvantage for half the game and defeated Cloud, forcing the match to go into the Ace round where Stork was able to bring KHAN to victory.

Making such headlines for his TvT play was necessary, as his next opponent in the MSL was the famous iloveoov of SKT T1. After losing the first game, Firebathero was able to defeat iloveoov in the next 2 games and proceed to the Round of 8. He would face sAviOr, the very player Bisu defeated to achieve fame, in a best of 5. The first game was climactic and deservedly so for a match-up of such proportions, lasting almost an hour long, Firebathero made an incredible comeback akin to his match against Cloud, and won in what many call the best game of 2007. Firebathero would end up winning the series 3-2, being one of the two Terran players in the world who could honestly say that they have defeated sAviOr in a best of 5 match-up.

Firebathero's path to glory faced an unfortunate roadblock - in the Round of 4 he was set to play his teammate and fellow rising star, Stork. Seong Eun lost the series 2-3, thereby crushing his wish to face Bisu, who was able to qualify again into the MSL finals.

Firebathero's play evolved from being a standard Terran with mediocre micro/macro into one that strives to dazzle the crowd with neat tricks, whether it be using Nukes, using Restoration against Plagues, or Proxying Barracks in the tie breaking game of a best of 5 against the best player in the world. His play has become much smarter overall, from being able to perfectly dictate the flow of the game (vs. Sea.Up 7/2/07), conducting successful comebacks (vs. Cloud 5/27/07, sAviOr 6/24/07) to even being able to perfectly predict and counter certain build orders (vs. Stork 7/5/07 game 4).

Firebathero has faced many opportunities for success. These opportunities, however, are razor thin - whether it be advancing into the next stage via wildcard/tiebreaker multiple times, or being only 1 game away from progressing. However, his career, despite the emotional shortcomings at times, was constantly improving with each Starleague appearance. Firebathero's success in the Proleague also cemented his role within his team as a star player.

Firebathero has never managed to reach the semifinals of a Starleague since his GOMTV MSL S2 run, but he has consistently managed to qualify for the MSL, only recently not reaching the Ro32 in the Avalon MSL. Firebathero was known for having superb TvZ and TvT, but poor TvP - 62% vs Terran opponents and 55% vs Zerg, but only 37% vs Protoss.

In the beginning of 2009 firebathero entered a severe slump, quickly dropping out of the Lost Saga MSL in the Ro32 and performing quite poorly in Proleague. Unfortunately for Samsung KHAN, his slump coincided with that of his teammate Stork, leading to their team's fall in standings in Proleague. Firebathero qualified for the 2009 EVER OSL where he was knocked out in the Round of 36 seeded game in two games by ZerO after defeating Jaehoon 2-0. He failed to make it out of the MSL Offline preliminaries, however. In the early rounds of the 09-10 Proleague season, Firebathero performed rather poorly, finishing rounds one and two with a 3-6 and 2-3 record respectively. This left him with a 5-9 record going into winner's league.

In 2010, Lee Sung Eun he was accepted into Air Force ACE and has consistently been their top-performing player.

firebathero is known for performing elaborate victory ceremonies when he wins a game. He has become quite a controversial player in the professional StarCraft scene due to this. Some believe that his ceremonies are bad-mannered towards the loser while others believe his ceremonies help create excitement and entertainment in the scene.