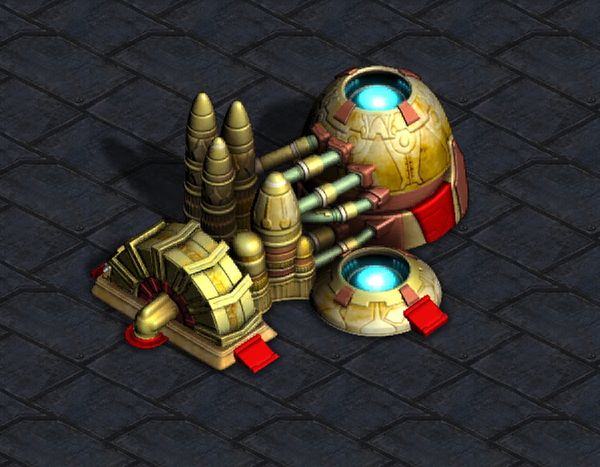 The Forge allows the Protoss player to build Photon Cannons, a highly versatile and cheap defensive structure. It also allows the Protoss player to access three upgrades: ground attack, ground armor and shields. Ground attack gives bonuses to all non-robotic Protoss ground units whereas ground armor gives bonuses to all Protoss ground units and shields give bonuses to all Protoss units and buildings. The Forge allows level 1 upgrades in each of these but requires the Templar Archives to access the 2nd and 3rd level of upgrades in ground attack and ground armor and the Cybernetics Core to access the 2nd and 3rd level of shield upgrades. The Forge must be built within the Pylon Psionic Matrix, but if the Pylon were to be destroyed by the opponent, the Protoss player would still be able to warp in Cannons.

Analogous to the Terran Armory and Zerg Evolution Chamber, the Forge does not build any units, but offers a variety of research upgrades. The Forge displays an animated rotating cylinder as the upgrade actively proceeds.

In mid to late games, it is common for the Protoss player to build multiple Forges to enable simultaneous upgrades in all match-ups.

In the PvZ match-up, in build orders such as the Fast Expand, the Forge is built very early on. Furthermore, its building position, in conjunction with the Pylon and Gateway, in forming a robust Sim-City is vital in preventing a Zergling Run-by by the Zerg opponent.

In the PvT match-up, the Forge may not be built until the mid to late game, as Cannons are frequently not built until the third or more Protoss base. The Forge is sometimes incorporated as part of a wall-in, along with Pylons, to close off an entry-way of an expansion base, thus evading Vulture harassment.

In the PvP match-up, the Forge is similarly delayed until the mid to late game as resources are tightly managed in this mirror match-up. The Protoss player will often opt for mobile cloak Detection in the form of Observers instead of Cannons. In addition, the Protoss player will often elect to build attack units rather than spend the minerals necessary to invest in the Forge.