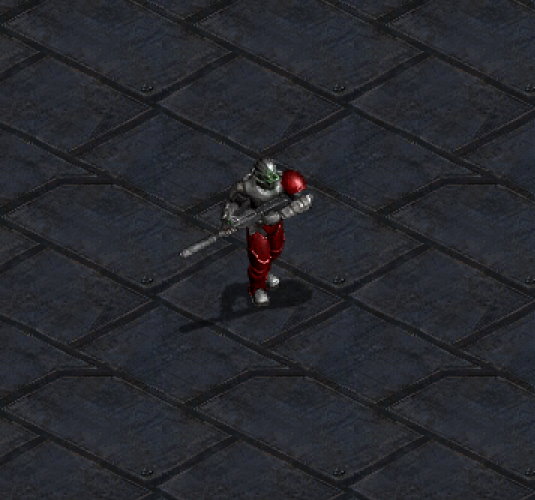 The Ghost is a specialised infantry-type spellcaster unit built from the Barracks once an Academy and Science Facility with an attached Covert Ops have been constructed. The Ghost has a long ranged attack that deals 10 concussive damage at a rapid rate, but its real power lies in its special abilities. Ghosts are able to cloak, use Lockdown grenades, and direct nukes to their target.

The Ghost is the thinnest unit in StarCraft, able to fit through the space between the two Assimilators after they are destroyed on the structure-block-island maps Troy and Battle Royal, something no other unit is able to do.

Cloaked Ghosts don't fire at opponents unless they are on Hold Position or enemies are manually targeted with the Attack command.

With an equipped Nuclear Silo, the Ghost is able to call down the Nuke within his visual range. This is the only special ability Ghosts have that does not need to be researched.

When a Nuclear Strike is ordered, the Ghost will move in range and target the spot. A blinking red dot will appear at the target, and a nuclear missile will be launched from a Nuclear Silo. All players are notified of the nuclear launch with an audio and a text message saying "Nuclear launch detected."

For a short time during the launch, the Ghost will remain stationary and cannot be given any commands besides "cancel". The Ghost is very vulnerable during this period so most commanders outfit and activate its Cloak ability before launching the nuke. If the Ghost is killed during this period or decides to abort, the Nuclear Strike fails, and the Nuke is lost. Shortly after the Ghost regains the movement ability, the warhead will descend onto the targeted point and detonate. If the Ghost is not immediately moved away, it will die from the blast as the Nuke's damage radius is quite large. However, Ghosts with the Ocular Implants upgrade are able to call down a Nuke from outside the blast zone, as it increases the Nuke range (as well as sight).

The Nuke does damage equal to 2/3rd of the maximum Hit Points of the units and buildings in range, or 500 damage - whichever is greater.

These are researched at the Covert Ops add-on.

The cloaking ability is usually only researched and used for launching nuclear strikes. It works exactly like the Wraith's Cloaking ability.

Units that have been "locked down" cannot move or be issued orders, but can be attacked, repaired, and targeted by other abilities. Using Lockdown is especially useful against powerful mechanical units (Carriers, Battlecruisers). It is occasionally used to neutralize an Arbiter before the Arbiter can Recall Protoss units into a Terran base.

Generally not a good idea since Zerg usually have a lot of Overlords hanging around in their bases. Also, Lockdown is useless, as it cannot target biological units. However, Casy used Ghosts and nukes successfully against hOya - [1] There were some guides suggesting using a drop consisting of one or two Ghosts and a few Medics which would be used to Blind the Overlords, but this has never happened in a televised level game.

Nukes can be very effective against large metal forces, as they can be lockdowned and nuked in quick sequence. Another effective use of TvT nukes is targeting supply depots; they have 500 hp, and are usually grouped close together in the late game.

The Ghost can use Lockdown to disable key units such as Shuttles, Arbiters, and Carriers. Nuking is especially effective against Protoss in conjunction with the Science Vessel's EMP shockwave.

In one of Boxer's famous nuke rush games, a very unusual Terran unit composition was used, including a Science Vessel to EMP Nexuses and detect observers, a Medic to blind Observers, a Ghost to cloak and nuke the Nexus, and various bio and mech units to help defend the Ghost while the nuke is being spotted.